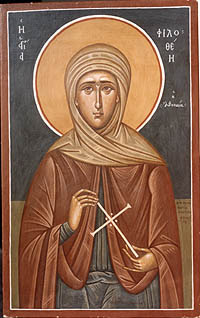 "The Monastic Martyr Philothea was born in Athens in 1522. Her parents, Syriga and Angelos Benizelos, were renowned not only for being eminent and rich, but also deeply devout. Often the kind-hearted Syriga had implored the Most Holy Theotokos for a child. Her fervent prayers were heard, and a daughter was born to the couple. They named her Revoula.

The parents raised their daughter in deep piety and right belief, and when she was twelve years old they gave her away in marriage. Her husband turned out to be an impious and crude man, who often beat and tormented his wife. Revoula patiently endured the abuse and she prayed to God, that He might bring her husband to his senses. 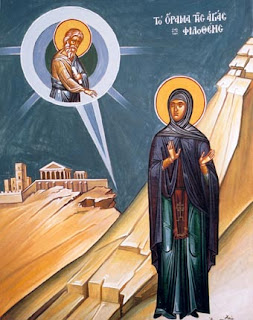 St. Philothei beholding St. Andrew the First-Called in a vision, telling her to build a convent dedicated to him (http://www.iconography.gr/en/works_st_philothei.htm)

After three years Revoula's husband died, and she began to labor in fasting, vigil and prayer. The saint founded a women's monastery in the name of the Apostle Andrew the First-Called (November 30 and June 30). When the monastery was completed, the saint was the first to accept monastic tonsure, with the name Philothea.

During this time Greece was suffering under the Turkish Yoke, and many Athenians had been turned into slaves by their Turkish conquerors. St Philothea utilized all her means to free her fellow countrywomen, ransoming many from servitude. Once, four women ran away from their Turkish masters, who demanded that they renounce their Christianity, and took refuge in the monastery of St Philothea. 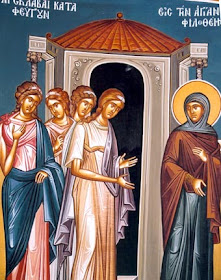 The Turks, having learned where the Greek women had gone, burst into the saint's cell, and beat her. They took her to the governor, who threw the holy ascetic into prison. In the morning, a mob of Turks had gathered, and they led her out of the prison. The governor said that if she did not renounce Christ, she would be hacked to pieces.

Just when St Philothea was ready to accept a martyr's crown, a crowd of Christians assembled by the grace of God. They pacified the judges and freed the holy ascetic. Returning to her monastery, St Philothea continued with her efforts of abstinence, prayer and vigil, for which she was granted the gift of wonderworking. In Patesia, an Athens suburb, she founded a new monastery, where she struggled in asceticism with the sisters. 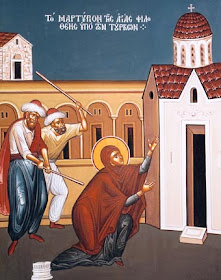 During the Vigil for St Dionysius the Areopagite (October 3), the Turks seized St Philothea and tortured her. Finally, they threw her down on the ground half-dead. The sisters tearfully brought the holy martyr, flowing with blood, to Kalogreza, where she died on February 19, 1589. Shortly thereafter, the relics of the holy Monastic Martyr Philothea were brought to the Athens cathedral church." 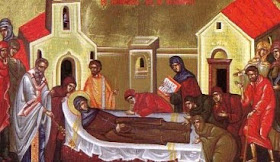 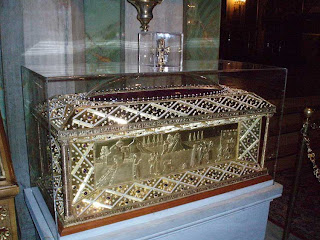 The Holy Relics of St. Philothei, in the Metropolis Cathedral of Athens (http://www.hellenica.de/Griechenland/Religion/GR/AgiaFilotheiIAthinaia.html) 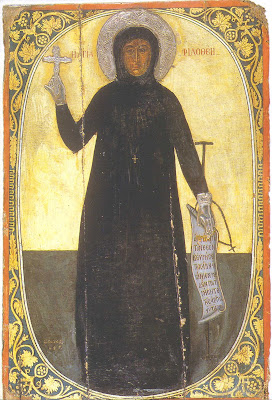 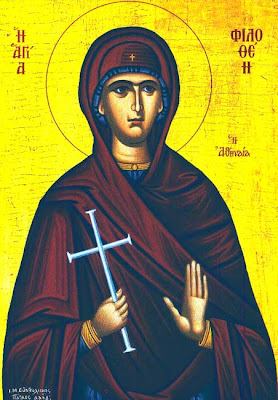 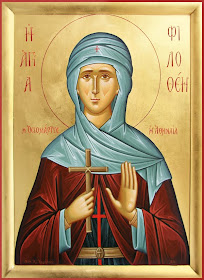 Dismissal Hymn of the Righteous One - Plagal of First Tone. Let us worship the Word
The famed city of Athens doth honour Philothei, * the righteous Martyr, whose relics it now revereth with joy; * for while living in sobriety and holiness, * she hath exchanged all earthly things * for the everlasting life through great contests as a Martyr; * and she entreateth the Saviour to grant His mercy unto all of us.

Kontakion of the Righteous One - Third Tone. On this day the Virgin
We all honour Philothei * with jubilation of Spirit, * as this day we rev’rently * worship her ven’rable relics. * For she lived her whole life working kindness and mercy; * and the righteous one, receiving a martyr’s ending, * is deemed worthy to entreat God * that all be granted * eternal life with the Saints.

(taken from the service of the Saint in English here: http://www.scribd.com/doc/20278565/19-Philothei-of-Athens; the Greek life and service of the Saint is available here: http://anemi.lib.uoc.gr/search/?dtab=m&search_type=simple&search_help=&display_mode=overview&wf_step=init&show_hidden=0&number=10&keep_number=&cclterm1=%CE%A6%CE%B9%CE%BB%CE%BF%CE%B8%CE%AD%CE%B7&cclterm2=&cclterm3=&cclterm4=&cclterm5=&cclterm6=&cclterm7=&cclterm8=&cclfield1=term&cclfield2=&cclfield3=&cclfield4=&cclfield5=&cclfield6=&cclfield7=&cclfield8=&cclop1=&cclop2=&cclop3=&cclop4=&cclop5=&cclop6=&cclop7=&isp=&search_coll[metadata]=1&&stored_cclquery=&skin=&rss=0&display_mode=detail&ioffset=1&offset=1&number=1&keep_number=10&old_offset=1&search_help=detail) 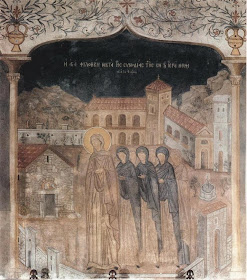 St. Philothei with her Synodeia of nuns in the Holy Monastery (source) 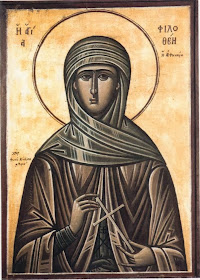 Through the prayers of our Holy Fathers, Lord Jesus Christ our God, have mercy on us and save us! Amen!
Agioi_Anargyroi at 11:09 AM