St. Polydoros the New Martyr of Cyprus and New Ephesus 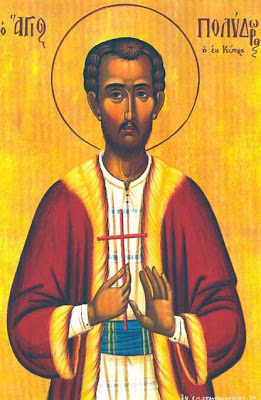 His name is not know by many people. However he constitutes a real gem in the newer history of Cyprus and a heroic figure and a new martyr of the Orthodox Church. Polydoros was born in Nicosia, Cyprus a little bit after the middle of the 18th century. He was hung in New Efessos (Yeni Kusandasi) on September 3rd 1794. Those were difficult years.Years of darkness. Years of harsh slavery. Even so, his parents Hadjiloukas and Lourdanou,who were God-respecting and devoted persons, made sure to give their child a Christian upbringing and they send him to study theology.


When Polydoros grew up, he was naturally intelligent and creative and for this reason, he got started in the trade business. For his work, he began to travel in various parts of the world including Egypt. For a time, he followed the advice of his parents, and was careful about who he made friends with and their voices echoed permanently in his ears and restrained him from getting into bad company. However with time his attention became weak. In one of his travels in the country of the Nile, he became acquainted with a rich renegade from Zakynthos and went under his service.

As soon as he reached his door and the demoniac saw him he screamed:

-“You here? You here? What have you come to do? What do you want from me?”

The priest without losing time, took the holy relics from his bosom and made the sign of the cross towards the sick man.

The priest approached. He put the relics and the piece of the rope above, and O! the wonder! The sick man made a loud cry and then calmed down. The demon had fled and the man had become well again.
b) In those dangerous and black days when Hellenism, on account of our sins, was uprooted from the cradle of Asia Minor and was chased out, a Hieromonk, the Chancellor of the Holy Metropolis of Ephesus Kyrillos Psyllos grabbed the holy skull of the martyr to save it. The furiousness of the Turks against clerics and the control over them to seek them out was unbelievable. Their fury was directed further against the churches and the holy relics. When they uncovered clerics or other people holding icons, relics, etc., they slaughtered them without discussion. The act of the Chancellor was very bold, and had they found him, he would have paid immediately with his life. This pious worker of Christ however was decisive. He dressed like a gerontissa [an Abbess, but in this case it might just mean an old woman], and took with him his very-precious treasure, made his cross and left. An endless line was waiting before him to be searched. As if arriving at the Turkish prison for the search, the Turks were furious. They had uncovered some in disguise and were furious. At that hour when the faithless reviled and beat their victims and screamed in terror the disguised Kyrillou came to be searched.

The pious cleric, without losing his composure, clenched the skull of the Saint to his chest and whispered inside himself:

-“O Saint Polydoros, save me.” And he saved him.

-"Hurry up Turkish woman", the Turk cried and pushed him ahead. In a short time the hieromonk was found dropped into a boat of salvation with his treasure. How did this happen? He did not remember. He didn’t understand. He was saved along with the holy skull of the martyr. When he arrived in Athens, he deposited it in the Holy Church of St. Catherine in the Plaka. There it is found today. Tens of the faithful go every day to venerate it. And thousands every year on September 3rd, which is his feast day, hasten to honor the martyr, the renegade who repented and sought His grace. To fall is a dreadful evil to man. Very dreadful! Great is the worth of repentance. Very great. The fall destroys, degrades. Repentance reinstates, saves. Reinstates man to his father’s house. And it saves him. It makes him “a fellow citizen of the saints and the house of God” In reality! How beautiful it is for men to constantly remember this truth!
(amateur translation of text from: http://www.synaxaristis.googlepages.com/3σεπτεμβριου)

Apolytikion Of St. Polydoros in the Third Tone (amateur translation)
A great boast of Levkosias- a great protector are you of Ephesus- a great glory of the two cities, of a sacred offspring were who shown to be by the purple of your blood, and intercede with Christ God, Polydoros, that we may be delivered from dangers and sorrows.
Through the prayers of our Holy Fathers, Lord Jesus Christ our God, have mercy on us and save us! Amen!
Agioi_Anargyroi at 8:09 AM