The wondrous icon of Christ of Latomos 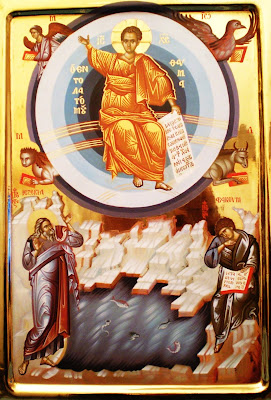 Icon depicting the miracle of Christ of Latomos (Source: www.eikonografos.com)
On the wondrous, not-made-by-hands icon of Christ of Latomos Monastery
St. Theodora was the Christian daughter of Maximian (286-305), co-emperor with Diocletian (284-305). She was baptized a Christian by the Bishop of Thessaloniki, St. Alexander (commemorated May 28th), who was later a participant in the First Ecumenical Council. Taking on her new Christian responsibilities, she was troubled by her idolatrous parents, so she told them that she suffered from some sickness, and she as a result sought (for health reasons) to build a house and a bathhouse for herself in the north part of the city. The place was named Latomia because there were stones there that were used to build the church. Immediately after the workers finished the buildings, she converted the bathhouse into a church, under the guidance of the Bishop of Thessaloniki, St. Alexander. She ordered an iconographer to create a mosaic in the eastern apse depicting the Most-Holy Theotokos. When he was finishing the icon, he was struck with amazement, for the next day, the face of the Theotokos no longer appeared, but that of Christ on a light-bearing cloud, surrounded by the four symbols of the Evangelists, and the Prophets Ezekiel and Habbakuk.

This miraculous occurrence the iconographer shared with Theodora, who wanted to keep it a secret. However, one of her servants informed her mother of what had happened. She called Theodora to give an explanation for what had taken place, and also to participate in sacrifice to the goddess Artemis for the salvation of her father Maximian, who was away at war with the Sauromaton. Theodora refused to reveal the existence of the icon and also to sacrifice to the idols. When her father had learned this, he had her locked in prison, where she received a martyr's death. The church that she build was burned, however, the icon remained unharmed, as St. Theodora had previously had it covered with plaster.

St. Senouphios the Righteous - Commemorated March 25th (http://www.imth.gr/default.aspx?lang=el-GR&loc=1&&page=147&saintid=134)
"Sometime in the reign of the iconoclastic emperor Leo V “the Armenian” (813–820), a monk named Senouphios “in the hills of Nitria in Egypt” heard a voice from heaven directing him to go “to the monastery in Thessaloniki called ‘of the stonecutters’ (Latovmwn).” Senouphios “had been begging God for a long time to be allowed to see him as he would come to judge the earth”; hearing this clear answer to his prayer, he set off at once with only his cloak and staff. After many adventures he arrived in the distant metropolis, only to be told by the monks that there was no image in Thessaloniki like the one he was seeking. Dejected by the thought he had been deceived by the Devil, the old monk returned to Egypt—only to have the heavenly oracle repeated more urgently. Once more he trudged the long way
back to Thessaloniki. This time he was rewarded. As he sat alone one day in the sanctuary of the Stonecutters’ Monastery,
“Suddenly there was a storm and an earthquake and, moreover, thunder and such a disturbance that it seemed the very foundations of the sanctuary were shaken. And immediately the mortar and the brickwork with the ox hide that overlay the sacred representation of the Lord . . . were stripped off and fell to the earth. Those sacred features of Christ appeared, shining with fiery appearance like the sun in the midst of the cloud. When the old monk, standing in the midst of the sanctuary, saw this, he cried aloud, “Glory to you, O God, I thank you,” and relinquished his blessed soul.”
(In search of the early Christians: selected essays, By Wayne A. Meeks, Allen R. Hilton, H. Gregory Snyder)

Picture of the wondrous, not-made-by-hands icon of Christ of Latomou Monastery that exists to this day (http://www.culture.gr/h/2/eh2562.jsp?obj_id=1548&mm_id=4664)
Overview of the icon
"Christ sits on the rays of a gold rainbow in an aureole of blue light. Youthful, he wears a golden chiton and raises his right arm while holding an open scroll in his left hand. His scroll reads, "Behold our God in whom we hope and rejoice in our salvation, he will give rest to this house" (Isa. 25:9).'

His hands and feet bear the marks of the Crucifixion. Next to his head is the inscription, 'Jesus Christ of the miracle of Latomos." The halo of blue light surrounding his figure is composed of seven rings. The four apocalyptic symbols of the Evangelists emerge from the fifth ring of the mandorla. Clock- wise from the top left, these are Matthew, John, Luke, and Mark; their initials are inscribed above their heads.' Below this vision is a mountainous landscape that gradually descends into a water basin, where seven fish swim. On the two sides of the rocks stand the figures of the prophets Ezekiel and Habakkuk, identified by inscriptions above their heads." Ezekiel is depicted as an elderly man dressed in a chiton, standing with arms raised and palms open to the viewer in a gesture of awe and amazement. Habakkuk is represented as a youth seated on the rocks; he has propped his chin in his right hand and on his lap holds an open book with the written message, "Son of Man, eat this scroll" (Ezek. 3:1).18 The whole scene is imbued with a blue light that emanates from the halo above and highlights the draperies, the rocky mountains, and the waters. The setting, lyrical with gold and blue light, conveys the essence of the scene: a theophany."
(http://www.jstor.org/pss/1291835) 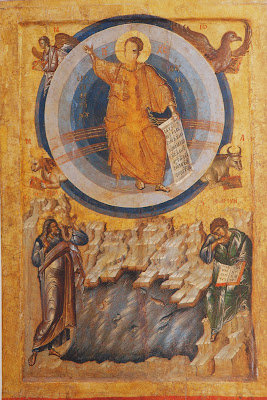 The 14th Century "Poganovo" icon that depicts the miracle of Christ of Latomos (http://upload.wikimedia.org/wikipedia/commons/d/dc/Revers_Poganovo_Icon.JPG)
Apolytikion in the Second Tone
We worship Thine immaculate icon, O Good One, asking the forgiveness of our failings, O Christ our God; for of Thine own will wast Thou well-pleased to ascend the Cross in the flesh, that Thou mightest deliver from slavery to the enemy those whom Thou hadst fashioned. Wherefore, we cry to Thee thankfully: Thou didst fill all things with joy, O our Saviour, when Thou camest to save the world.
(http://goarch.org/chapel/saints_view?contentid=167)

Through the prayers of our Holy Fathers, Lord Jesus Christ our God, have mercy on us and save us! Amen!
Posted by Agioi_Anargyroi at 11:00 AM 2 comments: