Excerpt from the Encomium on St. John the Theologian by St. Theodore the Studite

Christ is risen! Truly, He is risen!
The following is an excerpt from an encomium by St. Theodore the Studite on St. John the Theologian. It is a truly beautiful homily, and I have yet to find it translated, so I have started by translating a small piece. May the Theologian (along with St. Theodore) intercede for us all! 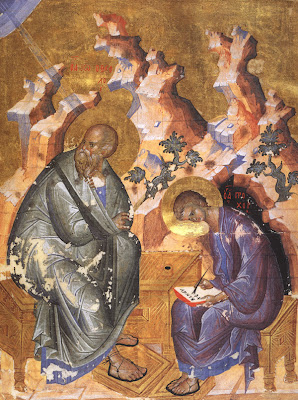 St. John the Theologian, and his disciple, St. Prochoros (http://ia600102.us.archive.org/13/items/Icoane/IoanEvanghelistul06.jpg) 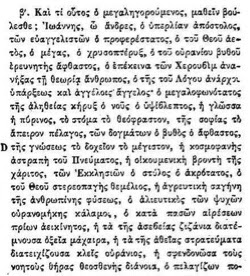 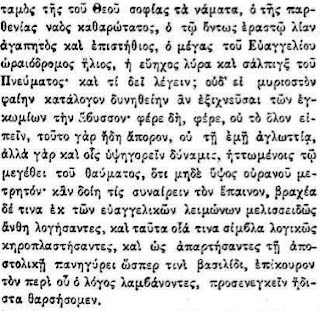 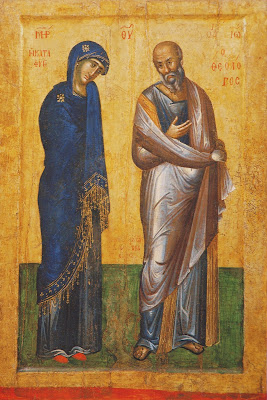 The Theotokos "Kataphygi" ("Refuge"), and St. John the Theologian (http://upload.wikimedia.org/wikipedia/commons/9/9b/Avers_Poganovo_Icon.JPG)
Excerpt from an Encomium on St. John the Theologian, by St. Theodore the Studite (Amateur translation)
And do you wish to learn who was this great man? John, O men, the very early apostle, the pronounced of the evangelists, the great and golden-winged eagle of God, the one who studied the unapproachable depths of heaven, the man who was beyond the cherubim and unequalled in theoria, the presence of the beginningless Word, and angel among angels, the most greatly-worded preacher of truth, the most highly-seen nous, the fiery tongue, the godly-phrased mouth, the endless gulf of wisdom, the unapproachable in depth of dogmas, the great container of knowledge, the lightning of the Spirit that appears to the world, the thunder of grace of the universe, the firm pillar of the Church, the confirming foundation of God, the net capturing the wildness of the human nature, the fisher of souls with the heavenly-lengthed rod, the one who ever moves to saw apart heresies, the one who cuts the weeds of impiety with a sharp knife, the one who locks out the armies of atheism with a heavenly key, the one who removes the teeth of the noetic beasts that corrupt the mind, the one who sails the waves of the river of the wisdom of God, the most-pure temple of virginity, the very early beloved one and recliner-on-the-boosm of the [One Who] is desired, the great and beautiful-roaded sun on the Gospel, and what else could you say? For this dusky catalogue of a thousand [praises] cannot do justice even if the abyss were filled with encomiums. Bring them, bring all that can be said, for though this is poor, and I have no tongue to speak, a power from above will work the greatness of a miracle, for the height of heaven cannot be counted. And if we be granted to praise him, let us as a foundation take from the honey-like flowers of his evangelical words, and beholding this,  from this honey let us rationally make wax, and as those called to the apostolic feast as to a king, as an assistant where the word is received, approach himself and take courage. 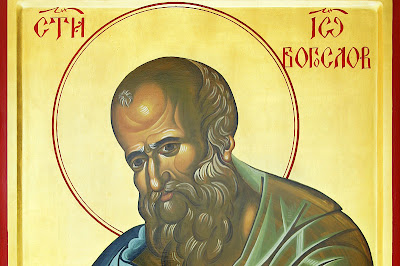 
Christ is risen from the dead, by death, trampling down upon death, and to those in the tombs, bestowing life!
Truly the Lord is risen!
Posted by Agioi_Anargyroi at 12:06 PM No comments:

Labels: St. John the Theologian, St. Theodore the Studite, The Holy Apostles, Writings of the Saints 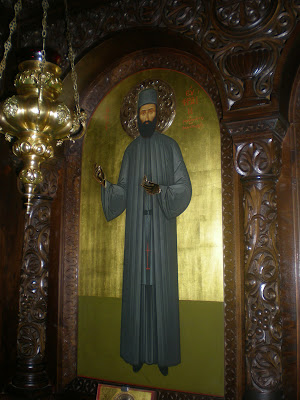 Idiomelon of the Litia in the First Tone
Beholding you, O righteous-martyr Ephraim, the words of David are fulfilled*, and we brightly praise you, for on the Amomon mountain, working virtue, as on the mountain of the Lord, innocent you were shown in hands and pure in heart, arrayed in righteousness, and you watered the flowers of dispassion with the streams of your martyrical blood, and bore fruit in struggles, and you pour forth the sweetness of wonders, by which the bitter passions are withered, and leading towards salvation those who cry: O Lord, glory be to You. [*Psalm 24:3-4]

Doxastikon of the Aposticha in the Plagal of the Fourth Tone
Glory to the Father and the Son and the Holy Spirit.

Shining with the light of grace, O Father, your soul manfully endured the attacks of the princes of darkness, as if another were suffering, and you approached Christ totally, not at all lamenting having your members eviscerated by murderous hands, but you cried to the Lord: receive my spirit, O Savior, Who for me voluntarily endured the passion, and poured forth to me eternal life. And therefore, O blessed Ephraim, ceaselessly pray, that those who bless you may be saved.
Apolytikion in the First Tone
On Amomon Mountain, you shown forth like the sun, and O God-bearer, you left for God by martyrdom, you endured barbarians’ attacks, Ephraim O righteous-martyr of Christ, because of this you ever pour forth grace, to those who piously cry out to you, glory to Him who gave you strength, glory to Him you made you wondrous, glory to Him who grants through you, healings for all! 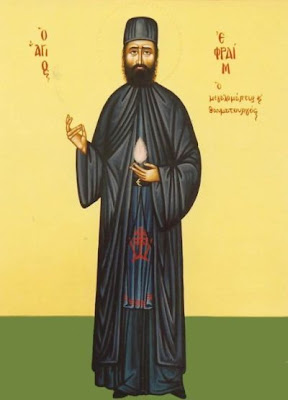 
Shining with an ascetical life, on mount Amomon, you struggled martyrically and were granted the grace of wonders by God, O Righteous-martyr Ephraim, who dwell with the Angels.

For the life of St. Ephraim, see: http://full-of-grace-and-truth.blogspot.com/2009/05/st-ephraim-great-martyr-of-nea-makri.html. 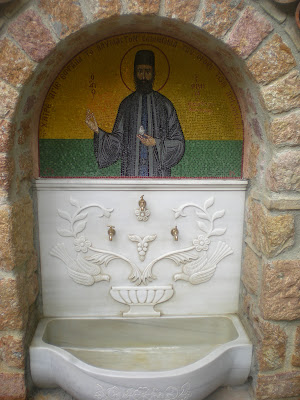 Icon of St. Ephraim of Nea Makri, and the spring of holy water in his monastery (http://www.romiosini.org.gr/DA9A0DD2.el.aspx)
Christ is risen from the dead, by death, trampling down upon death, and to those in the tombs, bestowing life!


Truly the Lord is risen!
Posted by Agioi_Anargyroi at 5:12 AM 3 comments: