St. John Chrysostom: "Unspeakable is the power of the Cross..." 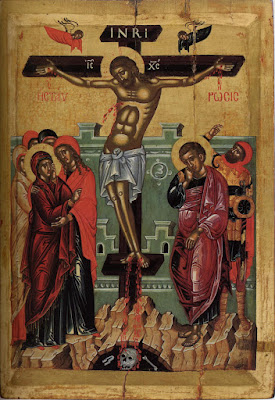 The Crucifixion of Christ (source)

"Unspeakable is the power of the Cross. For that being actually in the midst of horrors, He should have shown Himself above all horrors; and being in the enemy's hold should have overcome; this comes of Infinite Power. For as in the case of the Three Children, their not entering the furnace would not have been so astonishing, as that having entered in they trampled upon the fire—and in the case of Jonah, it was a greater thing by far, after he had been swallowed by the fish, to suffer no harm from the monster, than if he had not been swallowed at all—so also in regard of Christ; His not dying would not have been so inconceivable, as that having died He should loose the bands of death. Say not then, why did He not help Himself on the Cross? for He was hastening on to close conflict with death himself. (See Hooker, E. P. v. 48. 9.) He descended not from the Cross, not because He could not, but because He would not. For Him Whom the tyranny of death restrained not, how could the nails of the Cross restrain?"
-St. John Chrysostom, Commentary on the Epistle of St. Paul to the Corinthians


Through the prayers of our Holy Fathers, Lord Jesus Christ our God, have mercy on us and save us! Amen!
Posted by Agioi_Anargyroi at 8:01 PM No comments: