"Being true to your name, O Phanourios..." 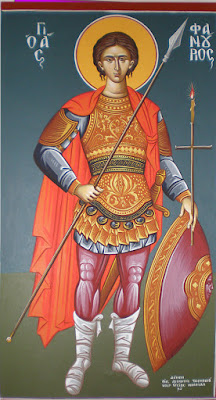 Being true to your name, O Phanourios, you radiantly shine with light upon all the Church of Christ, and you dissolve the night of temptations and dangers and trials, through the rays of your all-radiant protection, as our intercessor to the Lord.
-Prosomoion of the Praises from the feast of St. Phanourios the Great Martyr


Through the prayers of our Holy Fathers, Lord Jesus Christ our God, have mercy on us and save us! Amen!
Posted by Agioi_Anargyroi at 11:47 AM No comments: 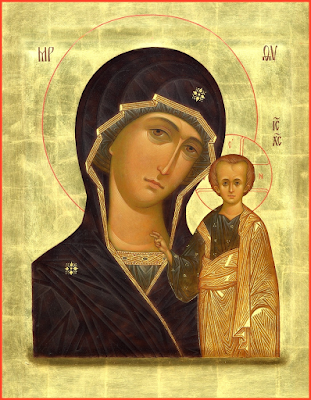 The Most-holy Theotokos and Christ (source)


A Thief Named John
A MAN NAMED JOHN was defeated and he became a thief. He became the captain of a band of one hundred thieves, but he had great reverence for the Theotokos. Each morning and evening he read the service of Supplication to the Theotokos***.
Wishing to save him because of the great reverence he had for the Theotokos, the gracious God sent a holy monk who was immediately captured by the thieves.
The monk said to them: "I beg you to take me to your captain because I have something to tell you for your own good."
They took him to the captain and he said: "Ask all the men to come so that I can tell you something."
The captain called them and they came. The monk said: "Aren't there any more?"
"I have a cook," the captain replied.
"Ask him to come." But when he came, the cook was unable to look at the monk and turned his face aside.
The monk then said to the cook: "In the name of our Lord Jesus Christ I command you to tell me who you are, who sent you, and what you are doing here."
The cook replied and said: "I'm a liar and I always speak falsely. But since you have bound me with the name of Christ, I can't but tell you the truth. I'm the devil and I was sent by my superior to work for the captain and to wait for the day when he wouldn't read the service of Supplication to the Theotokos to put him into hell. I have been watching him now for fourteen years and I have never found a day when he hasn't read the service."
The monk said: "I command you in the name of the Holy Trinity to disappear and no longer tempt Christians." And immediately the devil disappeared like smoke.
The monk then taught the thieves. Some became monks, others married and did good works and were saved. This is why I advise you all, men and women, to learn the service of Supplication and to use it in your prayers. And if you wish, take the book, The Salvation of Sinners, which contains the seventy miracles of the Theotokos, of which I told you one so that you might understand.
(source)

***Some other versions mention that he would read the Akathist (Salutations) to the Theotokos daily. 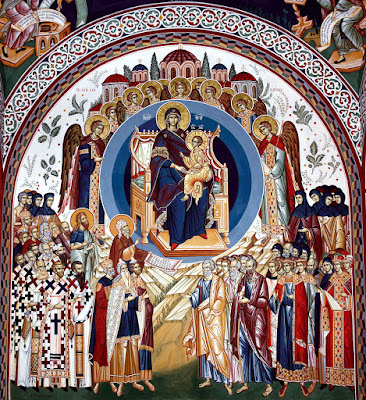 The icon depicting the hymn: "In Thee, O Full of Grace, all creation rejoices..." (source)


Most-holy Theotokos, save us!
Posted by Agioi_Anargyroi at 2:59 PM 2 comments:

"O the wonders of the Ever-virgin..." 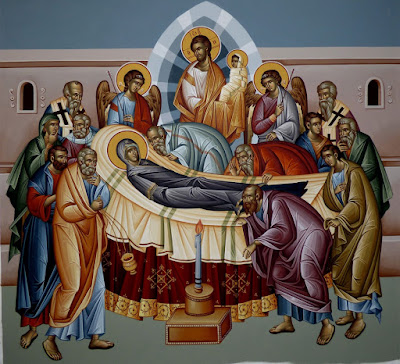 The Dormition of the Most-holy Theotokos (source)

O the wonders of the Ever-virgin and Mother of God, surpassing mind! For she dwelt in a tomb, and showed it to be Paradise, which we stand beside today, rejoicing as we chant: praise the Lord, O you works of the Lord, and exalt Him supremely unto all the ages.
-Excerpt from the Canon for the Dormition of the Theotokos


Most-holy Theotokos, save us!
Posted by Agioi_Anargyroi at 3:56 AM 1 comment: