Homily VI on the Nativity of Christ, by St. Ephraim the Syrian

Homily VI on the Nativity of Christ, by St. Ephraim the Syrian
Blessed be the Messenger that was laden, and came; a great peace! The Bowels of the Father brought Him down to us; He did not bring up our debts to Him, but made a satisfaction to that Majesty with His own goods.

Praised be the Wise One, who reconciled and joined the Divine with the Human Nature. One from above and one from below, He confined the Natures as medicines, and being the Image of God, became man.

That Jealous One when He saw that Adam was dust, and that the cursed serpent had devoured him, shed soundness into that which was tasteless, and made him [as] salt, wherewith the accursed serpent should be blinded.

Blessed be the Merciful One, who saw the weapon by Paradise, that closed the way to the Tree of Life; and came and took a Body which could suffer, that with the Door, that was in His side, He might open the way into Paradise.

Blessed be that Merciful One, who lent not Himself to harshness, but without constraint conquered by wisdom; that He might give an ensample unto men, that by virtue and wisdom they might conquer discerningly.

The husbandmen came and did obeisance before the Husbandman of Life. They prophesied to Him as they rejoiced,[saying,] "Blessed be the Husbandman, by Whom the ground of the heart is tilled, Who gathereth His wheat into the garner of Life."

The husbandmen came and gave glory to the Vineyard that sprang of the root and stem of Jesse, the Virgin Cluster of the glorious Vine. "May we be vessels for Thy new Wine that renews all things."
"In Thee may the Vineyard of my Well-beloved that yielded wild grapes1 find peace! Graft its vines from Thy stocks; let it be laden entirely from Thy blessings with a fruit which may reconcile the Lord of the Vineyard, Who threatens it."

Because of Joseph the workmen came to the Son of Joseph saying, "Blessed be Thy Nativity, Thou Head of Workmen, the impress whereof the ark bore, after which was fashioned the Tabernacle of the congregation that was for a time only!"2

"Our craft praises Thee, Who art our glory. Make Thou the yoke which is light, yea easy, for them that bear it; make the measure, in which there can be no falseness, which is full of Truth; yea, devise and make measures3 by righteousness; that he that is vile may be accused thereby, and he that is perfect, may be acquitted thereby. Weigh therewith both mercy and truth, O just One, as a judge."
"Bridegrooms with their brides rejoiced. Blessed be the Babe, whose Mother was Bride of the Holy One! Blessed the marriage feast, whereat Thou wast present, in which when wine was suddenly wanting, in Thee it abounded again!"

The children cried out, "Blessed He that hath become unto us a Brother, and Companion in the midst of the streets. Blessed be the day which by the Branches4 gives glory to the Tree of life, that made His Majesty be brought low, to our childish age!"

Women heard that a Virgin should conceive and bring forth a Son: honourable women hoped that thou wouldest rise from them; yea noble ladies that Thou mightest spring up from them! Blessed be Thy Majesty, that humbled Itself, and rose from the poor!

Yea the young girls that carried Him prophesied, saying, "Whether I be hated or fair, or of low estate, I am without spot for Thee. I have taken Thee in charge for the bed of Childbirth."

Sarah had lulled Isaac, who as a slave5 bare the Image of the King his Master on his shoulders, even the sign of His Cross; yea, on his hands were bandages and sufferings, a type of the nails.

Rachel cried to her husband, and said, Give me sons.6 Blessed be Mary, in whose womb, though she asked not, Thou didst dwell holily, O Gift, that poured itself upon them that received it.

Hannah with bitter tears asked a child;7 Sarah and Rebecca with vows and words, Elizabeth also with her prayer, after having vexed themselves for a long time, yet so obtained comfort.

Blessed be Mary, who without vows and without prayer, in her Virginity conceived and brought forth the Lord of all the sons of her companions, who have been or shall be chaste and righteous, priests and kings.

Who ever dared to speak to her son as in prayer? O Trust of Thy Mother as God, her Beloved and her Son as Man, in fear and love it is meet for thy Mother to stand before Thee!
(source)


Through the prayers of our Holy Fathers, Lord Jesus Christ our God, have mercy on us and save us! Amen!
Posted by Agioi_Anargyroi at 10:33 AM No comments:

Labels: St. Ephraim the Syrian, St. Joseph the Betrothed, The Most-Holy Theotokos, The Nativity of Christ, Writings of the Saints 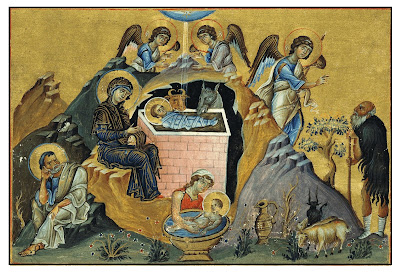 "For it was to Him no lowering to put on what He Himself had made. Let that handiwork be forever glorified, which became the cloak of its own Creator. For as in the first creation of flesh, man could not be made before the clay had come into His hand, so neither could this corruptible body be glorified, until it had first become the garment of its Maker."
-St. John Chrysostom, "Sermon on the Nativity"


Through the prayers of our Holy Fathers, Lord Jesus Christ our God, have mercy on us and save us! Amen!
Posted by Agioi_Anargyroi at 4:43 AM No comments: 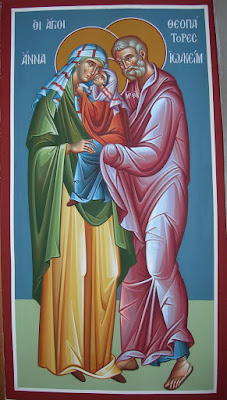 Sts. Joachim and Anna embracing the Most-holy Theotokos (source)
"O divine announcement! O strange telling! If I conceive in my womb, an Angel will be sent to her, Anna considers in astonishment, and with a loud voice cries out: glory to my God Who does paradoxical things!
-from the Canon for the feast of the Conception of St. Anna

(source)
Through the prayers of our Holy Fathers, Lord Jesus Christ our God, have mercy on us and save us! Amen!
Posted by Agioi_Anargyroi at 3:52 PM No comments: