Miracles of St. Nektarios to a Wife and Mother 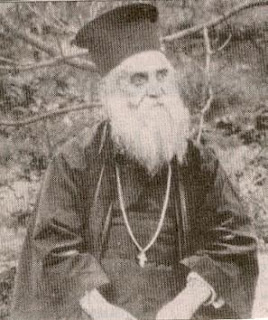 St. Nektarios the Wonderworker, Bishop of Pentapolis (http://www.groca.org/?category_name=orthodox-faith)
Note: the following is an excerpt from the book: Traveling the Walls of the City, by Nun Porphyria. She was a disciple of Elder Porphyrios, and as she would drive her taxi throughout Athens, she would meet many different people, help them with their problems, and often hear of their experiences and miracles that happened in their lives.

Miracles of St. Nektarios to a Wife and Mother (Amateur translation)
11AM on a Friday, I was driving through an area of Athens. I ascended Marne Road, when a brother of mine called from the Airport.
“Rania, where are you?”
“In Marne.”
“Come to the Airport, because there’s a lot of work here.”
“I’m coming, thank you.”
I hung up and was thinking to try and pick up a passenger, so I wouldn’t be traveling so many kilometers empty. As I ascended Alexandra Highway, a lady holding a large travel bag raised her hand. I stopped.
“Can you take me to the Airport?”
“Of course I can, I was trying to find you, sweetheart!”

“I stopped, loaded the bag, and we set off. The lady sat next to me.
“Oh! How beautiful are your icons! [i.e. on the dashboard of her taxi]” she told me.
“Yes! They are my family, I worship them!” I replied.
“And I believe greatly; I especially love St. Nektarios.”
“Did he work some miracle for you, to believe in him so?”
“Of course! Do you want me to tell you?”

...The Lady laughed. “I have cancer,” she told me briskly, “and they removed both my breasts. From the day that I was married I got sick, I suffered grave sadness.”
“Why? Don’t you have a good husband?”
“On the contrary, my husband is very good. He takes very good care of me, and economically we are very well off.”
“Then why did you get sick?”

“I don’t know! Straightaway, I fell into deep depression without reason. A neighbor of mine said that someone cast a spell on me. ‘But I don’t have enemies’, I told her. She replied: ‘I believe that Panagiota did something to you, because she very much wanted your husband.’”

“Three years passed from the day of my wedding and my sickness, when I decided to tell my mother about it. She, as soon as she heard it, took me to a priest. He read a prayer for me and told me to go to Aegina, to St. Nektarios. Aegina was very far from our island, but my husband said that we should go. And the three of us left together for St. Nektarios.”

“When we reached there, having venerated and prayed, I wanted to meet the Abbess. I didn’t know why. I asked a nun to take us to her, and this is what occurred. The Abbess received us with all her heart, as if she were waiting for us. She removed a prayer rope from her pocket, and gave it to me to wear on my hand. I put it on while my mother related what I had. Right away, I stood up and told them:

“Let’s go to the cell of St. Nektarios, for he’s waiting for us!”

“I opened the door and exited towards the cell of the Saint. The Abess asked me: ‘Do you know where you are going? Have you been here before?’”

“We reached his cell, and entering, I sat on his bed. St. Nektarios sat next to me, and spoke to me while I responded.”

“Do you want to tell us what he said?”

“No! The only thing I’ll say is that he told me not to be afraid, and that I would become well. From then, the sadness that I felt left, and was replaced by joy. Very quickly I became pregnant, and gave birth to a baby boy, whom I named Nektarios. I also bore a girl, and I named her Maria, the name of our Panagia. Later I got sick from cancer, and as I said, they removed my breasts. I suffered greatly, but St. Nektarios is always next to me. Since then it’s been twenty years. The Saint has never abandoned me. Every year on his feast, we are all there. My faith has strengthened me greatly, so that I don’t care what happens to me. I am prepared to face everything.”

Wishing to test her faith, I played devil’s advocate: “What if God takes one of your children? What would you do? Would you distance yourself from Him? Would that shake your faith?”

“Look,” she replied, “my children are His [God's]. He gave them to me, and if he wants them back, let Him take them. I would feel great pain, but my faith is unshakable. No one can do anything to shake it.”

“Is this true what you’re saying?”

“Of course! I have seen many miracles in these twenty years. That which I told you, was the first with St. Nektarios. Many more followed. The Saint is constantly next to me, and I sense him very close to me. Don’t think that I don’t love my children, because I said that He can take them. They are His, He gave them to me simply to raise them with Him. I feel proud, because He gave me very good children. With His help, of course.”

I rejoiced greatly when I heard this, and was jealous of the faith of this woman!
Amateur translation of an excert from: Traveling the Walls of the City (Taxidevontas sta Teixh ths Polhs), by Nun Porphyria (http://apantaortodoxias.blogspot.com/2011/03/blog-post_6811.html).


Through the prayers of our Holy Fathers, Lord Jesus Christ our God, have mercy on us and save us! Amen!
Posted by Agioi_Anargyroi at 3:46 AM 1 comment: 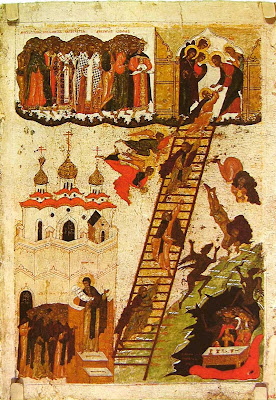 The Feasts of Great Lent: the Sunday of Orthodoxy, Sts. Gregory Palamas and John Klimakos, the Crucifixion of Christ, St. Mary of Egypt, and the raising of St. Lazarus (http://happy-school.ru/Ikona/put_posta.jpg)
Forgive me, and may God forgive us all!
Through the prayers of our Holy Fathers, Lord Jesus Christ our God, have mercy on us and save us! Amen!
Posted by Agioi_Anargyroi at 6:12 PM No comments: