A miracle of St. Anastasia the Roman 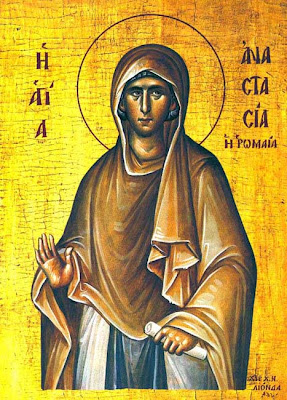 St. Anastasia the Righteous Martyr of Rome - Commemorated on October 29th (http://christopherklitou.com/icon_29_oct_anastasia_the_roman.htm)
A miracle of St. Anastasia the Roman (amateur translation)
The accident
Kosta, a young man and father of two young children, was returning from Athens to his home (a great distance) on September 11th 2002 by motorcycle. He had just arranged some work and returned tired. During the trip, the motorcycle overturned and he went flying and collided with a column. The trauma, as he himself relates, caused him to fracture ribs and pelvis, and the lower ends of five vertebrae of his spine. One of the fractures cut a vein, which led the physicians to diagnose him with a retroperitoneal hematoma due to the internal hemorrhage. This caused his doctors to throw up their hands, because this type of case does not lend itself to a surgical intervention. After 24 hours in intensive care, Kosta, exhausted from the loss of blood, was led to the operating room. “I was on death's door, I had lost three liters of blood, when the doctors decided to make an attempt at salvation. They operated on my stomach area, to not let me die, as they had told me later, without any medical attempt. The surgery was a failure, for they couldn't reach the necessary location, and simply, as they told me, they were waiting for me to die”, Kosta relates today emphatically, truly moved.

The unexplained
Curiously, however, while they were awaiting his fate, Kosta lived. “The vein closed on its own and the doctors up till today consider it a miracle”, he says. The young father remained in the hospital for ten days. Then he returned to his home for 15 days, after which time he returned to the hospital for another intervention, to clean the hematoma. On October 26th 2002, the feast of St. Demetrios the Great Martyr, he returned home, to his good wife and his two young girls. The improvement in his health, as he himself relates, was rapid. Until the sign, there was nothing that had made an impression on him.

The discussion with the Saint
On the morning of October 29th, he experienced a dream or vision that changed his life, and gave an answer to that which the doctors were all calling a miracle. He relates the following himself: “I saw a short and very young girl, who was wearing a dark greyish robe and a head covering—like a scarf—on her head come close to me. I couldn't, however, discern her face. Her presence, however, emitted an indescribable fragrance. She was walking in a cruciform manner on top of a terrible snake, to which she was indifferent. I was also struck with color of the sky and the unprecedented—bizarre—first light of the day. Before I could ask her who she was, she stopped 4-5 meters in front of me and said: “I am St. Anastasia. I saved you.” Her manner was as if she had not done anything special, most likely that I not feel indebted to her action. With an especially challenging and skeptical manner I asked her: “Why did you save me?” And she with her manner showed how she was simply following some command, as she replied: “Because Panagia asked me to.” As Kosta relates, during this discussion, the presence of St. Anastasia had created an atmosphere of indescribable sweetness. 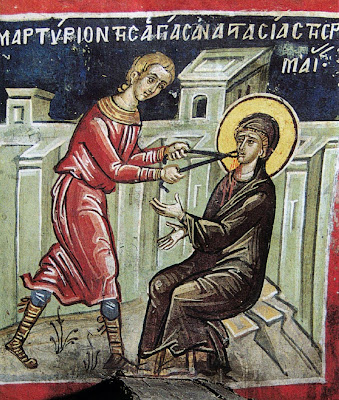 The martyrdom of St. Anastasia the Roman (http://pravicon.com/images/sv/s0160/s0160003.jpg)
Kosta awakened astonished from the dream-vision, and got up and called a friend of his who was a monk. He was literally startled by the morning telephone call. Kosta did not reveal his dream to the monk, but asked him simply: “Do you know of a St. Anastasia?” As he told us, he had heard of St. Anastasia the Deliverer-from-potions, but had never called upon her. “Which St. Anastasia, the Roman who celebrates today?” replied the monk. The monk's reply further shocked Kosta. He avoided, however, to tell him anything from his dream. 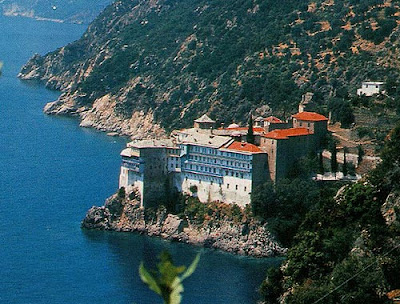 Gregoriou Monastery, Mount Athos (http://mountathos.gr/active.aspx?mode=el{1aa23724-7625-4fd3-bd84-ed33629a0568}View)
A few days later, Kosta received a telephone call from a priest friend of his, who was pleased to learn of the progress of his recovery. During their discussion, he told him that when they meet, he would tell them about a dream of St. Anastasia the Roman, in order to answer some of his questions. The priest's insistence, however, caused Kosta to tell him what had happened. “Kosta, do you know where I am right now, and why I insisted on you telling me?” the priest asked him. And he continued without waiting for a response: “I am at the Holy Monastery of Gregoriou on the Holy Mountain, and in a short time we will venerate her Holy relic that is found in the Monastery, along with other pilgrims.” Kosta was astonished a second time. “Do you understand the shock that I experienced?” he said. 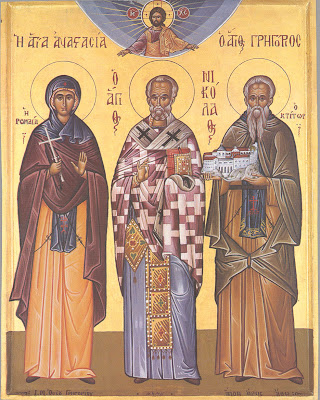 The holy patron saints of Gregoriou Monastery: Sts. Anastasia the Roman, Nicholas the Wonderworker, and Gregory the Founder (http://pravicon.com/images/sv/s0160/s0160006.jpg)
Because of his work, Kosta visited Holy Churches and monasteries nearly every day. Thus, in the April of 2004, he recounted to a monk outside of the gate of his monastery in Loutraki, Corinth, his dream. During their discussion, a car passed by. The driver and his little girl were known to the monk. They greeted him and the monk told Kosta: “This man...Kosta has a tama to build a chapel in the area in honor of St. Anastasia the Roman. Because of this he named his girl Anastasia.”

All of this had literally strengthened Kosta's faith as unshakable, and also that of his family and friends. He himself is at the feast of St. Anastasia every year at the Monastery of Gregoriou and maintains a relationship with St. Anastasia in his daily prayer. It is certain that this acquaintance with St. Anastasia changed his whole life. Amid this relationship, he placed as his priority the will of Christ, and daily experiences the miracle of the Orthodox faith. Glory to God!
(http://proskynitis.blogspot.com/2010/10/blog-post_29.html) 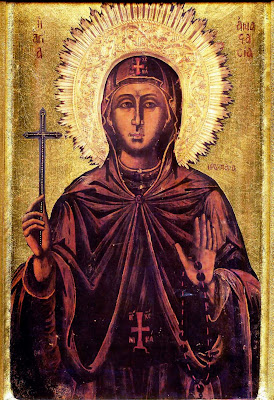 St. Anastasia the Roman (http://www.rel.gr/photo/displayimage.php?album=26&pos=171)
Troparion - Tone 4
Your lamb Anastasia, calls out to You, O Jesus, in a loud voice: "I love You, my Bridegroom, and in seeking You I endure suffering. In baptism I was crucified so that I might reign in You, and I died so that I might live with You. Accept me as a pure sacrifice, for I have offered myself in love." Through her prayers save our souls, since You are merciful.
Kontakion - Tone 3
Purified by the waters of virginity, righteous Anastasia, you were crowned by the blood of martyrdom. You grant healing and salvation to those in need, and who call on you from their hearts, for Christ gives you strength, pouring out on you ever-flowing grace!
(http://www.oca.org/FStropars.asp?SID=13&ID=103099)
Through the prayers of our Holy Fathers, Lord Jesus Christ our God, have mercy on us and save us! Amen!
Posted by Agioi_Anargyroi at 11:18 AM 2 comments: