The Synaxis of the Holy Kollyvades Fathers 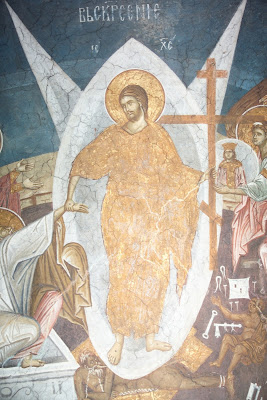 Detail of fresco of Christ's Holy Resurrection (taken from: http://www.srpskoblago.org/Archives/Decani/exhibits/Collections/GreatFeasts/CX4K1804_l.html)
On the Saturday of Bright Week, a service has been written to commemorate all of the Saintly Holy Fathers of the so-called "Kollyvades" movement. These were monastics primarily from Mount Athos who taught adherence to Holy Orthodox dogma and tradition amid waves of westernism and secularism during the years of the Turkish occupation of Greece. The ranks of such Holy Fathers include some of the Church's most beloved Saints: St. Nikodemos of the Holy Mountain, St. Makarios (Notaras) of Corinth, St. Nektarios of Pentapolis, St. Kosmas Aitolos, St. Sabbas of Kalymnos, St. Athanasius of Paros, St. Paisios Velitchovsky, St. Nicholas Planas, and so many more. The following quote (from mountathos.gr) discusses the Holy Mountain and the Kollyvades:

"In the mid 18th century a grave theological debate developed all over the Holy Mountain in connection with the issues of the holding of memorial services for the departed, frequency of Holy Communion, and other matters relating to the exact observance of Orthodox tradition. The starting-point for this prolonged controversy was the building of the kyriakon at the Skete of St Anne (1754). The question arose as to whether the commemoration of the founders and benefactors should be held on Saturday or Sunday, and with what frequency the monks should receive Holy Communion. The debate divided the monks, and those who insisted that the memorial services should be held on Saturdays were mockingly dubbed 'kollyvades'. It seems, however, that, behind their apparent obstinacy, they had a profound knowledge of church tradition and fought hard for its authenticity and for its purification from adulteration. Thus the name of 'kollyvas' became a title of honour and the movement was responsible for a profitable and beneficial regeneration and renewal. Indeed, this devout movement was led by three saints: Makarios Notaras, Nicodemus the Athonite, and Athanasios of Paros, and they numbered among their supporters and sympathisers distinguished scholars such as Neophytos Kafsokalyvitis, Christophoros Artinos, Agapios of Cyprus, Iakovos the Peloponnesian, Pavlos the hermit, Theodoritos of Esphigmenou, and a number of others. Some of them chose voluntary exile and took refuge in mainland Greece or the islands, where they founded scores of monasteries, of which a fair number survive today. Thus we see Makarios Notaras on Chios, Niphon on Skiathos, Dionysios of Skiathos on Skyros, Ierotheos on Hydra, with numerous disciples and friends of that Athonite tradition which has nourished monks and saints. The monasteries which they founded were noted for their vigour and service. The Ecumenical Patriarchate by decisions of the Holy Synod finally put an end to the 'kollyvades' issue, by ruling that memorial services could be held as circumstances demanded and that Holy Communion, with the proper preparation, could be received frequently, and that the life of the substance, and not the aridity of the form, was to be adhered to.

Sts Nicodemus the Athonite, Makarios Notaras, and Athanasios of Paros are the typical representatives of the renascence on the Holy Mountain, and of the spirit which prevailed. They were the authors of widely circulating books which had their effect on the souls of the enslaved Greeks, and their works continue to be re-issued even today. The seal was set on the Athonite theological spirit of the time by the publication of the 'Philokalia of the Ascetic Fathers' (1785), a publication which was a landmark in theological literature.

In a difficult period such as that of Turkish rule, the Holy Mountain kept its lamp perpetually burning, and was able, moreover, to hand on the flame to the peoples of the Balkans and the North. Thus the exchange of visits and the sojourn of many on the Holy Mountain of Athos gave rise to an important spiritual and cultural movement. The quiet of Mount Athos acted as a school of superior philosophy in which not only asceticism and vigilance, but also study in its rich libraries, the translation of rare texts, concern for art, and the transmission of a spirit of service and self-sacrifice were cultivated. The work of the starets Paisios Velitskovski, the reformer of monasticism in Romania and Russia, after his departure from Athos, was particularly inspired. Similar work was carried out by his disciple the Blessed Goergios of Tsernika († 1806) in the monasteries of Moldavia, where hundreds of monks were his spiritual children, by the Blessed Sophronios Vratsis († 1813) in Bucharest, while the Blessed Antypas († 1882) from Moldavia went to Jassy and finally reached the Monastery of Varlaam in Finland. The Russian Saint Siluan the Athonite († 1938) continues to teach through his much-translated biography by Archimandrite Sophronios († 1993) even after his blessed death. Yet again the illuminating influence of the universality of the Holy Mountain is apparent.

The Athonite monastic community has never kept the fragrance of the blossoming of its virtues all for itself. In spite of the harshness of enslavement to the Turks, penury, the difficulties in travelling and the many perils, the Athonite monk in his humble cap went everywhere in the Greek world, to bring the sober preaching of salvation, of redemption, of consolation, of support, and of hope - fiery missionaries like Cosmas of Aetolia, who crowned his long preaching mission with martyrdom, the Blessed Anthimos Kourouklis, who travelled the islands and built churches and monasteries, the Blessed Makarios Notaras, who on the islands of the Aegean created real centres of refreshment and aspiration, while similar work was carried out by his companion Blessed Athanasios of Paros, Arsenios of Paros, and Savvas of Kalymnos, to name but a few. The Ecumenical Patriarch Gregory V the Martyr and the company of glorious latter-day Athonite martyrs still teach more strikingly today after their martyr's end and strengthen the hearts of the people.

In our own century the Holy Mountain has continued its hidden service to mankind which makes known the lofty spirituality and life of Orthodoxy and its benign influence beyond its boundaries by continuing to produce ascetics and figures of great spiritual and theological stature. In a world which thirsts and seeks in anguish for authenticity, discipline and truth, it gives its testimony of the experience of the Orthodox spiritual life and the salvation of the soul. The many young pilgrims today may not always be fired with enthusiasm, but they are set thinking by this way of life of asceticism, abstinence, simplicity, and quiet of the monks. Thus often a pilgrimage to the Holy Mountain is a turning-point in their lives. The humility and sanctity of Mount Athos play a role of spiritually alerting the Church and the people."
(taken from: http://www.mountathos.gr/active.aspx?mode=en%7B00000000-0000-0000-0000-000000000004%7DView)

Note: I'm not sure if some of those in the above list are canonized yet (the ones I am sure of, I've mentioned as such). I also am not sure if the text has been officially approved for use in church or not, so consult the appropriate church leaders for a blessing first. May Christ have mercy on us and save us, through the prayers of our righteous and God-bearing Fathers! 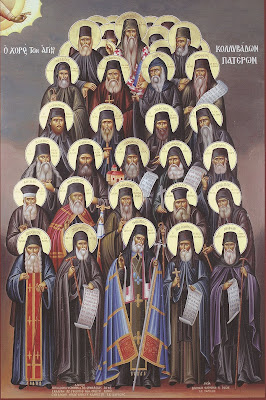 Icon of the Synaxis of the Holy Kollyvades Fathers (taken from: http://www.impantokratoros.gr/A815306D.el.aspx)


Christ is Risen from the dead, by death, trampling down upon death, and to those in the tombs, bestowing life!
Truly the Lord is risen!
Posted by Agioi_Anargyroi at 1:42 PM