"Holy Virgin Martyr Paraskeva of Rome was the only daughter of Christian parents, Agathon and Politia, and from her early years she dedicated herself to God. She spent much of her time in prayer and the study of the Holy Scriptures. After the death of her parents St Paraskeva distributed all of her inheritance to the poor, and consecrated her virginity to Christ. Emulating the holy Apostles, she began to preach to the pagans about Christ, converting many to Christianity. 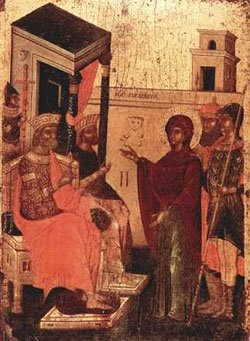 She was arrested during the reign of Antoninus Pius (138-161) because she refused to worship the idols. She was brought to trial and fearlessly confessed herself a Christian. Neither enticements of honors and material possessions, nor threats of torture and death shook the firmness of the saint nor turned her from Christ. She was given over to beastly tortures. They put a red-hot helmet on her head and threw her in a cauldron filled with boiling oil and pitch. By the power of God the holy martyr remained unharmed. When the emperor peered into the cauldron, St Paraskeva threw a drop of the hot liquid in his face, and he was burned. The emperor began to ask her for help, and the holy martyr healed him. After this the emperor set her free. 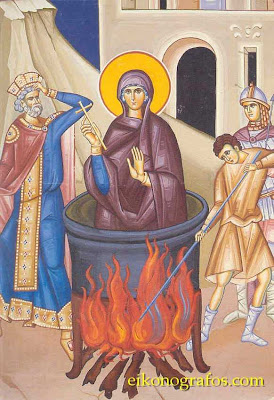 Icon of St. Paraskevi unharmed in the boiling cauldron (Icon courtesy of www.eikonografos.com used with permission) 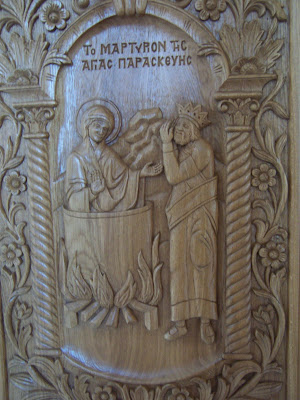 Engraving depicting the Martyrdom of St. Paraskevi, from the Monastery of the same name, Texas (http://3.bp.blogspot.com/_iTncioBQZNk/R_N_hnG_usI/AAAAAAAABJk/7w3_guJZ4zo/s1600-h/100_7509.jpg)
Traveling from one place to another to preach the Gospel, St Paraskeva arrived in a city where the governor was named Asclepius. Here again they tried the saint and sentenced her to death. They took her to an immense serpent living in a cave, so that it would devour her. But St Paraskeva made the Sign of the Cross over the snake and it died. Asclepius and the citizens witnessed this miracle and believed in Christ. She was set free, and continued her preaching. In a city where the governor was a certain Tarasius, St Paraskeva endured fierce tortures and was beheaded in the year 140. 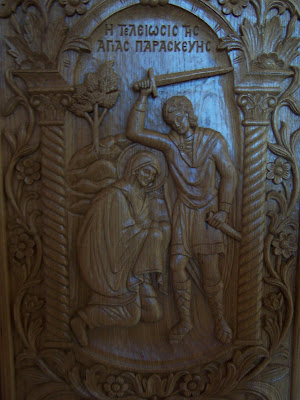 The beheading of St. Paraskevi from her Monastery in Texas (http://2.bp.blogspot.com/_iTncioBQZNk/SdyOZ0WAdwI/AAAAAAAACoo/r1IakhkOQgg/s1600-h/100_9087.jpg)

Many miracles took place at the saint's tomb: the blind received sight, the lame walked, and barren women gave birth to children. It is not only in the past that the saint performed her miracles, but even today she helps those who call on her in faith."
(taken from: http://ocafs.oca.org/FeastSaintsViewer.asp?SID=4&ID=1&FSID=102096) 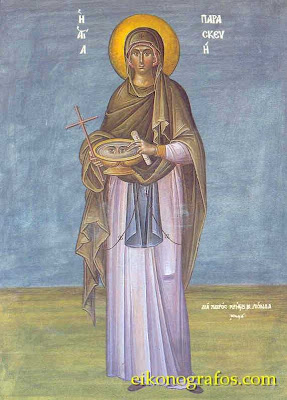 Icon of St. Paraskevi, holding a pair of eyes, as she is a great protector and healer of the eyes (Icon courtesy of http://www.eikonografos.com/ used with permission) 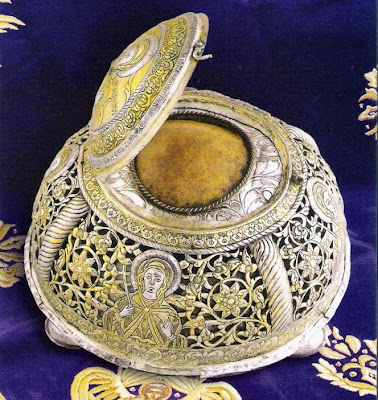 Finally, for those in the United States, the Shrine of St. Paraskevi in Greenlawn, New York, treasures relics of St. Paraskevi (along with those of St. Panteleimon the Great Martyr), along with a miraculous, healing spring of holy water from which many people have been healed. For more information, see: http://stparaskevi.org/shrine_stparaskevi.html.


May St. Paraskevi the Great Righteous Martyr intercede for us all and help us! 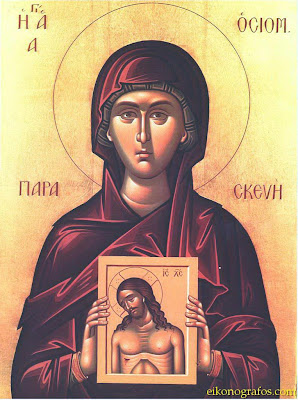 Icon of St. Paraskevi the Great Martyr. "Since she was born on a Friday (in Greek, Paraskevi), she was given this name, which means "preparation" or "preparedness" (compare Matt. 27:62, Mark 15:42, Luke 23:54, and John 19:31, where 'Friday' is called "the day of the preparation") (http://goarch.org/chapel/saints_view?contentid=496&type=saints)" The icon she holds is a representation of Christ and His passion, which occured on Friday, and which St. Paraskevi imitated in her life and martyrdom (Icon courtesy of www.eikonografos.com used with permission)

Apolytikion of St. Paraskevi the Great Martyr - 1st Tone
Your diligence corresponded to your name, Paraskevi, which denotes preparedness. Through faith you inherited the promised dwelling that was prepared for you, O prize-winning Martyr. Therefore you pour out cures and healings, and you intercede on behalf of our souls.

Kontakion - 4th Tone. You appeared today.
We have found your sacred shrine to be a clinic of the soul, O holy one, and all we faithful now accord honor to you with our voices strong, devout Martyr Paraskevi extolled by all.

Oikos
The voice of the Bridegroom called you as a bride, and gave you an incorruptible crown, O godly-minded and all glorious Paraskevi; and He enrolled you, as one worthy, together with the august martyrs and prizewinners. As you rejoice with them, remember us who observe your holy feast and who assemble in your church. For as we stand in it now, we soulfully offer up hymns to you, devout Martyr Paraskevi extolled by all.

Prosomoia of the Praises - 1st Tone. For the celestial orders.
Dancing in chorus in heaven and in the courts of the Lord * with those renowned wise virgins, O devout holy Martyr, * most wise Paraskevi, you were given the grace * from the Lord to cure illnesses, * and to expel the unclean spirits and to heal * those who come to you for this with faith.

You dashed the might of the godless impious kings to the ground, * and unto God, O Virgin, * you directed your footsteps. * Therefore you were not frightened by the lead * hammers pounding you, nor the fire, * nor by the scraping of your body, nor by the heat * of the cauldron, nor the death by sword.

Firstly you wore out your body with your ascetic feats, * fair Virgin, then you hardened * your resolve in the contest. * Thus, O holy glorious Martyr of Christ, * you became like a holy sword * wrought in the heavens, like gold smelted and refined * by the tortures you endured for God.
(hymns taken from: http://sgpm.goarch.org/ematins/bilingual/Jul26.pdf) 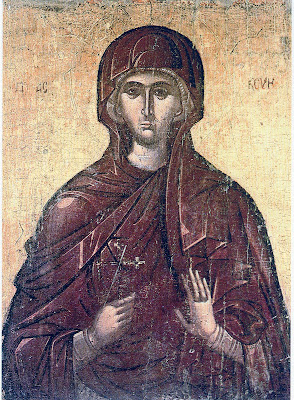 
Kontakion in the Plagal of the Fourth Tone
As the Lord’s grace-flowing nun, and His fervent apostle and Martyr, we praise you with triumphant hymns, and we praise your memory most tunefully, sprinkling flowers and crying:
Hail, Paraskevi, O comely virgin.

Hymns I offer to you the beauty of virgins, O chaste Paraskevi, martyr of Christ (3). For you struggled boldly, and you enlighten and shine with the rays of wonders on those who hymn you, and we offer you hymns with fervor:
Hail, child of pious faithful,
Hail, dear throne of God.
Hail, beautiful-voiced trumpet of love,
Hail, pure servant of the Virgin.
Hail, for from above you cover the Orthodox from blows,
Hail, you who cease the tears and groans from mortals.
Hail, for you are the protection of eyes,
Hail, for you rejoiced in the monastic path.
Hail, for you deposed the boasting of the enemy,
Hail, you who were victorious through Christ’s power.
Hail, divine adornment of Rome,
Hail, speedy healer of wounds.
Hail, Paraskevi, O comely virgin.


For the full akathist to St. Paraskevi in English (amateur translation), see: http://full-of-grace-and-truth.blogspot.com/2012/01/akathist-to-st-paraskevi-great-martyr.html. 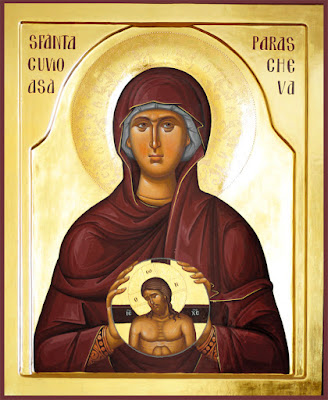 St. Paraskevi the Great Martyr (source)
Through the prayers of our Holy Fathers, Lord Jesus Christ our God, have mercy on us and save us! Amen!
Posted by Agioi_Anargyroi at 10:07 AM

Could you, please, email me the full amateur translation in English of the akathist of Saint Martyr Paraskevi of Rome? I would appreciate it very much! My email is my double my nickname, no punctuation between the two words, at gmail.com.

See the following post for the Akathist of St. Paraskevi in English (amateur translation): http://full-of-grace-and-truth.blogspot.com/2012/01/akathist-to-st-paraskevi-great-martyr.html.

Do you know where I could find St Paraskevi's Suplicatory Canon in English?

Nice blogpost - what is the source for the image of St. Paraskevi taming the dragon? Seems to be a fresco, but where? Thanks in advance, Alex