The Holy Apostle Ananias of the Seventy

The Holy Apostle Ananias of the Seventy - Commemorated on October 1 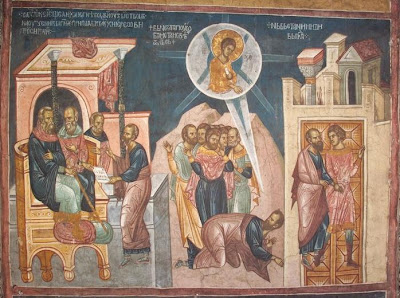 Fresco from Decani Monastery depicting St. Paul (then Saul) and the high priests, Christ appearing to Saul, and proceding to Damascus blind (taken and altered from: http://www.srpskoblago.org/Archives/Decani/exhibits/Collections/ActsApostles/CX4K1117_l.html)

"The Holy Apostle Ananias of the Seventy (October 1), was the first Bishop of Damascus. The Lord ordered him to restore the sight of Saul, the former persecutor of Christians, then baptize him (Acts 9:10-19, 22:12). Saul became the great preacher and Apostle Paul. St Ananias boldly and openly confessed Christianity before the Jews and the pagans, despite the danger. 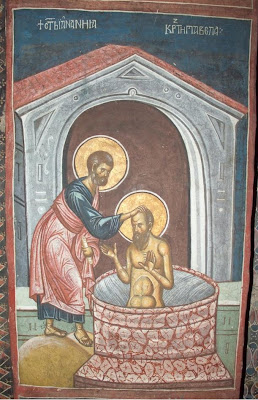 From Damascus he went to preach at Eleutheropolis, where he healed many of their infirmities. Lucian, the prefect of the city, tried to persuade the holy one to offer sacrifice to idols. Because of Ananias' staunch and solid confession of Christ, Lucian ordered that he be tortured. Harsh torments did not sway the witness of Truth. Then the torturers led him out beyond the city, where they stoned him. The saint prayed for those who put him to death. His relics were later transferred to Constantinople." (taken from: http://ocafs.oca.org/FeastSaintsViewer.asp?SID=4&ID=1&FSID=102825) 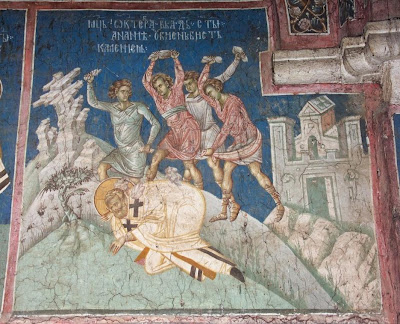 Fresco from Decani Monastery depicting the Martyrdom of St. Ananias the Apostle (taken and altered from: http://www.srpskoblago.org/Archives/Decani/exhibits/Menologion/October/CX4K3431_l.html) 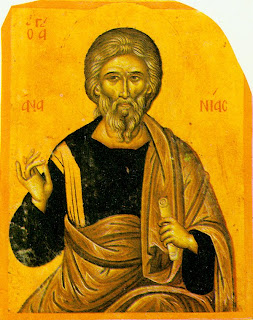 Icon of the Holy Apostle Ananias of the Seventy (taken from: http://ocafs.oca.org/FeastSaintsViewer.asp?SID=4&ID=1&FSID=102825)
Apolytikion in the Third Tone
O Holy Apostle Ananias, intercede with the merciful God that He grant unto our souls forgiveness of offences.
Kontakion in the Second Tone
Our most fervent advocate in intercession who dost hearken most quickly to them that pray to thee, receive our supplication, O Ananias, and implore Christ, Who alone is glorified in the Saints, to have mercy on us.
(taken from: http://goarch.org/chapel/saints_view?contentid=224)
Through the prayers of our Holy Fathers, Lord Jesus Christ our God, have mercy on us and save us! Amen!
Posted by Agioi_Anargyroi at 6:02 AM

Labels: Lives of the Saints, The Holy Apostles