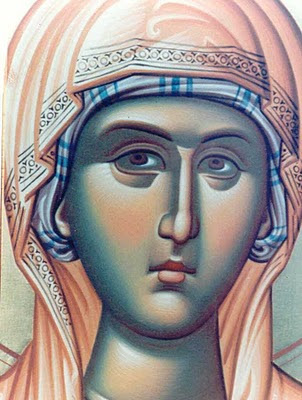 St. Mary Magdalene the Myrrh-bearer and Equal-to-the-Apostles - Commemorated on July 22, and with the Holy Myrrhbearers on the Second Sunday after Pascha (http://4.bp.blogspot.com/_yTJfgv3QlAk/TItpl3hPGMI/AAAAAAAAJ_c/DvUWF3YXWHc/s400/ΑΓΙΑ+ΜΑΡΙΑ+ΜΑΓΔΑΛΗΝΗ+-+ST.+MARIA+MAGDALINI.jpg)

Mary Magdalene was one of the myrrh-bearing women and "equal to the apostles". She was born in the town of Magdala along the shore of Lake Gennesaret and was from the tribe of Issachar. She was tormented by seven evil spirits from which the Lord Jesus freed her and made her whole. (***See note below) She was a faithful follower and servant of the Lord during His earthly life. Mary Magdalene stood beneath the Cross on Golgotha and grieved bitterly and mourned with the All-Holy Birth-giver of God. After the death of the Lord she visited His sepulchre three times. When the Lord resurrected she saw Him on two occasions: once alone and the other time with the other myrrh-bearing women. 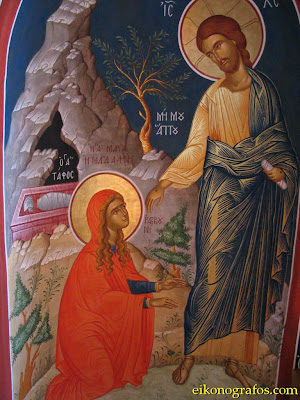 The Resurrected Christ appearing to St. Mary Magdalene, telling her: "Do not touch me" (Icon courtesy of www.eikonografos.com used with permission)

[While it was still dark, Mary Magdalene came to the sepulchre (tomb) carrying the ointments. (For this reason the Church calls her "Myrrh-bearer".) Coming close she saw that the large stone that had been placed at the entrance of the tomb had been rolled away. She thought that perhaps someone had already come and taken the Body to another place. Hurrying back to Jerusalem she told the apostles Peter and John: "They have taken away the Lord out of the sepulchre, 'and we know not where they have laid Him." Together with them she went again to the tomb and stood there weeping. When they had left she stooped down and looked into the sepulchre. There she saw two angels who asked why she was crying. She told them and then,. turning around, she saw Jesus, but in her grief she did not recognize Him, and thinking -He was the gardener, told Him also the reason for her weeping. It was only Then He said her name: "Mary!" that she recognized Him as her beloved Lord. Not believing her own ears, she cried out with joy, [Rabboni] "Master! Then quickly following his His instructions, she ran quickly to announce the good news to the disciples: “Christ is risen!” (Because she was the first, sent by the Lord Himself, to proclaim the Resurrection, the Church also calls her "Equal-to-the--Apostles"). (http://www.roca.org/OA/9/9k.htm)] 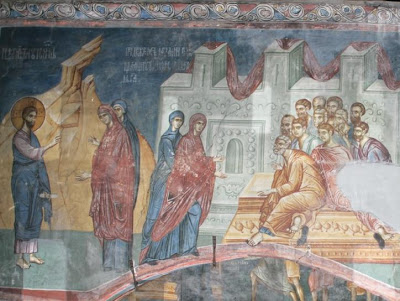 Christ appearing to the Myrrhbearers after His Resurrection, and their announcing the Resurrection to the Apostles (http://www.srpskoblago.org/Archives/Pec/exhibits/ChurchoftheVirginHodegetria/Nave/WestArmoftheCross/NorthWall/282N2402_l.html)

She traveled to Rome and appeared before Tiberias Caesar and presenting him with a red colored egg, greeted him with the words: "Christ is Risen!" At the same time, she accused Pilate before Caesar for his unjust condemnation of the Lord Jesus. Caesar accepted her accusation and transferred Pilate from Jerusalem to Gaul where, this unjust judge, in disfavor with the emperor, died of a dread disease. After that, Mary Magdalene returned from Rome [and having passed through all of Italy and France, along with Egypt, Phoenicia, Syria and Pamphylia preaching Christ, she returned to Jerusalem, where she stayed for a period of time with the Theotokos. (http://www.impantokratoros.gr/C92EE7A9.el.aspx) She returned] to Ephesus to St. John the Theologian whom she assisted in the work of preaching the Gospel. With great love toward the resurrected Lord, and with great zeal, she proclaimed the Holy Gospel to the world as a true apostle of Christ. She died peacefully in Ephesus and, according to tradition, was buried in the same cave in which seven youths were miraculously put to sleep for hundreds of years and, after that, were brought to life and then died (August 4). The relics of St. Mary Magdalene were later transferred to Constantinople. There is a Russian Orthodox convent dedicated to St. Mary Magdalene near the Garden of Gethsemane.
(http://www.westsrbdio.org/prolog/my.html?month=July&day=22&Go.x=8&Go.y=19) 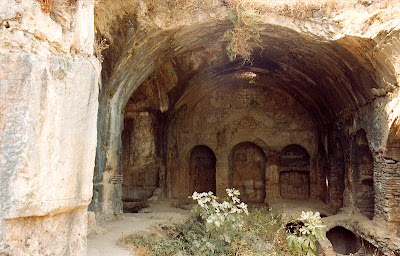 Modern picture of the Cave of the Seven Youths of Ephesus, where St. Mary Magdalene was buried after her repose (http://4.bp.blogspot.com/-B3C9RC_M-xQ/TghFARsVfLI/AAAAAAAAADU/PpAAMxokP6U/s1600/Siebenschl%25C3%25A4ferKircheEphesus.jpg)

***Note: "Although it is sometimes said that Saint Mary Magdalene was the "sinful woman" of the Gospel, this is nowhere stated in the tradition of the Church, in the sacred hymnology, or in the Holy Gospels themselves, which say only that our Lord cast seven demons out of her [Mark 16:9, Luke 8:2], not that she was a fallen woman." (http://www.goarch.org/chapel/saints_view?contentid=136). See the following site for a full discussion of this issue, along with a fuller life of the Saint (in Greek): http://www.impantokratoros.gr/C92EE7A9.el.aspx. 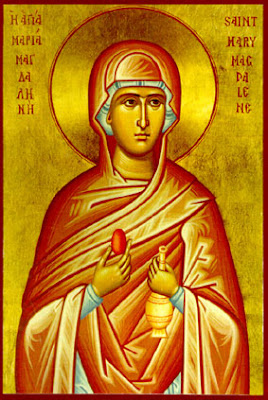 
HYMN OF PRAISE
SAINT MARY MAGDALENE
by St. Nikolai Velimirovitch
Magdalene, in dark sorrow wrapped herself
Because of the bloody death of the Son of God.
Sorrow is to love, the most bitter sorrow,
It, in the world, has no comfort or companion,
To it, tears are comfort and pain its only companion,
To Saint Magdalene, in darkness the world became wrapped.
The weak creation of man, asked for light,
Without hope, in the dark Mary groped.
His tomb to her is light but behold, the tomb is empty!
Stolen she thought, naked and not anointed!
Bitterly she wept, to weeping never any end,
At that moment, a man's voice beside her, she heard:
Woman, why are you weeping, tell me:
Whom do you seek?Whom do I seek, you ask?
To comfort me, do you wish!
But, if you took Him away, where did you place Him?
Tearful and melancholy, Jesus looked at her,
And with a sweet voice called her: Mary!
In Mary's heart, a light began to shine
O familiar voice, with sweetness unsurpassable,
The voice overly generous by life and power!
With that voice, the Lord healed the sick,
With that same voice, He resurrected the dead.
Life-creating voice, a miraculous voice!
Mary recoiled and turned around
Rabbi, she cried out at that moment the sun came out
A New Day dawned to Mary and to the world.
(http://www.westsrbdio.org/prolog/my.html?month=July&day=22&Go.x=8&Go.y=19) 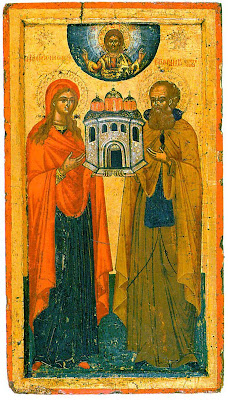 Sts. Mary Magdalene and Simon the Myrrh-streamer. Because her sacred and wonderworking hand is treasured by the Monastery of Simonopetra, and because of her countless miracles, she is considered to be a "founder" of Simonopetra, along with St. Simon. (http://3.bp.blogspot.com/_UOJjUH2o_wM/S46_M1lvE0I/AAAAAAAADVg/cEGfpDFydPM/s1600-h/Sts.+Simon+and+Mary+Magdalene.bmp) 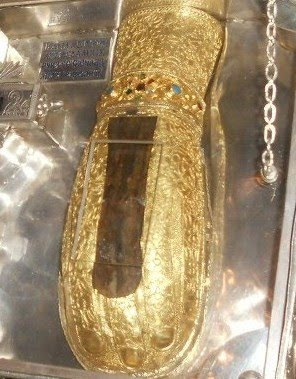 The holy, incorrupt (after roughly 2000 years) and miraculous Right Hand of St. Mary Magdalene, treasured by the Monastery of Simonopetra, Mount Athos (http://4.bp.blogspot.com/_wVvxBi28a8Q/TEVtotlqTRI/AAAAAAAAbwM/bs6FOIuGWwQ/s1600/DSCN3774b.jpg) 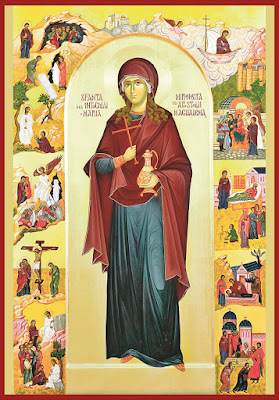 St. Mary Magdalene, with scenes from her life (source)
Troparion (Tone 1)
In keeping His commandments and laws, O holy Mary Magdalene, you followed Christ, who for our sake was born of a virgin, and in celebrating your most holy memory today, we receive forgiveness of sins by your prayers!

Kontakion (Tone 4)
When God, who is transcendent in essence, came with flesh into the world, O Myrrhbearer, He received you as a true disciple, for you turned all your love toward Him; henceforth you would yourself work many healings. Now that you have passed into heaven, never cease to intercede for the world! (http://orthodoxwiki.org/Mary_Magdalene) 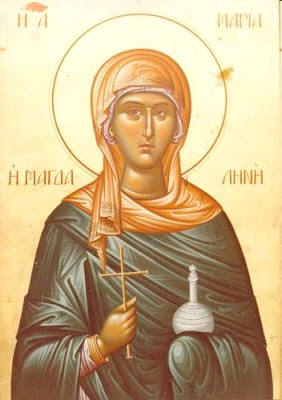 
Through the prayers of our Holy Fathers, Lord Jesus Christ our God, have mercy on us and save us! Amen!
Posted by Agioi_Anargyroi at 10:49 AM