St. Markella of Chios, the Much-suffering and Glorious Virgin Martyr 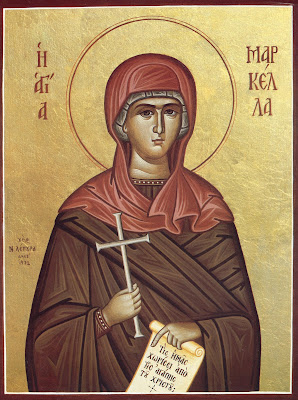 St. Markella lived in the village of Volissos, Chios in the middle of the fourteenth century. Her parents were Christians, and among the wealthiest citizens of Volissos. Her mother died when she was young, and so her father, the mayor of the village, saw to her education.

St. Markella had been trained by her mother to be respectful and devout, and to guard her purity. She avoided associations with other girls who were more outgoing than she was so that she would not come to spiritual harm through such company. Her goal was to attain the Kingdom of Heaven, and to become a bride of Christ.

St. Markella increased in virtue as she grew older, fasting, praying, and attending church services. She tried to keep the commandments and to lead others to God. She loved and respected her father, and comforted him in his grief over her mother’s death. She told him she would take care of him in his old age and would not abandon him. 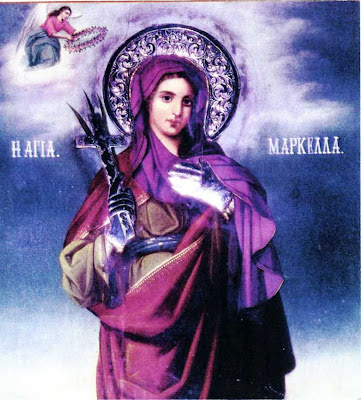 As an adult, St. Markella was loved by everyone for her beauty and for her spiritual gifts. The devil tried to lure her into sin by placing evil thoughts in her mind. However, St. Markella resisted these temptations and so the devil turned away from a direct confrontation with her. Instead, he incited her father with an unnatural desire for his daughter.

Eventually, Markella’s father changed in his behavior toward his child. He became moody and depressed, forbidding her to go into the garden or to speak with the neighbors. Unable to understand the reason for this change, she went to her room and wept. She prayed before an icon of the Mother of God, asking Her to help him. Soon she fell asleep, only to be awakened by her father’s shouting. 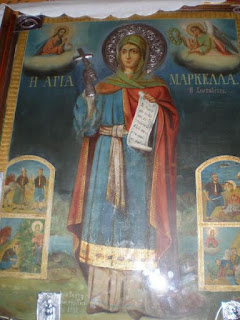 The unfortunate man had spent a long time struggling against his lust, but finally gave into it. At times he would speak to his daughter roughly, then later he would appear to be gentle. He wanted to be near her, and to stroke her hair. Unaware of her father’s intentions, St Markella was happy to see him emerge from his melancholy state, thinking that her prayers had been answered.

One day, her father openly declared the nature of his feelings for her. Horrified, Markella tried to avoid him as much as she could. Even the neighbors realized that there was something wrong, so they stopped speaking to him.

One day, a shepherd was tending his sheep near the beach, and led them into the shade of a tree to avoid the hot July sun. Just as he was about to lie down, he heard a noise and looked up. He saw a young woman with a torn dress running down the hill. She hid in a nearby bush, ignoring its thorns.
The shepherd wondered who was chasing her, and how she had come to this spot. He then heard the sound of a horse approaching, and recognized the mayor of the village. He asked the shepherd if he had seen his daughter., Markella. The shepherd said that he had not seen her, but pointed to her hiding place with his finger.

The mayor ordered Markella to come out of the bush, but she refused. He then set fire to the bush in order to force her out. She emerged and ran toward the rocky shore, calling out to the Mother of God for help.

Markella continued to run, even though blood was flowing from her face and hands. Feeling a sharp pain in her leg, she saw that she had been shot with an arrow. She paused to pull it out, then began to run once more. She scrambled over the rocks, staining them with her blood. Hearing her father getting closer, she prayed that the earth would open up and swallow her.

Markella sank to her knees, her strength all gone. Then a miracle took place. The rock split open and received her body up to the waist. Her father drew near with wild-eyed joy shouting, “I have caught you. Now where will you go?” 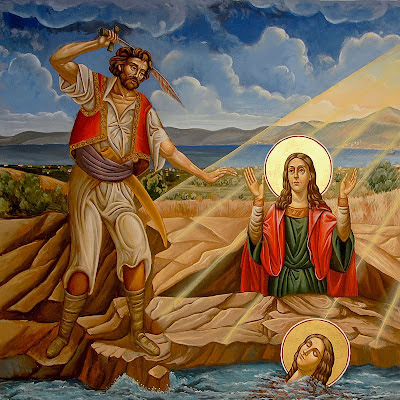 St. Markella being beheaded by her twisted father (source)

Drawing his sword, he began to butcher his helpless daughter, cutting off pieces of her body. Finally, he seized her by the hair and cut off her head, throwing it into the sea. The calm sea suddenly became stormy, and large waves crashed to the shore near her father’s feet. Thinking that the sea was going to drown him because of his crime, he turned and fled. His ultimate fate has not been recorded. The Cross placed where St. Markella was martyred (http://www.digital-camera.gr/index.php?option=photos&action=view&photo_id=3262)

Later, pious Christians built a church on the spot where St. Markella hid in the bush. The spot where she was killed became known as “The Martyrdom of St. Markella,” and the rock that opened to receive her is still there. The rock appears to be a large stone that broke off from a mountain and rolled into the sea. Soil from the mountain covers the spot on the side facing the land. On the side facing the ocean is a small hole, about the size of a finger. Healing water flows from the opening, which cures every illness of the faithful. The flow of water is not due to the movements of the tide, because when the tide is out, there would be no water. This, however, is not the case. The water is clear, but some of the nearby rocks have been stained with a reddish-yellow color. According to tradition, the lower extremities of St. Markella’s body are still concealed in the rock.

The most astonishing thing about the rock is not the warmth of the water, nor the discoloration of the other rocks, but what happens when a priest performs the Blessing of Water. Steam rises up from the water near the rock, and the entire area is covered with a mist. The sea returns to normal as soon as the service is over. Many miracles have occurred at the spot, and pilgrims flock there from all over the world.
(http://www.antiochian.org/node/19007) 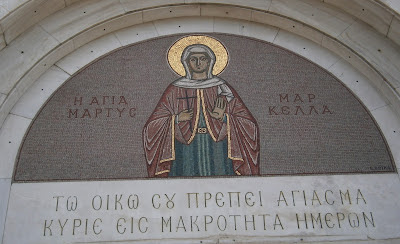 
Apolytikion in the First Tone.
Submitting to the laws of the Lord's divine teachings, you strove to keep them blamelessly, O Martyr Markella. And fearing the violence of your father, you fled from him and dwelt in the mountains. Pursuing you he found you and slew you, O undefiled bride of Christ. Glory to Him who strengthened you. Glory to Him who crowned you. Glory to Him who works healings for all through you.
(http://goarch.org/chapel/saints_view?contentid=494)

For the Paraklesis to St. Markella of Chios, see: http://full-of-grace-and-truth.blogspot.com/2012/07/paraklesis-to-st-markella-of-chios.html.
Through the prayers of our Holy Fathers, Lord Jesus Christ our God, have mercy on us and save us! Amen!
Posted by Agioi_Anargyroi at 4:38 AM

Labels: Lives of the Saints, St. Markella of Chios