The wondrous icon of the Theotokos "Axion Estin" 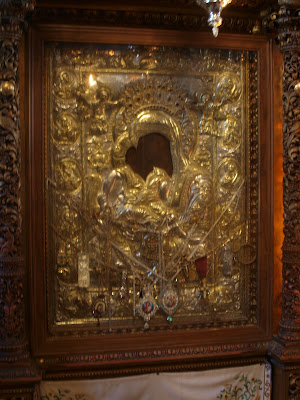 The "It is Truly Meet" Icon of the Mother of God is in [veneration stand] of the cathedral church of the Karyes monastery on Mount Athos.

One Saturday night [in the 10th century] an Elder went to Karyes for the all-night Vigil. He left, instructing his disciple to remain behind and read the service in their cell. As it grew dark, the disciple heard a knock on the door. When he opened the door, he saw an unknown monk who called himself Gabriel, and he invited him to come in. They stood before the icon of the Mother of God and read the service together with reverence and compunction.

During the Ninth Ode of the Canon, the disciple began to sing "My soul magnifies the Lord…" with the Irmos of St Cosmas the Hymnographer (October 14), "More honorable than the Cherubim…."

The stranger sang the next verse, "For He has regarded the low estate of His handmaiden…." Then he chanted something the disciple had never heard before, "It is truly meet to bless Thee, O Theotokos, ever-blessed and most pure, and the Mother of our God…" Then he continued with, "More honorable than the Cherubim.…" 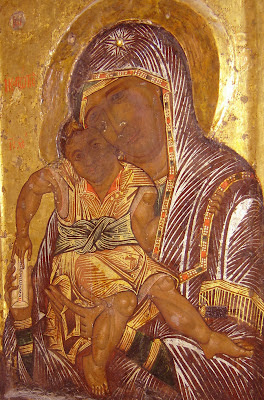 The "Axion Estin" icon of the Theotokos, photographed without its riza covering (source)

While the hymn was being sung, the icon of the Theotokos shone with a heavenly light. The disciple was moved by the new version of the familiar hymn, and asked his guest to write the words down for him. When the stranger asked for paper and ink, the disciple said that they did not have any.

The stranger took a roof tile and wrote the words of the hymn on its surface with his finger. The disciple knew then that this was no ordinary monk, but the Archangel Gabriel. The angel said, "Sing in this manner, and all the Orthodox as well." Then he disappeared, and the icon of the Mother of God continued to radiate light for some time afterward. 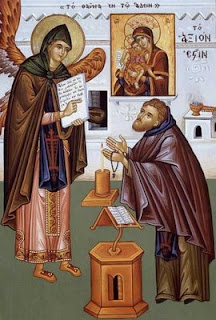 The Holy Archangel Gabriel appearing to the monk and revealing the hymn: "Axion Estin" (source)

The Eleousa Icon of the Mother of God, before which the hymn "It Is Truly Meet" was first sung, was transferred to the katholikon at Karyes. The tile, with the hymn written on it by the Archangel Gabriel, was taken to Constantinople when St Nicholas Chrysoberges (December 16) was Patriarch.

For info on the litany of the "Axion Estin" icon following Pascha, see: http://full-of-grace-and-truth.blogspot.com/2010/04/litany-of-icon-of-axion-estin.html. 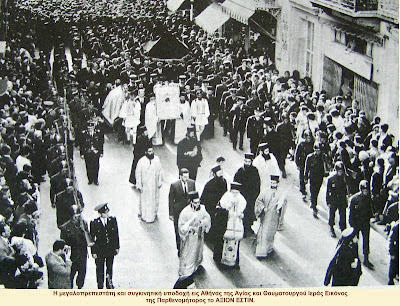 The magnificent reception of the Holy and Wonderworking icon of the Theotokos "Axion Estin" in the city of Athens in 1963 to celebrate the millenial celebration of the Monasteries of Mount Athos. This was the first time that this holy icon had ever left the Holy Mountain (http://2.bp.blogspot.com/-ej5T3XcYJX8/T1SFTROlBZI/AAAAAAAAIQo/QGO8CMnMPZw/s1600/271579-17.jpg)

The "Axion Estin" icon of the Theotokos in the city of Thessaloniki 2012
On October 13th begins the religious observances for the feast of the Patron Saint of our Thessaloniki, St. Demetrios the Myrrhstreamer, and also the completion of 100 years from the city's liberation.

At 4:30 on the evening of Saturday October 13th, at the area of the White Tower [Leukou Pyrgou], there will take place the reception of the holy "Axion Estin" icon of the Theotokos, which will be brought by the Holy Community of the Holy Mountain by a military boat. The wonderworking icon will be received by the Archbishop of Athens and all Greece Ieronymos, the Metropolitan of Thessaloniki Anthimos, the Clerics, the local government, and the pious people. The "Axion Estin" will be brought in procession to the Holy Church of the Patron St. Demetrios, where there will take place a doxology and Great Vespers with many hierarchs.

All are invited to partake in this meaningful event for our local Church.
(http://www.imth.gr/inst/imth/gallery/nea,anakoinoseis/2012.09.28-deltio-typou-eorton.pdf)

The icon most likely will remain in the church of St. Demetrios throughout the feasts of St. Demetrios (http://full-of-grace-and-truth.blogspot.com/2011/10/holy-week-services-of-st-demetrios.html, http://full-of-grace-and-truth.blogspot.com/2008/10/veneration-of-st-demetrios.html), and will daily be available for veneration by the faithful, together with the Holy and Myrrhstreaming Relics of St. Demetrios, the Great Martyr. I thought to share this info with the Orthodox world, especially as it is rare that this wonderworking icon of the Theotokos ever leaves Mount Athos, and as such, this is an great opportunity for women and children to receive such a blessing from Panagia. May all those who can, take advantage of such an incredible gift! 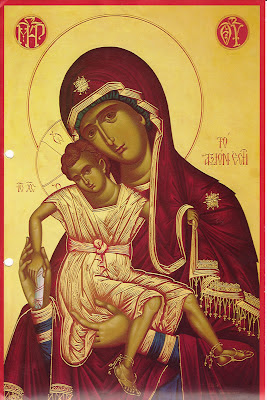 Modern rendition of the "Axion Estin" icon of the Theotokos (source)

It is truly meet to bless thee, O Theotokos, ever blessed, and most pure, and the Mother of our God. More honorable than the cherubim, and beyond compare more glorious than the seraphim. Without corruption thou gavest birth to God the Word. The true Theotokos, we magnify thee.

Apolytikion in the Fourth ToneYe hosts of the Fathers of Mount Athos, gather today, and shout with a voice of jubilation, leaping for joy, and faithfully keeping feast: For, behold, the praise of the most pure Theotokos wondrously and awesomely is sung by the Angel; and therefore, as the Mother of God, we glorify her name.

Kontakion in the Fourth ToneAll of Athos keepeth feast this day in gladness; for it wondrously received from an Archangel's holy hand the hymn whereby thou hast ever been praised as the Mother of God, as is truly meet.
(http://www.johnsanidopoulos.com/2009/06/miracles-of-icon-of-axion-estin.html) 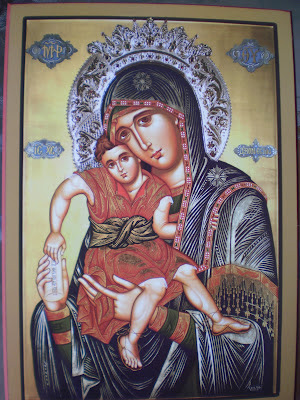 Modern rendition of the "Axion Estin" icon of the Theotokos (source)


Most-holy Theotokos, save us!
Through the prayers of our Holy Fathers, Lord Jesus Christ our God, have mercy on us and save us! Amen!
Posted by Agioi_Anargyroi at 2:16 AM