St. Nina (Nino) the Equal-to-the-Apostles, and Enlightener of Georgia 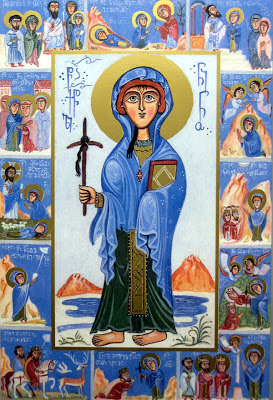 St. Nina (Nino) the Equal-to-the-Apostles, and Enlightener of Georgia - Commemorated on January 14 (source)

The virgin Nino of Cappadocia was a relative of Great-martyr George and the only daughter of a widely respected and honorable couple. Her father was a Roman army chief by the name of Zabulon, and her mother, Sosana, was the sister of Patriarch Juvenal of Jerusalem. When Nino reached the age of twelve, her parents sold all their possessions and moved to Jerusalem. Soon after, Nino’s father was tonsured a monk. He bid farewell to his family and went to labor in the wilderness of the Jordan. 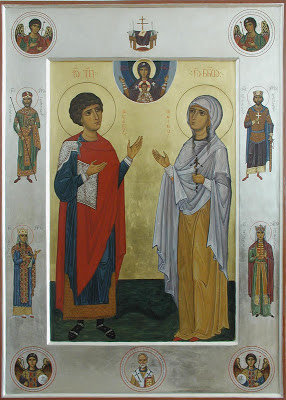 After Sosana had been separated from her husband, Patriarch Juvenal ordained her a deaconess. She left her daughter Nino in the care of an old woman, Sara Niaphor, who raised her in the Christian Faith and related to her the stories of Christ’s life and His suffering on earth. It was from Sara that Nino learned how Christ’s Robe had arrived in Georgia, a country of pagans. 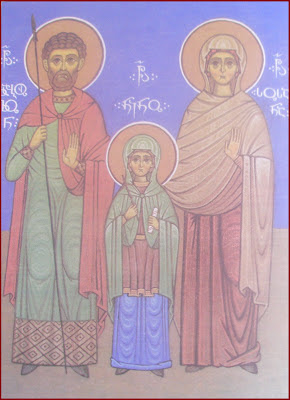 St. Nina of Georgia and her holy parents (source)

Soon Nino began to pray fervently to the Theotokos, asking for her blessing to travel to Georgia and be made worthy to venerate the Sacred Robe that she had woven for her beloved Son. The Most Holy Virgin heard her prayers and appeared to Nino in a dream, saying, “Go to the country that was assigned to me by lot and preach the Gospel of our Lord Jesus Christ. He will send down His grace upon you and I will be your protector.” 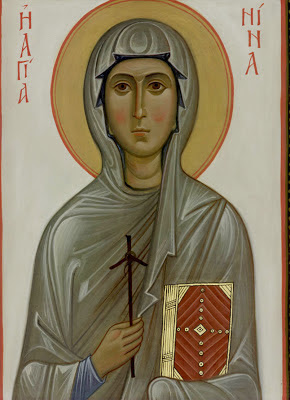 But the blessed Nino was overwhelmed at the thought of such a great responsibility and answered, “How can I, a fragile woman, perform such a momentous task, and how can I believe that this vision is real?” In response, the Most Holy Theotokos presented her with a cross of grapevines and proclaimed, “Receive this cross as a shield against visible and invisible enemies!” 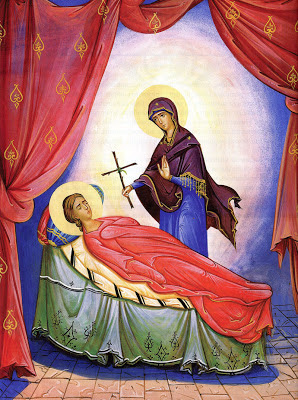 The Theotokos appearing to St. Nina and giving her the Holy Cross (source) 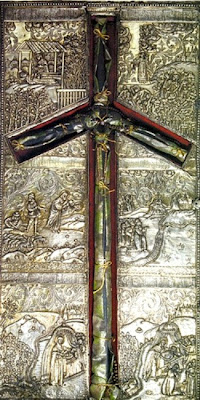 The Holy Cross of St. Nina of Georgia (source)

Nino related the vision to her uncle, Patriarch Juvenal, and revealed to him her desire to preach the Gospel in Georgia. Juvenal led her in front of the Royal Doors, laid his hands on her, and prayed, “O Lord, God of Eternity, I beseech Thee on behalf of my orphaned niece: Grant that, according to Thy will, she may go to preach and proclaim Thy Holy Resurrection. O Christ God, be Thou to her a guide, a refuge, and a spiritual father. And as Thou didst enlighten the Apostles and all those who feared Thy name, do Thou also enlighten her with the wisdom to proclaim Thy glad tidings.”

When Nino arrived in Rome, she met and baptized the princess Rhipsimia and her nurse, Gaiana. At that time the Roman emperor was Diocletian, a ruler infamous for persecuting Christians. Diocletian (284–305) fell in love with Rhipsimia and resolved to marry her, but St. Nino, Rhipsimia, Gaiana, and fifty other virgins escaped to Armenia. The furious Diocletian ordered his soldiers to follow them and sent a messenger to Tiridates, the Armenian king (286–344), to put him on guard.

King Tiridates located the women and, following Diocletian’s example, was charmed by Rhipsimia’s beauty and resolved to marry her. But St. Rhipsimia would not consent to wed him, and in his rage the king had her tortured to death with Gaiana and the fifty other virgins. St. Nino, however, was being prepared for a different, greater task, and she succeeded in escaping King Tiridates’ persecutions by hiding among some rose bushes. 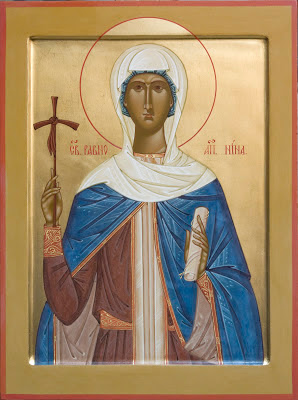 When she finally arrived in Georgia, St. Nino was greeted by a group of Mtskhetan shepherds near Lake Paravani, and she received a blessing from God to preach to the pagans of this region.

With the help of her acquaintances St. Nino soon reached the city of Urbnisi. She remained there a month, then traveled to Mtskheta with a group of Georgians who were making a pilgrimage to venerate the pagan idol Armazi. There she watched with great sadness as the Georgian people trembled before the idols. She was exceedingly sorrowful and prayed to the Lord, “O Lord, send down Thy mercy upon this nation …that all nations may glorify Thee alone, the One True God, through Thy Son, Jesus Christ.” 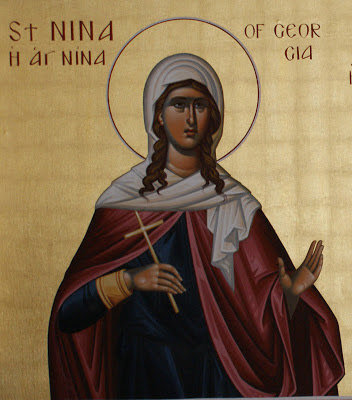 Suddenly a violent wind began to blow and hail fell from the sky, shattering the pagan statues. The terrified worshipers fled, scattering across the city.

St. Nino made her home beneath a bramble bush in the garden of the king, with the family of the royal gardener. The gardener and his wife were childless, but through St. Nino’s prayers God granted them a child. The couple rejoiced exceedingly, declared Christ to be the True God, and became disciples of St. Nino. Wherever St. Nino went, those who heard her preach converted to the Christian Faith in great numbers. St. Nino even healed the terminally ill Queen Nana after she declared Christ to be the True God. 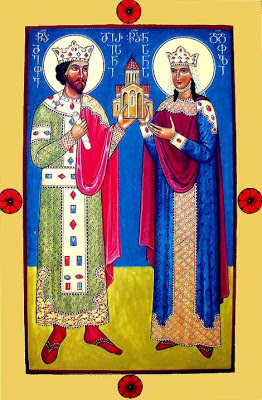 King Mirian, a pagan, was not at all pleased with the great impression St. Nino’s preaching had made on the Georgian nation. One day while he was out hunting, he resolved to kill all those who followed Christ.

According to his wicked scheme, even his wife, Queen Nana, would face death for failing to renounce the Christian Faith. But in the midst of the hunt, it suddenly became very dark. All alone, King Mirian became greatly afraid and prayed in vain for the help of the pagan gods. When his prayers went unanswered, he finally lost hope and, miraculously, he turned to Christ: “God of Nino, illumine this night for me and guide my footsteps, and I will declare Thy Holy Name. I will erect a cross and venerate it and I will construct for Thee a temple. I vow to be obedient to Nino and to the Faith of the Roman people!” 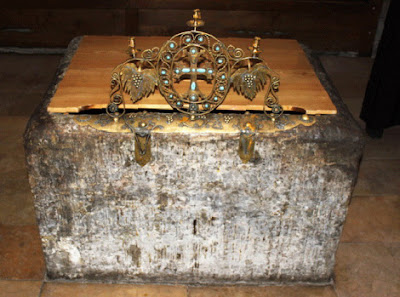 The well in which were baptized Sts. Mirian and Nana (source)

Suddenly the night was transfigured, the sun shone radiantly, and King Mirian gave great thanks to the Creator. When he returned to the city, he immediately informed St. Nino of his decision. As a result of the unceasing labors of Equal-to-the-Apostles Nino, Georgia was established as a nation solidly rooted in the Christian Faith. 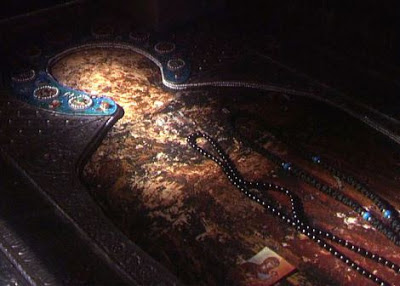 The tomb of St. Nina of Georgia (source)

St. Nino reposed in the village of Bodbe in eastern Georgia and, according to her will, she was buried in the place where she took her last breath. King Mirian later erected a church in honor of St. George over her grave. 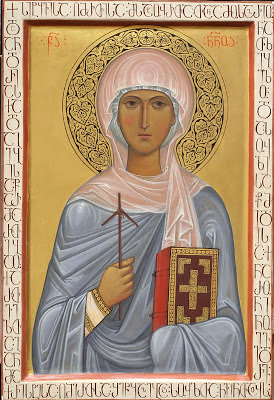 Troparion (Tone 4)
O handmaid of the Word of God, who in preaching hast equaled the first-called Apostle Andrew, and hast emulated the other Apostles; O enlightener of Iberia and reed-pipe of the Holy Spirit, Holy Nino, equal to the Apostles: Pray to Christ God to save our souls
(http://www.antiochian.org/node/17330)

Through the prayers of our Holy Fathers, Lord Jesus Christ our God, have mercy on us and save us! Amen!
Posted by Agioi_Anargyroi at 5:06 AM

Labels: Georgia, Lives of the Saints

Thank you for this website and for the page to St Nino of Georgia. She is our patron saint at First Things Foundation. A tiny piece of her hagriagraphy is on our home page website. She is a great blessing. Your page is too.