Homily on Meatfare Sunday, by St. Luke of Simferopol The Second Coming of Christ (source)

Note: I post this beautiful and moving amateur translation of a homily by St. Luke of Simferopol, for several reasons. First, that we might all come to our senses and repent while the Lord still calls us, especially during this "acceptable time" that is Great Lent. Second, that we might honor a great hierarch, confessor and wonderworker of Christ, whose Holy Relics where uncovered on March 17th. And finally, that we might also seek his intercessions to heal the pains, violence and divisions of the people of Ukraine. May St. Luke protect and defend those in all kinds of dangers, and may he grant all of us healing of our bodily or spiritual illnesses. 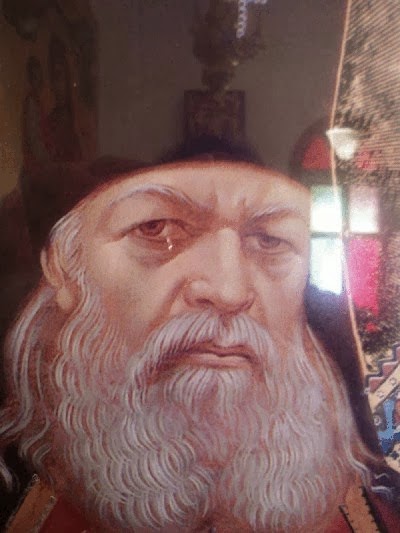 Icon of St. Luke of Simferopol in the Monastery of St. Ephraim the Syrian, Karterini (Greece), which shed a tear earlier this month before a group of Romanian pilgrims (source)
Through the prayers of our Holy Fathers, Lord Jesus Christ our God, have mercy on us and save us! Amen!
Posted by Agioi_Anargyroi at 3:25 PM

Lots about the fascists' crimes,
but not a word about Stalin's.

I don't know what was going through St. Luke's head at that point, but this was written in 1946, so it could be that he was unaware of some of Stalin's crimes that came to light later.

But let it never be said that St. Luke blindly defended the atheistic, communist government. He suffered torture and exile for 11 years in total at their hands.