The relationship between Sts. Paisios the Athonite and Iakovos Tsalikis 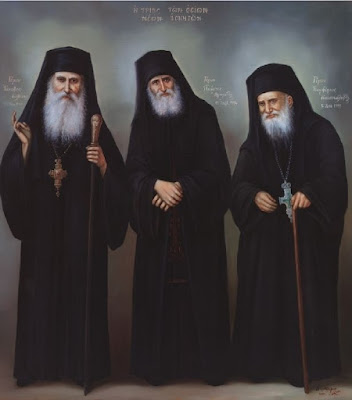 Three great Saints of 20th century Greece: St. Iakovos Tsalikis, St. Paisios the Athonite and St. Porphyrios of Kavsokalyvia. All three had great love and honor for each other, and have helped many thousands throughout the world through their example, their teachings and their prayers. (source)
Witness of hieromonk Iakovos: "I was a layman, a student of the Ecclesiastical high school of Lamia, in 1986, with the name John. I was going to the Mount Athos, and I was going to visit, with the blessing of my Elder Iakovos Tsalikis, Elder Paisios, in order to be advised from him if I should become a monk or not. Elder Iakovos had great reverence for Elder Paisios, and when I went to him, he gave me something to give him as a blessing, and told me: "Tell Elder Paisios, when you reach Thessaloniki, that he should come to see us. As for me, Johnny, it is difficult for me to go see the Elder, because I must pass over mountains, valleys, the sea, and my health does not allow it, not to mention that Elder Paisios is a Saint, I am a sinner and unworthy." He then gave me 5,000 drachmas to light a candle in his chapel.

When I went to the Holy Mountain, I met the Elder right in front of his door. As soon as he saw me--then I was traveling with a hieromonk--he told me:
"Hey, good to see you, good to see you!"

We received his blessing, and he told me:
"Hey, what do you think? Will we make you a monk?"

"Listen to what I tell you, let your parents weep for a month or two, so that you may not weep eternally, and before you loose the treasure." (He was referring to Elder Iakovos, without my telling him where I was thinking of becoming a monk.)

"Elder," I told him, "you have the blessing of Fr. Iakovos from the Venerable David [of Evia]."

"Oh, my child, these are the Saints who are struggling today and who pray with humility and love. I am not worthy to see this giant of Orthodoxy, but it is also a very far distance to meet him, and it requires struggle and much effort. But God has given us love, and we communicate between us spiritually."

"Elder, is it blessed for me to venerate in your chapel for a blessing?"

"Elder, have love, for a blessing."

"No, my child, because maybe Elder Iakovos gave you 5,000 drachmas, and afterwards, what will I do with it, because I'm a monk?"

He did not let me go venerate. He gave me a prayer rope and a little cross to give to the Elder. When I returned to the Monastery, Elder Iakovos received me with joy. And I gave him the gifts from Elder Paisios and immediately he told me: "The 5,000 drachmas which Elder Paisios didn't accept, and that he didn't let you leave by venerating in the chapel, take it with you for your expenses in the school of Lamia." I was stunned.

"Elder, how do you know this?"

And he told me, whispering in my ear: "We, my child, communicate spiritually."

For a similar spiritual encounter in love between St. Paisios and St. Porphyrios, see here. 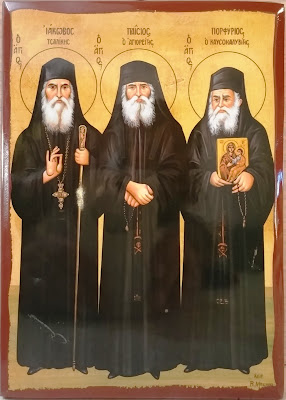 
Christ is risen from the dead, by dead, trampling down upon death, and to those in the tombs, He has granted life!
Truly, the Lord is risen!
Posted by Agioi_Anargyroi at 6:28 AM