Excerpt from the Homily on St. Demetrios by St. Gregory Palamas 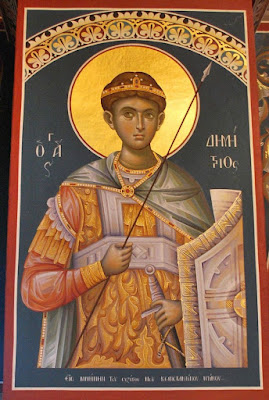 "This Demetrios was a teacher and an apostle, a wise man, a virgin, a venerable one, and as was said, all-comely and all-spotless in nature and greatly radiant with grace. And of this Demetrios, as was said of [the Prophet] Job, there was no one like him upon the earth among men. He was blameless, therefore, righteous and pious. And as Job was beforehand, Demetrios was later, though Job did not have the praise of virginity. For virginity the young [Demetrios] was crowned, for overcoming nature, he was shown to be equal to the Angels according to God. And his body was wounded greatly, by contending with the ancient enemy. He, therefore, withstood to the end even [the shedding] of his blood to fight against evil…

"And therefore this divine Demetrios became spoken of as a wonder for the whole world, the fragrance of Christ, according to St. Paul, for those who are being saved and for those who are redeemed, for the smell of death is death, but that of life is life. This incomparable fragrance I do not have words to speak of, of the myrrh and wonders granted by God from the body of the Great Martyr..."
-Excerpt from the Homily on St. Demetrios by St. Gregory Palamas

(amateur translation of text from source)

See here for the full translations of the homilies of St. Gregory Palamas. 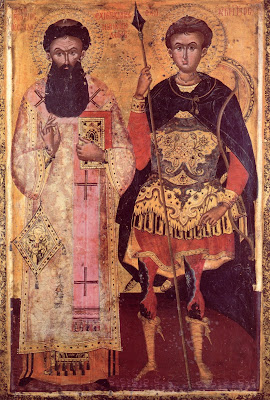 Sts. Gregory Palamas and Demetrios the Myrrh-streamer, the great protectors of Thessaloniki (source)


Through the prayers of our Holy Fathers, Lord Jesus Christ our God, have mercy on us and save us! Amen!
Posted by Agioi_Anargyroi at 7:30 AM