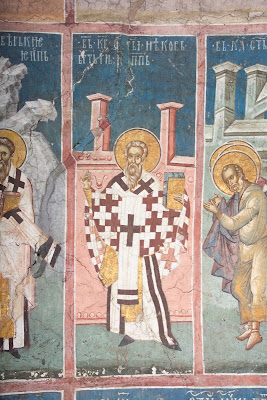 Iakovos (or James, sometime "the Lesser" to distinguish him from St. James the Brother of St. John the Theologian) Adelphotheos (literally the "Brother of God") - Commemorated on October 23rd (taken from http://www.srpskoblago.org/Archives/Decani/exhibits/Menologion/October/CX4K3528_l.html)

"James is called the Lord's brother because he was the son of the righteous Joseph, the betrothed of the Most-holy Theotokos. When the righteous Joseph was near death, he divided his estate among his sons, and wanted to leave a portion to the Lord Jesus, the son of the Most-holy Virgin, but all the other brothers opposed this, not regarding Jesus as their brother. James greatly loved Jesus and declared that he would include Jesus in his share. That is why he is called the Lord's brother. From the beginning, James was devoted to the Lord Jesus. According to tradition, he traveled to Egypt with the Most-holy Virgin and Joseph, when Herod sought to slay the newborn King. 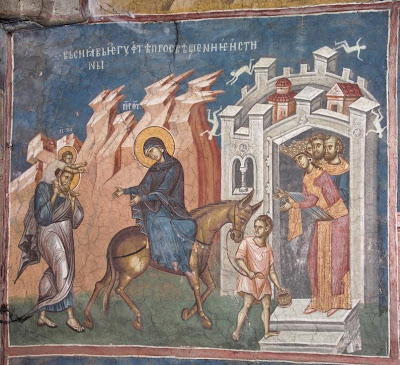 Later, as soon as he heard Christ's teaching, James lived by it. It is said of him that he never ate fat or oil, but lived on just bread and water, and was a virgin to the end of his life on earth. He often kept vigil at night and prayed to God. The Lord numbered him among His Seventy Apostles. Following His glorious Resurrection, the Lord appeared to him especially, as the Apostle Paul testifies (I Corinthians 15:7). He was Bishop of Jerusalem for thirty years and zealously governed the Church of God. At the instruction of the Lord, James compiled the first Liturgy, which seemed very long for later Christians, and St. Basil and St. John Chrysostom shortened it. He converted many Jews and Greeks to the Christian Faith, and even the unbelieving Jews were amazed at his righteousness, referring to him as ``James the Just.'' When Ananias became High Priest, he and other Jewish elders determined to kill James for being a preacher of Christ. Once, during the feast of Passover, when many people had gathered in Jerusalem, the elders forced James to climb onto the roof of the Temple, and tried to make him speak against Christ. He climbed up and spoke to the people of Christ as the Son of God and the true Messiah, of His Resurrection and His eternal glory in the heavens. The infuriated priests and elders pushed him off the roof; he fell and was severely injured, but was still alive. Then, one man ran up and struck him on the head with a fuller's club with such force that his brains spilled out. Thus, this most glorious apostle of Christ died a martyr's death, and went to live eternally in the Kingdom of his Lord. James was sixty-six years old when he suffered for Christ." (taken from: http://www.westsrbdio.org/prolog/prolog.htm) 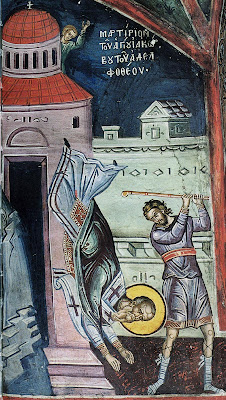 A critical and researched translation of the Liturgy of St. James can be found by Fr. Ephraim Lash at http://www.anastasis.org.uk/lit-james.htm. In his introduction he interestingly discusses the use of St. James' Liturgy:

"The Divine Liturgy of St James, which was until recently only celebrated on the island of Zakynthos on his feast on 23 October and in Jerusalem on the Sunday after Christmas, is today celebrated in an increasing number of Orthodox churches. It was the ancient rite of Jerusalem, as the Mystagogic Catecheses of St Cyril of Jerusalem imply. It is still, in its Syrian form, the principal liturgy of the Syrian Oriental Church, both in Syriac and, in the ancient Syrian Orthodox Church of India, in Malayalam and English."


"Are any among you sick? They should call for the elders of the church and have them pray over them, anointing them with oil in the name of the Lord. The prayer of faith will save the sick, and the Lord will raise them up" (James 5:13-15) 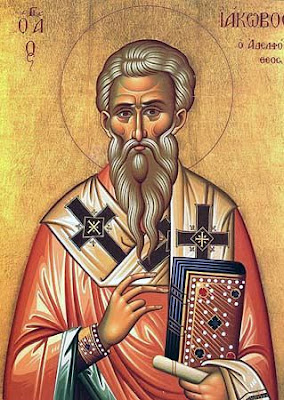 Apolytikion in the Fourth Tone
As the Lord's disciple, O righteous One, you received the Gospel, as Martyr, you have unwavering courage, as the Lord's brother, you have forthrightness, as Hierarch, intercession. Intercede with Christ our God, that our souls may be saved.

Kontakion in the Fourth Tone
O wondrous Iakovos, God the Logos, only-begotten of the Father, who dwelt among us in latter days, declared you, the first shepherd and teacher of Jerusalem, and faithful steward of the spiritual mysteries. Wherefore, we all honor you, O Apostle.
(taken from: http://goarch.org/chapel/saints_view?contentid=254) 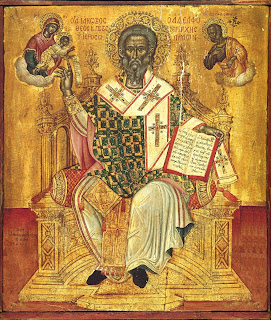 St. James (Iakovos) Adelphotheos, the First Bishop of Jerusalem, depicted enthroned with Christ, the Theotokos, and his father, St. Joseph the Betrothed (alterred from: http://pravicon.com/images/sv/s0848/s0848011.jpg)

St. Iakovos, intercede for us!
Through the prayers of our Holy Fathers, Lord Jesus Christ our God, have mercy on us and save us! Amen!
Posted by Agioi_Anargyroi at 9:30 AM

Wonderful resource!
Thank you and may God bless you!!!