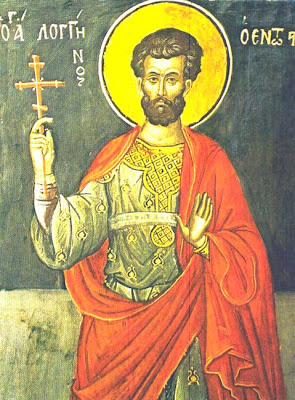 Icon of St. Longinos the Centurion - Commemorated on October 16th (taken from: http://www.christopherklitou.com/icon_16_oct_longinus_the_centurion.htm)
"The divine Matthew the Evangelist, in describing the passion of the Lord Jesus Christ, says: Now when the centurion, and they that were with him, watching Jesus, saw the earthquake, and those things that were done, they feared greatly, saying, Truly this was the Son of God (Matthew 27:54). That centurion was this blessed Longinus, who with two other of his soldiers came to believe in Jesus, the Son of God. Longinus was chief of the soldiers who were present at the Crucifixion of the Lord on Golgotha, and was also the chief of the watch that guarded the tomb. When the Jewish elders learned of the Resurrection of Christ, they bribed the soldiers to spread the false news that Christ did not resurrect, but rather that His disciples stole His body. The Jews also tried to bribe Longinus, but he did not allow himself to be bribed. Then the Jews resorted to their usual strategy: they decided to kill Longinus. Learning of this, Longinus removed his military belt, was baptized with his two companions by an apostle, secretly left Jerusalem and moved to Cappadocia with his companions. There, he devoted himself to fasting and prayer and, as a living witness of Christ's Resurrection, converted many pagans to the true Faith by his witness. After that, he withdrew to a village on the estate of his father. Even there, however, the malice of the Jews did not leave him in peace. Due to the calumnies of the Jews, Pilate dispatched soldiers to behead Longinus. St. Longinus foresaw in the spirit the approach of his executioners and went out to meet them. He brought them to his home, not telling them who he was. He was a good host to the soldiers, and soon they lay down to sleep. But St. Longinus stood up to pray, and prayed all night long, preparing himself for death. In the morning, he called his two companions to him, clothed himself in white burial clothes, and instructed the other members of his household to bury him on a particular small hill. He then went to the soldiers and told them that he was that Longinus whom they were seeking. The soldiers were perplexed and ashamed, and could not even contemplate beheading Longinus, but he insisted that they fulfill the order of their superior. Thus, Longinus and his two companions were beheaded. The soldiers took Longinus's head to Pilate, and he turned it over to the Jews. They threw it on a dung heap outside the city." (taken from: http://www.westsrbdio.org/prolog/prolog.htm ) 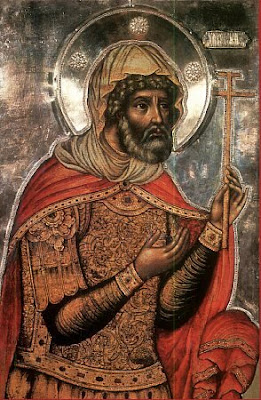 Another icon of St. Longinus the Centurion. Russian icon by Fyodor Zubov, 1680. (taken from http://en.wikipedia.org/wiki/Saint_Longinus )
The following is an account of the finding of his Sacred Head:
"After a while a certain blind widow from Cappadocia arrived in Jerusalem with her son to pray at the holy places, and to ask that her sight be restored. After becoming blind, she had sought the help of physicians to cure her, but all their efforts were in vain. The woman’s son became ill shortly after reaching Jerusalem, and he died a few days later. The widow grieved for the loss of her son, who had served as her guide. St Longinus appeared to her in a dream and comforted her. He told her that she would see her son in heavenly glory, and also receive her sight. He told her to go outside the city walls and there she would find his head in a great pile of refuse. Guides led the blind woman to the rubbish heap, and she began to dig with her hands. As soon as she touched the martyr’s head, the woman received her sight, and she glorified God and St Longinus. Taking up the head, she brought it to the place she was staying and washed it. The next night, St Longinus appeared to her again, this time with her son. They were surrounded by a bright light, and St Longinus said, Woman, behold the son for whom you grieve. See what glory and honor are his now, and be consoled. God has numbered him with those in His heavenly Kingdom. Now take my head and your son’s body, and bury them in the same casket. Do not weep for your son, for he will rejoice forever in great glory and happiness.” The woman carried out the saint’s instructions and returned to her home in Cappadocia. There she buried her son and the head of St Longinus. Once, she had been overcome by grief for her son, but her weeping was transformed into joy when she saw him with St Longinus. She had sought healing for her eyes, and also received healing of her soul.." (taken from http://luke2219.wordpress.com/2008/03/19/112/) 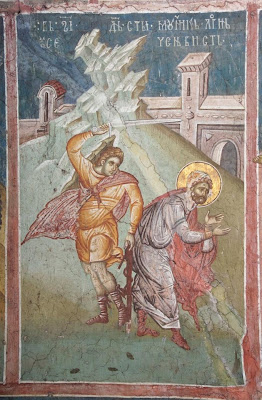 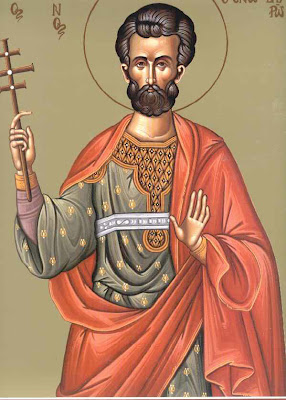 Another icon of St. Longinos the Centurion (taken from: http://vatopaidi.files.wordpress.com/2009/10/161.jpg)
Troparion - Tone 1
Longinus, you beheld the King of Glory who was nailed to the Cross, yet shone on those in darkness. You were enlightened by His rays and became a martyr and save those who cry: Glory to Him who gave you strength! Glory to Him who granted you a crown! Glory to Him who through you grants healing to all!
Kontakion - Tone 4
The Church rejoices in gladness on the day of the commemoration of the ever-memorable athlete Longinus! She cries out: "You are my strength and support, O Christ!"
(taken from: http://www.oca.org/FStropars.asp?SID=13&ID=102980) 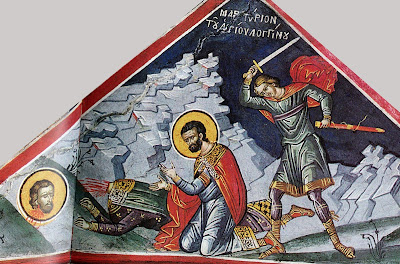 The Martyrdom of St. Longinos (http://pravicon.com/images/sv/s1288/s1288006.jpg)
St. Longinos, intercede for us!
Through the prayers of our Holy Fathers, Lord Jesus Christ our God, have mercy on us and save us! Amen!
Posted by Agioi_Anargyroi at 3:44 PM