Excerpt from the Homily of St. John Chrysostom on the Synaxis of the Archangels 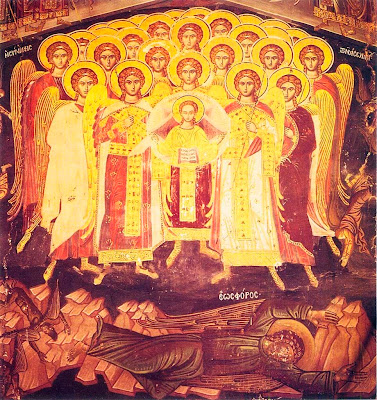 There is need to praise the Angels, for they hymn the Creator, and entreat Him to impart goodness to men. The Angels are honored, for they are our allies against the opposing foes that war against us.


For it was the archangel Michael who fought back [ἀντιταττόμενος] the devil for the body of Moses (Jude 1:9), and the leader of the Persians that freedom might blossom for the people (Daniel 10:13). It was he himself who held back [καταστρέφων] the donkey, and stopped the inappropriate madness of Balaam, for the sorcerer did not reflect on his speaking, where the mute [animal] was made wise to speak (Numbers 22). It was he himself who bore the sword, and urged Jesus of Navi to fight [συμπλέκεσθαι τοῖς πολεμίοις προτρεπόμενος] (Joshua 5-6). It was he who slaughtered the 185,000 Assyrians in one night, and put the barbarians to death during sleep (Isaiah 37:36). It was he who moved the prophet Habakkuk swiftly through the air, that the prophet Daniel might eat amidst the non-feeding lions, for they in reality were not fighting enemies, but ruled over the passions (Daniel 14:32-42).


There also is the wondrous and awesome [Archangel] Raphael (Tobit 12:15), who through a fish healed the possessed girl, and gave light to the blind old man.


But this silence is not worthy of the New Testement, in which a great portion is for the Archangel Gabriel, who ministered to Zacharias, and censured his doubt by making him silent, for he did not believe the dispensation that the barren womb would bear a child (Luke 1:19). It was he who gave good tidings to the pure and unwedded Mariam (Luke 1:26-38). It was he who lead the shepherds to the cave, where they beheld the Uncontainable One in the manger, wrapped in swaddling clothes, and together with them they offered odes in doxology: “Glory to God in the highest, and on earth peace, good will among men.” (Luke 2:8-18) He also urged the Magi to flee the tyrant [Herod], who persecuted the Creator upon the earth (Matthew 2:12). He also told the betrothed of the Virgin not to disdain the spotless one as soiled (Matthew 1:20). He also told them to flee the child-killing of Herod (Matthew 2:13). Even those in the flesh perceived the uncreated, and served as servants. They therefore were amazed by His strength, through which he troubled [the idols] which fell, according to the voice of David: “He will lift them up with his hands, and break them to pieces by throwing stones” [Ἐπὶ χειρῶν ἄραντες αὐτὸν, ἔξω τῆς βολῆς τῶν λίθων ἐκόμιζον.] Therefore, the Judeans looked for stones to throw upon him. He also hastened to [His] Passion, and also after the Resurrection, gathered at the empty tomb, saying to the faithful women: “Why do you seek the Living One among the dead?” (Luke 24:5) After the Ascension, he escorted the disciples, dissolving the bonds of Peter [when he was in prison] (Acts 12), accompanying Paul through his dangers on land and sea (2 Corinthians 11:26), interceding for the faith of Cornelius [the Centurion] (Acts 10), trampling upon Herod, the killer of the righteous (Acts 12:23).


But besides being worthy these great honors, don't [the Angels] also help our lives? For not only are angels placed to protect each nation, as the word cries: “When the Most-high divided the nations, he placed among the nations a number of Angels of God” (Deuteronomy 32:8). But also each man was granted an angel. This is not our word, but that of the Divine Scripture. The child Rhoda, who recognized the apostle Peter before the gates as he was fleeing from Herod's prison, was disbelieved, and they thought that it was his Angel (Acts 12:15). And the Savior Himself bears witness to this, as he says of the life of the small ones of this life: “Do not look down on one of these little ones. I tell you that their angels always behold the face of my Father in the heavens.” (Matthew 18:10) In each Church also, Christ has placed a guardian Angel, as John reveals: “Say to the angel of the Church of Smyrna: I see your poverty and your sorrow, but you are rich...” (Revelation 2:8).
(hosted by a non-Orthodox site: http://www.documentacatholicaomnia.eu/04z/z_0345-0407__Iohannes_Chrysostomus__In_synaxim_archangelorum__MGR.pdf.html) 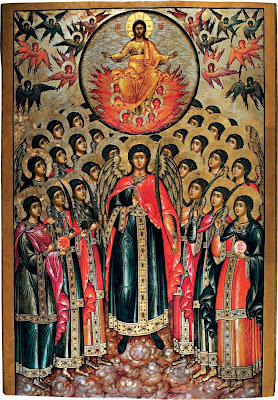 Christ surrounded by the hosts of the Angels (http://pravicon.com/images/icon/0455/0455004.jpg)
Through the prayers of our Holy Fathers, Lord Jesus Christ our God, have mercy on us and save us! Amen!
Posted by Agioi_Anargyroi at 7:35 PM