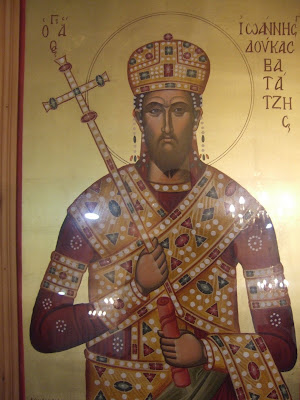 Brief life of the Saint
He was born in Adrianople of Thrace from a great family. He married the daughter of Theodore Laskareos [the writer of the Great Paraklesis to the Theotokos], Irene, and accepted the throne of Nicea (1222-1255AD).

John was a pious and merciful king, and the people loved him greatly for his Christian ways, his meekness, his humility, his good ethics and his commitment to divine things.

Having ruled with Christ-like ethics, he fell asleep in peace on October 30th, 1255. He was buried with great honor in the Holy Monastery of the Savior Christ, which he himself had built, known as Sosandron.
(http://synaxarion.gr/gr/sid/1092/sxsaintinfo.aspx) 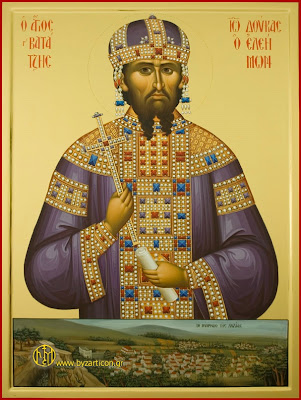 The wondrous Relic of the Saint
The precious body of the most-pious, righteous, brave and merciful king was buried in a Monastery that he had previously built named Sosandra, though later, through the wondrous revelation of John himself, he sought to have the relic transferred to Magnesia [Asia Minor]. When they went, however, to open the tomb to transfer his relic, instead of an odor, there was a sweet fragrance like a garden of flowers. But this is not all. The dead appeared as if he were sitting upon a royal throne, without any darkening, without any odor, without any signs that he was dead! Seven years he was in the tomb, and his color was the same as a live human being. He appeared in reality as if he were alive, but a marble king. And in addition, his clothes appeared incorrupt as if he had just put them on. Thus God glorified those who glorify Him on earth!

In 2001, the Holy Metropolis of Didymoteichou, Orestiados and Soufliou mentioned in their annual calendar: "until 1992, the memory of the emperor John the Merciful was honored every year in the church of Magnesia which he built, and where he found his final repose, and also in Nymphaion, his beloved home" (Ostrogorsky).

But what happened to that Church? What happened to the incorrupt relic of the "Marble King"? What does this have to do with the "legend", or with prophecies of the rebuilding of the City [Constantinople], for which he had suffered so much?
(http://noiazomai.tripod.com/vatatzis.html) 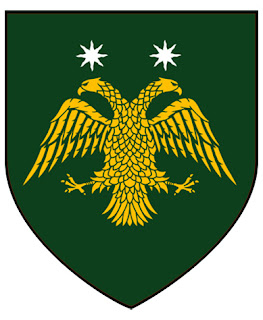 A couple of personal thoughts that come to mind when discussing this righteous man:
One, God ultimately judges our hearts. As a result, almost no career or way of life can serve as an impediment to holiness. We have Saints that were kings, beggars, patriarchs, readers, soliders, actors, physicians, lawyers, teachers, fishermen, artists, farmers, etc. Christ of course acknowledges how difficult it is for those with riches to be saved. Nevertheless, He said: "With man this is impossible, but with God all things are possible." (Matthew 19:24-26). So, by denying ourselves and following Christ through His holy Orthodox Church, we are all called to become Saints and imitators of Christ.

Sketch depicting the tradition of the God-crowned King who will be raised (http://3.bp.blogspot.com/_203Mqpxubsc/SsUiyuqRdaI/AAAAAAAAAK4/8p4mLD6c1ss/s1600-h/0061.bmp, http://3.bp.blogspot.com/_203Mqpxubsc/SsUkE59QWhI/AAAAAAAAALA/vbkTMgi1_1g/s1600-h/0060.bmp)
Also, I should mention that some traditions and prophecies (though this is by no means dogma), hold that St. John Vatatze is either a prototype of a future Orthodox king who will rule Constantinople, or that he is the so-called "Sleeping King", who will himself one day be raised to life again to lead the Orthodox Greek people in the coming difficult times. Again, this is by no means central to Orthodoxy. It is clear however, that though dark and trying days are ahead for the whole world before the Second Coming of Christ, we know that Christ will always preserve His flock, and "the gates of hell will never prevail against it" (Matthew 16:18).

I am unsure how official or widespread St. John Vatatze's veneration is, but there was recently a church built in his honor in Didymoteichos (I believe where he was born), and a service for him has been written (I believe by St. Nikodemos). Part of this is translated below.

May Christ continue to preserve and protect all the Orthodox everywhere, through the prayers of our Holy Fathers! 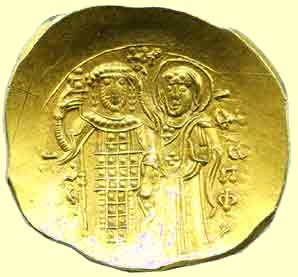 Apolytikion in the First Tone (amateur translations below)
The radiant king and great boast of the faithful, the pride of Didymoteichou, let us honor John in hymns and spiritual odes, as we celebrate his memory, that we might richly be rewarded, crying out together: glory to Christ Who glorified you, glory to Him Who crowned you, glory to Him Who grants to us through you healing for all.
Kontakion in the Fourth Tone
Today, John, the divine ruler, flees his earthly kingdom for the Kingdom of Heaven, leaving for eternity merrily.
Oikos
The Lord, Who foresaw before his birth the good nature of his soul, the uprightness of his heart, and his proclivity to choosing the good path, chose John Vatatze to be ruler of the faithful, having the name of mercy, and being arrayed with many graces, he now is alive in heaven, and after his death has been shown forth a spring of wonders and a stream of healings, and he drives away the spirits of error. Therefore, having rightly and manfully completed his path in God, and having kept the faith, he flees for the Kingdom of Heaven, leaving for eternity merrily.
Synaxarion
On the 4th of the month of November, the memory of the holy, glorious, Godly-crowned king John Vatatze the Merciful, born in Didymotheicho in the year 1193, and departed for the Lord in Nymphaio, Magnesia in the year of salvation 1254.
Verses
Having, O John, heaven as a dwelling place,
Meeting Constantine, the great the former [king].
John meets his end and [hastens towards] the perfect [One] on the fourth.
(http://analogion.com/forum/showthread.php?t=15227&page=2) 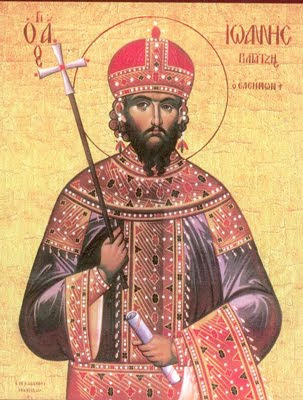 Through the prayers of our Holy Fathers, Lord Jesus Christ our God, have mercy on us and save us! Amen!
Posted by Agioi_Anargyroi at 9:59 AM

Labels: Lives of the Saints, Royalty