Excerpt from the Homily on St. Thomas Sunday by St. John Chrysostom 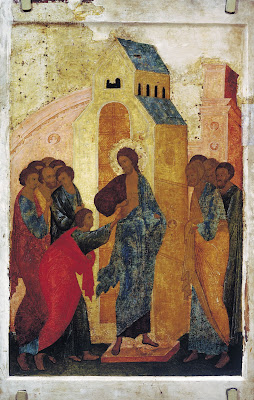 The Touching of Thomas, celebrated on the Second Sunday of Pascha (Antipascha) (http://pravicon.com/images/icon/0438/0438001.jpg)
Excerpt from the Homily on St. Thomas Sunday ("On the New Sunday, and on the apostle Thomas) by St. John Chrysostom (amateur translation)

I have come to be resolved of the debt that has been incurred. For though I am poor, I force myself due to your gratefulness. I promised to show the faithlessness of Thomas, and low I am at hand to give it up to you, for I am willing to be the first to pay off the first debt, that the children of those who have been gathered might not be forfeited. Work, therefore, with me to pay off this debt, and let us entreat Thomas, that his holy right hand which touched the side of the Master might be laid upon our mouths, and innervate my tongue to discourse to you, the fervent ones. I, through the intercessions of the apostle and martyr Thomas, take heart, and preach his former indecision, and his second confession, that has become our Church's armor and foundation. The Savior is coming to His own disciples through locked doors, and again proceeds as he entered, while Thomas along was missing.


This was therefore a work of divine providence, that the separation of the disciple would become a harbinger of increasing safety and surety. For if Thomas had not been absent, he would not have doubted; and if he would not have doubted, he would not have sought strangely; and if he would not have sought, he would not have felt; and if he would not have felt, he would not have been convinced of the Lord and God; and if he did not call Him Lord and God, then neither would we have been taught to hymn Him thus. For Thomas by not being present, has led us towards the truth, and later became more confirmed regarding the faith. Therefore the disciples told Thomas who came last of all: “We have seen the Lord, we have seen He Who said: 'I am the light of the word'; we have seen Him Who said: 'I am the resurrection and the life and the truth', and the words of truth we found truly shining in Him. We have seen Him Who said: 'After three days I will arise, and you will behold the resurrection', and we worshiped Him Who was resurrected. We heard Him tell us: 'Peace be unto you', and our confusion of sadness was transformed into peace and joy. We beheld His hands showing the signs of the nails, we beheld the hands that were railed against by the God-hating dogs in rage; we beheld the hands that brought about our incorruption; we also beheld the side that cried out most radiantly of all with the compassion of He Who was wounded. We beheld the side that is hymned by the angels, and is honored by the faithful, and is trembling to demons. We also received a divine breath from His divine mouth, a spiritual breath, a breath that bestows every grace. We were ordained by the Master to be masters of remission of offenses, and we became lords of the judgment of sinners, for we received the commandment form Him: 'If you forgive the sins of any, they are forgiven, and if you retain the sins of any, they are retained.' Words like these we feasted on from the Savior, and gifts like these we received from Him. For how could we be enriched richly by the Master? And you poor man, will not remain so in the future.


What, therefore, did they say to Thomas? We have seen the Lord? Well, he told them, even if you saw Him, I certainly will not believe the rest. Having seen Him, do you preach Him? As for me, unless I behold in hands the mark of the nails, and place my finger in the mark of the nails, and place my hand into His side, I will not believe. For you did not believe until you first saw Him, and thus with me, I will not believe unless I see. Hold on, O Thomas, with this fervor, and hold on well, that you might see me and that I might confirm you in soul. Hold on, and seek Him Who says: 'Seek and ye shall find'. Do not not stand by simply as an observer, if you do not find the treasure Whom you seek. Hold on, and knock at the door of indisputable knowledge, until He opens to you, Who says: 'Knock, and the door will be opened to you.' I embrace these senseless thoughts, that cut away every senselessness; I love the manner by which you wish to learn, which dashes apart every love of strife; and I especially hear you who say many times: “Unless I see in His hands the marks of the nails, I will not believe.”

For by your doubting, I am taught to believe; by your forked-tongue that revealed the wound on the divine body that was pierced, I harvest the fruit for myself without pain. [For you said] unless I see with my eyes the wounds in His holy hands, then the impious would question, without accepting our words. Unless I place this my finger into the marks of the nails, then they will not receive our Gospel. Unless I place this my hand into that side, the untrampling witness of the resurrection, they will not believe my words...From now on, people will be preached of the wonders of the teacher: how will they accept these without seeing with their eyes? How will the faithless come to believe, and ultimately follow Him Whom I did? Will I say to the Judeans and Greeks that the Crucified One and my Master is risen, but I did not see Him, but simply heard of Him? And who will not laugh at my voice? Who will not ignore my preaching? It is one thing to hear, and another to see. It is one thing to receive words, and another to see and touch something. Therefore doubt conquered the mind of Thomas, and after eight days again the Master appeared to His disciples who were gathered together. He left Thomas during these days to be preached to by the others, and to fill him with the thirst for the vision of Him, and his soul was greatly inflamed with the desire to see. Therefore, at the proper time, the one who was desiring perceived the One Who is desired.
(http://khazarzar.skeptik.net/pgm/PG_Migne/John%20Chrysostom_PG%2047-64/In%20novam%20dominicam%20et%20in%20apostolum%20Thomam.pdf) 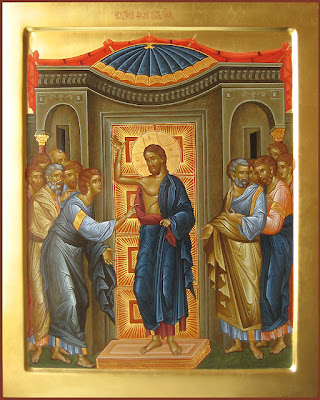 Christ again appearing to His disciples, and the touching of St. Thomas (http://pravicon.com/images/icon/0438/0438002.jpg)
Christ is risen from the dead, by death trampling down upon death, and to those in the tombs, bestowing life!
Truly the Lord is risen!
Posted by Agioi_Anargyroi at 9:56 AM