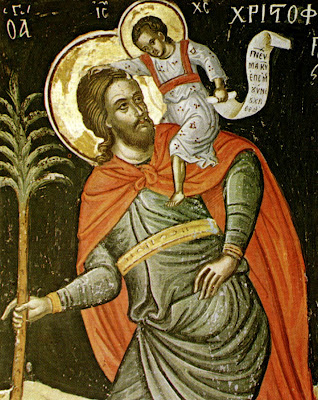 The Holy Martyr Christopher lived during the third century and suffered about the year 250, during the reign of the emperor Decius (249-251). There are various accounts of his life and miracles, and he is widely venerated throughout the world. St Christopher is especially venerated in Italy, where people pray to him in times of contagious diseases.

There are various suggestions about his descent. Some historians believe that he was descended from the Canaanites, while others say from the "Cynoscephalai" [literally "dog-heads"] of Thessaly.

St Christopher was a man of great stature and unusual strength. According to tradition, St Christopher was very handsome, but wishing to avoid temptation for himself and others, he asked the Lord to give him an unattractive face, which was done. Before Baptism he was named Reprebus [Reprobate] because his disfigured appearance. Even before Baptism, Reprebus confessed his faith in Christ and denounced those who persecuted Christians. Consequently, a certain Bacchus gave him a beating, which he endured with humility. 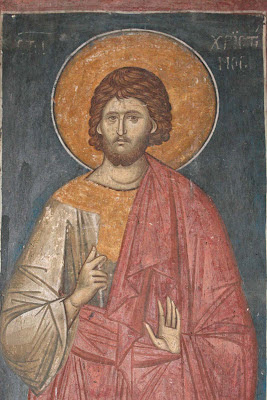 [Note: Due to St. Christopher's unattractive appearance, some iconographers depict him with the head of a dog. This is incorrect, as the Saints in Christian iconography are depicted more so according their spiritual realities (in which sense the beauty of the Saint's soul is immense) than according to their physical appearances.]

Because of his renowned strength, 200 soldiers were assigned to bring him before the emperor Decius. Reprebus submitted without resistance. Several miracles occurred along the way; a dry stick blossomed in the saint's hand, loaves of bread were multiplied through his prayers, and the travellers had no lack thereof. This is similar to the multiplication of loaves in the wilderness by the Savior. The soldiers surrounding Reprebus were astonished at these miracles. They came to believe in Christ and they were baptized along with Reprebus by St Babylus of Antioch (September 4). 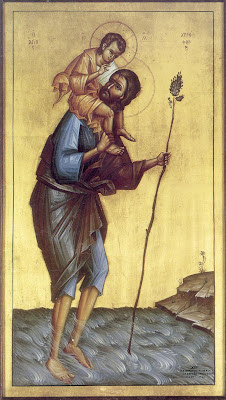 St. Christopher the Great Martyr, carrying Christ upon his back (http://pravicon.com/images/sv/s2198/s2198007.jpg)

Christopher once made a vow to serve the greatest king in the world, so he first offered to serve the local king. Seeing that the king feared the devil, Christopher thought he would leave the king to serve Satan. Learning that the devil feared Christ, Christopher went in search of Him. St Babylas of Antioch told him that he could best serve Christ by doing well the task for which he was best suited. Therefore, he became a ferryman, carrying people across a river on his shoulders. One stormy night, Christopher carried a Child Who insisted on being taken across at that very moment. With every step Christopher took, the Child seemed to become heavier. Halfway across the stream, Christopher felt that his strength would give out, and that he and the Child would be drowned in the river. As they reached the other side, the Child told him that he had just carried all the sins of the world on his shoulders. Then He ordered Christopher to plant his walking stick in the ground. As he did so, the stick grew into a giant tree. Then he recognized Christ, the King Whom he had vowed to serve. 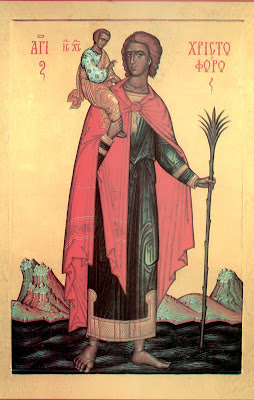 St Christopher was brought before the emperor, who tried to make him renounce Christ, not by force but by cunning. He summoned two profligate women, Callinike and Aquilina, and commanded them to persuade Christopher to deny Christ, and to offer sacrifice to idols. Instead, the women were converted to Christ by St Christopher. When they returned to the emperor, they declared themselves to be Christians.Therefore, they were subjected to fierce beatings, and so they received the crown of martyrdom.

Decius also sentenced to execution the soldiers who had been sent after St Christopher, but who now believed in Christ. The emperor ordered that the martyr be thrown into a red-hot metal box. St Christopher, however, did not experience any suffering and he remained unharmed. After many fierce torments they finally beheaded the martyr with a sword. This occurred in the year 250 in Lycia. By his miracles the holy Martyr Christopher converted as many as 50 thousand pagans to Christ, as St Ambrose of Milan testifies. The relics of St Christopher were later transferred to Toledo (Spain), and still later to the abbey of St Denis in France. 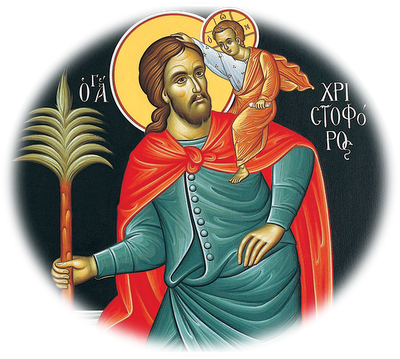 The name Christopher means "Christ-bearer." This can refer to the saint carrying the Savior across the river, and it may also refer to St Christopher bearing Christ within himself (Galatians 2:20).
(http://ocafs.oca.org/FeastSaintsViewer.asp?SID=4&ID=1&FSID=101334)

Note that St. Christopher is considered a patron Saint for travelers and drivers, thus many Christians place his icon in their modes of transportation. And finally, pilgrims to the Holy Mountain can venerate the Holy Skull of St. Christopher at Karakallou Monastery. (http://en.iconskarakallou.gr/about-the-monastery/)

St. Christopher the Great Martyr (http://days.pravoslavie.ru/jpg/ih4253.jpg)
Troparion - Tone 4
O Christopher, robed in the purple of your martyrdom, you came before the Lord of heaven; therefore with the choirs of angels, you now sing the Thrice-Holy Hymn. Intercede for the salvation of those who honor you.
(http://ocafs.oca.org/FeastSaintsViewer.asp?SID=4&ID=1&FSID=101334)


Kontakion in the Fourth Tone (amateur translations below)
Bearing Christ in your soul, O glorious one, with strength you deposed the leaders of the enemies, therefore entreat Christ, O Christopher, on behalf of our souls.

Megalynarion
O inscrutable and steadfast martyr, large in form and God-bearing in mind, you astonished the hordes of the enemies, and you struggled beyond nature with fervor for your Creator.
(http://www.synaxarion.gr/gr/sid/3077/sxsaintinfo.aspx)

St. Christopher the Great Martyr (by Photi Kontoglou) (http://2.bp.blogspot.com/-XSFDPouHKxA/TcgYgda-_dI/AAAAAAAAP5Y/LKZTlxGNTSY/s1600/christopher%2Bby%2Bkontoglou.jpg)
Christ is risen from the dead, by death trampling down upon death, and to those in the tombs, bestowing life!
Truly the Lord is risen!
Posted by Agioi_Anargyroi at 10:49 AM