St. Mokios the Hieromartyr and Unmercenary of Amphipolis

St. Mokios the Hieromartyr and Unmercenary of Amphipolis - Commemorated on May 11 (http://ocafs.oca.org/FeastSaintsViewer.asp?SID=4&ID=1&FSID=101349)
The Life of the Saint
Saint Mocius was a presbyter in Macedonia in the city of Amphipolis. During a persecution against Christians under the emperor Diocletian (284-305), St Mocius exhorted the pagans who had assembled for the pagan festival of Dionysus (Bacchus), to abandon iniquity and the vile customs which accompanied this celebration. He urged them to repent and be converted to the Lord Jesus Christ, and be cleansed through holy Baptism.

The saint was brought to trial before the governor of Laodicea. When threatened with torture, he replied, "My death for Christ is a great accomplishment for me." St Mocius was subjected to torture, which he bore with marvelous endurance, and did not cease to denounce the idol-worshippers.

Taken to the pagan temple of Dionysus, the saint shattered the idols when he called upon Jesus Christ. After this he was put into a red-hot oven, where he remained unharmed, but the flames coming out of the oven scorched the governor. 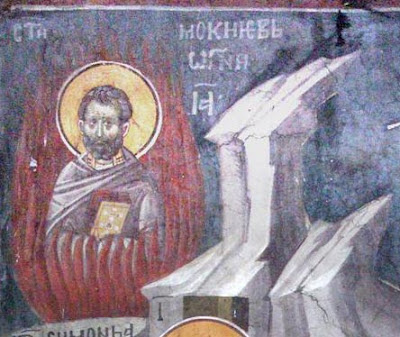 Again the commander subjected St Mocius to fierce torture, which he endured with the help of God. He was given to wild beasts to be eaten, but they did not touch him. The lions lay down at his feet. The people, seeing such miracles, urged that the saint be set free. The governor ordered the saint to be sent to the city of Perinth, and from there to Byzantium, where St Mocius was executed.

Before his death he gave thanks to the Lord for giving him the strength to persevere to the very end. His last words were, "Lord, receive my spirit in peace." Then he was beheaded. St Mocius died about the year 295. Later, the emperor Constantine built a church in honor of the hieromartyr Mocius and transferred his holy passion-bearing relics into it.
(http://ocafs.oca.org/FeastSaintsViewer.asp?SID=4&ID=1&FSID=101349)

Note: St. Mokios is considered one of the Twenty Holy Unmercenary Physicians (http://full-of-grace-and-truth.blogspot.com/2008/10/synaxis-of-holy-unmercenaries.html), and as such is invoked in the blessings of Holy Water and Holy Unction.

On the Church of St. Mokios in Constantinople
Note that [the church of] Saint Mokios was originally built by Constantine the Great (324-37), when a large number of pagans lived in that area. And there was a temple of Zeus there, on the site of which )

The Cistern of St. Mocius was one of the seven open-air cisterns of Constantinople. It was named due to its proximity to the Church of St. Mokios (which I believe is no longer standing). The cistern exists to this day as a park.

May St. Mokios intercede for us all and help us!

Apolytikion in the First Tone (amateur translations below)
Serving Christ as a priest of glory, you offered yourself as a rational sacrifice, and a whole-burnt offering on the coal of your struggles, therefore, O Mokios, you were crowned with dual crowns for your struggles by Him Who glorified you: Christ, Who loves mankind.

Kontakion in the Second Tone
Arming yourself with the barred-gate of the faith, you conquered the ranks of the impious, and received the crown of glory from the Lord, O blessed Mokios, therefore, as you rejoice with the angels, deliver those who hymn you from dangers, entreating ceaselessly on behalf of us all.

Megalynarion
Mocking* the delusion of the enemy, as the godly priest of piety, you were strengthened in struggles amidst weakness, O Martyr, and you protect from the darkness, O Mokios the glorious.
(http://www.synaxarion.gr/gr/sid/3101/sxsaintinfo.aspx)
*Note: The gerund "Μωκώμενος" closely resembles the Saint's name, "Mokios".
Christ is risen from the dead, by death trampling down upon death, and to those in the tombs, bestowing life!
Truly the Lord is risen!
Posted by Agioi_Anargyroi at 8:03 PM

I reder often to your blog post of holy anargyroi. It seems that most of the faithful brothers & sisters do not know of many of these saints, particularly the women.

Any thaughts, icons of St. Sofia?

Thank you for the information!

See the following link for what little information I could find on St. Sophia the Physician and Martyr: http://full-of-grace-and-truth.blogspot.com/2012/05/st-sophia-martyr-and-physician.html.