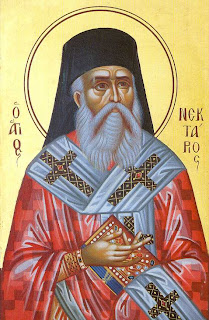 
From the Chancellor of the Holy Metropolis of Kydonies, Archimandrite Damaskenos Lionake
Early on December 28th, we reached the Navy Hospital of Athens together with fellow workers from the Metropolis, where his Eminence Metropolitan Damaskenos was sick in critical condition.
It suffices to say that he was suffering from dysfunction of his vital organs, sepsis, icterus, pancreatitis, and many other organ complications! The vital placement of a stent, which was decided ultimately by Dr. Gerasimos Stephanides, was not at all an easy one. The prolonged suffering of our Shepherd impressed on us that his health was even more fragile.
At the “Evangelismos” Hospital, Drs. Evangelos Kokkinakes and Soterios Prigoures spoke of the last moments of his Eminence. Human medicine had reached its end, and around us there was utter speechlessness...Instants of great agony and “unity of heart”...
With faith we took refuge in the help of our great God, and the intercessions of the wonderworker St. Nektarios, whose relic we had taken with us from the Monastery of the Holy Trinity.
We approached the sick Bishop and placed the grace-flowing relic on him, and read prayers and prayed “within our strength”. He did not show any sign of communication with the outside world. He only clutched the reliquary, and took deep breaths due to aspiration.
In a short time they took him to the operating room. Those near him, about twenty people, waited outside the operating room in agony.
Two hours later, having waited with agony, the door to the operating room opened. The doctor called us, and told us: “Listen. I struggled greatly. A divine hand led me, because I was lost. I had never before met such a complex situation”... Immediately we were “born with rejoicing”!
Agony had given way to relief. Our hearts were sure that St. Nektarios had helped the doctor during the surgery, and contributed to its wondrous success! It was St. Nektarios!
It was he who, for so many years, supported his Eminence, who helped him in his life and his work, who blessed him “from on high” and guided him in his difficulties, in temptations and trials, he who is “speedy to help” and the “free physician”, who “pours forth healing of all kinds”, the new boast of the inhabitans of Chanion, who had confirmed his holiness even before his canonization!
“Things that are impossible for men are possible for God” (Luke 18:27), as the unlying mouth of the Lord bears witness, and “nothing is impossible for St. Nektarios”, as was preached by the blessed Demetrios Panagopoulos, the grace-bearing lay preacher and man of God. Another page had been added to the many pages of wonders of St. Nektarios.
May the name of God be glorified, through the intercessions of St. Nektarios, Whose “mercy surrounded us like a fortified city” (Psalms 30:22).
His Eminence our Metropolitan grants to us “the grace of God” in the place of his pastoral service, in the blessed city of Chanion. We judge it necessary to thank those who worked towards his healing and therapy, those medical doctors who served him with consistency and humanity, those who with hope served vigil near his pillow, those who prayed for the improvement of his health, those who supported and strengthened him in his trial, those who served the wonder of his healing in many ways!
“May the mercy of the Lord be with them all. Amen”
(source)
Through the prayers of our Holy Fathers, Lord Jesus Christ our God, have mercy on us and save us! Amen!
Posted by Agioi_Anargyroi at 5:58 AM