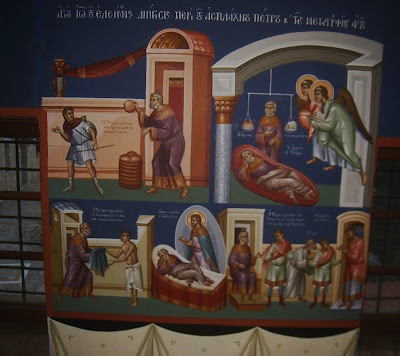 St. Peter the Merciful, whose life was first related by St. John the Merciful - Commemorated September 22 (Icon from the Skete of St. Anna, Mount Athos) (source)
When a man clearly senses God's mercy toward him, he is startled, as from a dull and senseless dream, and becomes ashamed of his long blindness to God's unceasing compassion.

In the time of Emperor Justinian (527-565), the chief imperial tax collector in Africa was a certain Peter, a very wealthy but very hard and merciless man. The beggars grumbled among themselves, that not one of them had ever received alms from Peter. Then, one of them bet that he would succeed in getting alms from Peter. He persistently begged alms of the miser until Peter, in a rage, hit him with a loaf of bread, since he had nothing else close at hand. Joyfully the beggar took the bread and fled.

Immediately after this Peter became seriously ill and had this vision: He was being interrogated by demons in the other world. There was a scale, and on one side of it, the demons heaped Peter's sins, making that side extremely heavy. On the other side - which was empty - angels stood, sorrowing that they had not even one good deed in Peter's life to help balance the scale. One of them said: "We have nothing to place on the scale except one loaf of bread, with which he struck a beggar the day before yesterday." The angels placed this one loaf of bread on the empty side of the scale, and that loaf of bread outweighed the other side of the scale, laden with all of Peter's sins.

When the vision was over Peter said to himself: "Indeed, this was not an apparition but the living truth, for I saw all my sins from my youth. And when I can be helped so much by one loaf of bread that I threw at a beggar, how much help would I receive from many deeds of almsgiving, performed from the heart and with humility?"

And from that time, Peter became the most compassionate man in his town. He distributed all of his possessions to the poor, and when he had finished distributing his possessions, he sold himself into slavery for thirty gold pieces and distributed even his own price as a slave to the poor as alms in the name of Christ. He was, thereafter, called Peter the Merciful.

He who gives to the poor, gives to Christ. This is the meaning of the Gospel teaching, and it has been confirmed in the experience of the saints.

Upon his repentance, Peter the Merciful gave alms to the poor wherever the opportunity presented itself. On one occasion Peter encountered a shipwrecked man who had barely managed to save his naked body from the wreck. The man begged him for some clothing. Peter removed his costly cloak and clothed the naked man with it. Shortly afterward, Peter saw his cloak in the shop of a merchant, who had it displayed for sale. Peter was very saddened that the shipwrecked man had sold his cloak instead of using it for himself. Peter thought: "I am not worthy; the Lord does not accept my alms."

But later, the Lord appeared to him in a dream. He appeared as a handsome man, brighter than the sun, with a cross on His head, wearing Peter's cloak. "Peter, why art thou sad?" asked the Lord. "My Lord, why would I not be sad, when I see that which I gave to the poor being sold at the market?" Then the Lord asked him: "Dost thou recognize this garment on Me?" Peter replied: "I recognize it, Lord; that is my garment with which I clothed the naked man." Then the Lord spoke to him again: "Therefore do not be sad; thou gavest it to the poor man, and I received it, and I praise thy deed."
(sources: http://www.johnsanidopoulos.com/2010/09/st-peter-merciful-by-giving-to-poor-he.html, http://www.johnsanidopoulos.com/2010/09/saint-peter-merciful-prototype-of.html)


Through the prayers of our Holy Fathers, Lord Jesus Christ our God, have mercy on us and save us! Amen!
Posted by Agioi_Anargyroi at 11:19 AM