A wondrous appearing and healing of St. Porphyrios 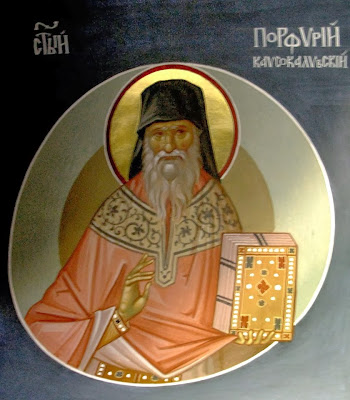 St. Porphyrios of Kavsokalyvia (icon from the chapel of Kovil Monastery, Serbia) (source)

In the book, "Taxideuontas sta teixe tes poles" ("Traveling the walls of the city"), Nun Porphyria mentions a wondrous appearance and a great miracle of [Saint] Porphyrios, which shows that life continues after death, and teaches us that we should never loose hope, for God is All-Good and All-Powerful.

It was 2PM, and I was in the Square "Agion Anargyron" of Athens.

I was stopped at a light facing Athens. A man approached me..."Can you take me to Menidi?"

The man stood in front of me, and was waiting for another taxi to pass by. Something within me said that I should help him. I made a sign for him to come over. As soon as he entered the taxi, he exclaimed: "It's impossible!" And he took the photograph of Elder Porphyrios [that I had in the taxi] in his hands, and kissed it. At that instant, the light changed, and I turned to head towards Menidi. I wanted to take back the photograph, but when I saw how much he looked at it with longing, I regretted my thought.

"Do you know him?" He asked me.
"No, but from his books I got to know him and love him very much."
"Do you want, my lady, to hear how I got to know him?"
"Of course" I replied with joy.
"I heard that my wife was gravely sick, with cancer. The doctors gave her three months to live. During that time, my oldest son was finishing high school. And he told us that he had arranged to go with ten of his fellow students to Mount Athos for a week. We said it was alright; the children left.

"In the meantime, my wife took a turn for the worse. The doctor that was following her told us that the end was near. We asked him in anguish: 'Doctor, what can we do to give her a little more life?' He replied: 'We can do a surgery, and may God help!' he replied. I agreed, and my wife consented, because she wanted to remain until our son returned.

"My son returned so happy, so joyous, like we had never seen him before. He told us how beautiful it was there, and how warmly the monks received them, and how much peace he sensed within his soul. He said that he sensed the presence of God so much that he had forgot that his mother was sick. She was reminded, when Elder Porphyrios appeared before him. He told us some wondrous things about Elder Porphyrios, which appeared unbelievable to us."

"All the children were sitting below a tree, and speaking and laughing, when straightaway a monk approached them. They stood up and kissed his hand, and the Elder began to say each child's name. As you could image, the children were surprised that he knew their names and families. To my son he said: 'Tell your mother to not have surgery, she's all better!'

"'I'm sorry, children, you saw this Elder on Mount Athos? Are you sure?'
"'Of course we're sure,' they replied, 'we all talked with him. And of course we were surprised that he knew our names and our families. When we asked him who he was, he replied that he was Elder Porphyrios.'
"'Children, I'm sure that you saw him, but...Don't be alarmed when I tell you...The Elder has been dead for five years!'
"The children were shocked! 'Impossible!' they said, we just were speaking to him!'

"And my wife and I believed that they saw someone else, who looked like him and called himself Porphyrios. Because all monks resemble each other.

"'You don't believe me, eh? In any case, he said that you should not get the surgery, because you are well,' the child said to his mother. Two days later, we went to the hospital. The next morning, the surgery would have taken place. The time came, and though I was waiting with anguish outside the operating room, right away, I saw my wife come out. I ran near her and asked: 'What happened?'
"'I'm not getting an operation, I am well!'

"The doctor came out from behind her. 'What happened, Doctor?'
"'I don't know, she doesn't want to get the operation!'
"'I told you," she said, 'I am better!'
"'Honey, are you crazy?' I took her in my arms and tried to convince her that she needed the surgery. She replied: 'I told you that I feel better. Do the tests and you will see that I am better, I feel it!'

"'Great!' said the doctor, 'Let's not force her, if she is feeling well.'
"'You don't believe? Great! Do your tests to confirm this.'

"In reality, the tests were run. The next day the results came back, and the doctor took on a grave appearance."'What did the tests show?' we asked him. It was as if the sickness had never touched her! The doctors looked at the old tests and the new ones, and were going crazy! It's impossible, and they said they would have to order new ones the next day, they said in surprise.

"When my son came, and saw the doctors ordering more tests, he told me: 'Why don't you believe that which Elder Porphyrios said on Mount Athos?'
"Then, the doctor said: 'What did you say? Did you mention Elder Porphyrios?'
"'He said that my mom is well and should not get the surgery!'

"The doctor pulled out a photograph of Elder Porphyrios from his pocket. 'You saw him, my boy, on Mount Athos?'

"'The tests are correct! Your wife is well, and now you can leave for sure! Go get ready!'

"The doctors had given my wife three months to live. Two years have passed since then, and she is much better than she was before her sickness. Because of this, I love Elder Porphyrios very much. We have been to the Monastery many times. And whenever we have difficulties, he strengthens us."

This man's story of another miracle of our Elder, gave me great joy. The only thing that I whispered as the man departed was: "Thank you."
(Amateur translation of the text from: source)


Through the prayers of our Holy Fathers, Lord Jesus Christ our God, have mercy on us and save us! Amen!
Posted by Agioi_Anargyroi at 12:19 PM