Thousands gathered in the monastery of St. Porphyrios in Milesi 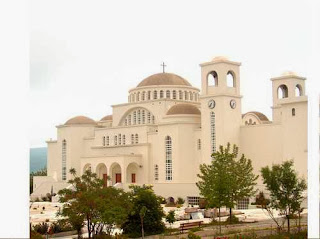 The Divine Liturgy was celebrated in the Katholikon of the monastery, which was built by the Venerable one himself, and was led by the Metropolitan of Philadelphia Meliton, of the Ecumenical Patriarchate.

“Though all these twenty-two years have passed, the all-holy face of St. Porphyrios continues to remain imprinted on the memory and the heart of all those who had the blessing to know him and to speak with him” said Metropolitan Meliton, who offered to those present the blessings of the Ecumenical Patriarch Bartholomew.

The Metropolitan characterized the Saint as “archdeacon of offering to his fellow men”, who became “in everything, the type of Christ.”

There is an absence of worthy men
“In today’s difficult state and period, which has come upon the world and the blessed people of Greece, who have furthermore lost their faith in all forms of anointed rulers and supposed spiritual fathers, and are found in utter loss, and while there is an absence of worthy men to show them the road and the way out from the wrong way from the general crisis, misfortune and trials, our Elder, St. Porphyrios, shows them another path. And this is the path of love, the path of transfiguration”, Metropolitan Meliton noted.

The canonization of Elder Porphyrios occurred this past week by the Ecumenical Patriarchate.
Amateur translation of text from here. See the link for a video of the first Divine Liturgy in honor of St. Porphyrios at the monastery founded by him in Milesi, Attica, Greece.

Also see here for more information, pictures and video.
Through the prayers of our Holy Fathers, Lord Jesus Christ our God, have mercy on us and save us! Amen!
Posted by Agioi_Anargyroi at 7:57 AM