St. John the Theologian, and the Miraculous Manna of his tomb 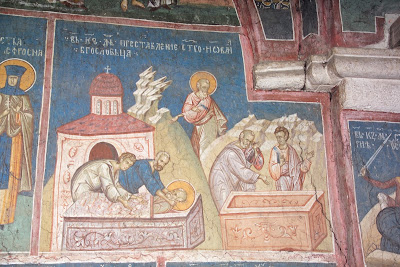 Icon of St. John being buried and his tomb in Ephesus found empty, from Decani Monastery (taken from: http://www.srpskoblago.org/Archives/Decani/exhibits/Menologion/September/CX4K3481_l.html)

"The feast day of this great apostle and evangelist is celebrated on September 26. This day (May 8) commemorates the miracle which appeared at his grave. When John was over one hundred years old, he took seven of his disciples, went outside the town of Ephesus and ordered them to dig a grave in the form of a cross. After that, the elder went down into this grave and was buried. Later on, when the faithful opened John's grave, they did not find his body. On May 8 of every year, dust [also called "manna"] is raised from his grave from which the sick are healed of various diseases." (taken from the Prologue of St. Nikolai from: http://www.westsrbdio.org/prolog/prolog.cgi) 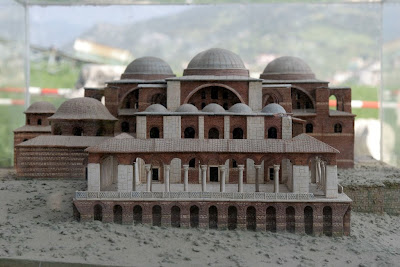 An artistic reconstruction of how St. John's Basilica (built by the Holy Emperor Justinian) over his Tomb in Ephesus might have looked (taken from: http://www.sacred-destinations.com/turkey/images/ephesus/basilica-st-john/model-cc-slimnastics.jpg)

The following is from an interesting study of the various pilgrimage sites throughout Asia Minor:
"The most elaborate description of the miracle [of the Manna from St. John the Theologian's Tomb] dates from the very end of the Byzantine period, written by the Catalan Muntaner who arrived in a mercenary force in 1304:
On Saint Stephen’s day, every year, at the hour of vespers, there comes out of the tomb (which is four-cornered and stands at the foot of the altar and has a beautiful marble slab on the top, full twelve palms long and five broad) and in the middle of the slab there are nine very small holes, and out of these holes, as vespers are being sung on St. Stephen’s day (on which day the vespers are of St. John), manna like sand comes out of each hole and rises a full palm high from the slab, as a jet of water rises up. And this manna issues out . . . and it lasts all night and then all Saint John’s day until sunset. There is so much of this manna, by the time the sun has set and it has ceased to issue out, that, altogether, there are of it full three cuarteras of Barcelona [about 120 quarts]. And this manna is marvelously good for many things; for instance he who drinks it when he feels fever coming on will never have fever again. Also, if a lady is in travail and cannot bring forth, if she drinks it with water or with wine, she will be delivered at once. And again, if there is a storm at sea and some of the manna is thrown in the sea three times in the name of the holy Trinity and Our Lady Saint Mary and the Blessed Saint John the Evangelist, at once the storm ceases. And again, he who suffers from gall stones, and drinks it in the said names, recovers at once. And some of this manna is given to all pilgrims who come there; but it only appears once a year."
(taken from "Pilgrimage in Medieval Asia Minor" by Foss, taken from: http://www.doaks.org/publications/doaks_online_publications/DOP56/DP56ch09.pdf) 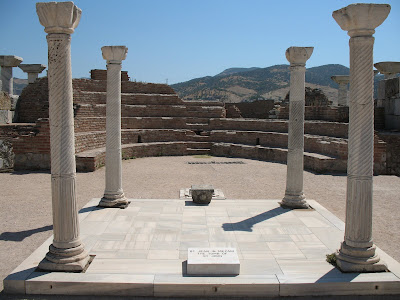 Picture of the Tomb of St. John the Theologian as it appears today, in the ruins of his Basilica in Ephesus (taken from: http://upload.wikimedia.org/wikipedia/commons/7/74/Tomb_of_Saint_John_the_Apostle.jpg)

And a Russian Abbot Daniel from the early 12th century, who recorded his pilgrimage to the Holy Land, also visited St. John's Tomb, and mentions the various other holy places near St. John's Basilica:
"It is 60 versts from the isle of Chios to Ephesus; and at this latter place is seen the tomb of St. John the Evangelist. On the anniversary of his death, holy dust rises from this tomb, which believers gather as a remedy against every kind of disease; the garment which John wore is also here. Quite near is the cave in which rest the bodies of the Seven Sleepers who slept for 360 years, having fallen asleep in the reign of the Emperor Decius, and awakened in the time of the Emperor Theodosius. In this same cavern are the (remains of the) three hundred holy fathers and of St. Alexander; the tomb of Mary Magdalene is also here, as well as her head; and the holy Apostle Timothy, the disciple of St. Paul, reposes in his ancient coffin. In the old church the picture of the Holy Virgin is preserved; it was with this that the holy (fathers) refuted the heretic Nestorius. Here, too, one sees the Bath of Dioscorides, where St. John the Evangelist laboured with Prochorus in the house of Romana. We saw, also, the harbour, named the 'Marble Port,' where St. John the Evangelist was cast up by the sea." (taken from: http://chass.colostate-pueblo.edu/history/seminar/daniel/daniel2.htm)

Note that the Synaxarion also mentions that the tomb of St. Hermione (September 4th), and the relics of Sts. Audaktos and his daughter St. Kallisthenis (October 4th), and those of other martyrs and bishops, Sts. Aristonos, Tyrannou, Aristoboulos and Paul the Desert-dweller were all found near St. John's Tomb (taken from: http://www.snhell.gr/references/synaxaristis/search.asp). Thus, Ephesus was considered truly a sacred place, but most of all because of the presence St. John the Theologian, the one who reclined on Christ's bosom, and His Beloved Disciple. May he intercede for all of us and help us!

Icon of St. John the Theologian, the Beloved Disciple of Christ (taken from: http://www.photosled.com/data/1985/0508_Ioannis_Theologos.jpg)

Apolytikion of St. John the Theologian in the Second Tone
Beloved Apostle of Christ our God, hasten to deliver a people without defense. He who permitted you to recline upon His bosom, accepts you on bended knee before Him. Beseech Him, O Theologian, to dispel the persistent cloud of nations, asking for us peace and great mercy.

Kontakion in the Second Tone
Who can recount your greatness, O virgin, for miracles flow and healing springs forth from you. You intercede for our souls, as the Theologian and friend of Christ. (hymns taken from: http://goarch.org/chapel/saints_view?contentid=44)

Christ is Risen from the dead, by death, trampling down upon death, and to those in the tombs, bestowing life!
Truly the Lord is risen!
Posted by Agioi_Anargyroi at 7:08 AM

Writing from Selçuk, Turkey, site of the ruins of the Church and of the tomb of the holy St. John the Theologian, I thank you for 'Full of Grace and Truth', with the writings of the Catalan Muntaner and Abbot Daniel which bring the holy place to life in ways that secular guidebooks never could.

Near to here also is the (reconstructed) house to which the Theologian brought the Most Blessed Virgin to live out the last years of her life before her Dormition-- a house visited by the Orthodox, by western Catholics, and even by Muslims (the Blessed Theotokos is honored even in their Koran!).

Other than the Holy Land itself, I can imagine no place on earth where we may be closer to the Blessed Theotokos and to the founders of our Christian faith. Again, thank you for this website.