The Holy Martyr and Unmercenary St. Thallelaios, and those with him 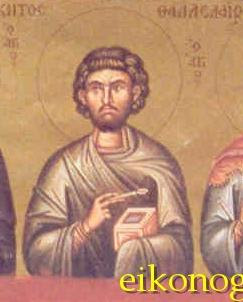 St. Thallelaios the Martyr and Unmercenary, taken from the full icon of the Synaxis of the Holy Unmercenaries (Icon courtesy of www.eikonografos.com used with permission)
The following reading is taken from http://ocafs.oca.org/FeastSaintsViewer.asp?SID=4&ID=1&FSID=101446:
"The Martyrs Thallelaeus, Alexander and Asterius [Commemorated on May 20] lived during the reign of Numerian (283-284). The prefect of the city of Aegea sent soldiers to seek out Christians. They brought to him Thallelaeus, an eighteen-year-old blond-haired youth. To the prefect's questions St Thallelaeus replied, "I am a Christian, a native of Lebanon. My father, Beruchius, was a military commander, and my mother was named Romylia. My brother is a subdeacon. I, however, am studying medicine under the physician Macarius. During a former persecution against Christians in Lebanon, I was brought before the prefect Tiberius, and barely escaped execution. But now that I stand before this court, do with me as you will. I wish to die for Christ my Savior and my God, and hope to endure all torments with His help."

The enraged prefect ordered the two torturers Alexander and Asterius to bore through the knees of the martyr, pass a rope through the bone, and suspend him head downwards. But the executioners, by God's design, bored into a block of wood, which they hung up in place of the martyr. When the prefect saw that they had deceived him, he then ordered that Alexander and Asterius be whipped. They also confessed themselves Christians and glorified God. The prefect immediately gave orders to cut off their heads. Twice he attempted to carry out the execution, and to bore through the saint's knees, but the grace of God prevented him. Then he commanded that St Thallelaeus be drowned.

The returning servants reported to the prefect that they had carried out the execution, but just as they finished their report, St Thallelaeus appeared in white raiment. For a long time everyone was numbed with terror, but finally the prefect said, "Behold, this sorcerer has bewitched even the sea."

Then one of his advisers, the magician Urbician, told the prefect to have the martyr thrown to the wild beasts. But neither the vicious bear, not the hungry lion and lioness, would touch the saint, all meekly lay down at his feet. Seeing this happen, the people began to shout, "Great is the God of the Christians. O God of Thallelaeus, have mercy on us!"

The crowd seized Urbician and threw him to the beasts, which did not hesitate to tear the magician apart. Finally, the prefect gave orders to kill the holy martyr with a sword. They led Christ's martyr to the place of execution, called Aegea, where he prayed to God and bent his neck beneath the sword. This occurred in the year 284.

The relics of the holy martyr Thallelaeus are in the church of St Agathonicus of Constantinople and have performed many miracles. St Thallelaeus treated the sick without payment. For this reason, the Church calls him an Unmercenary Physician. He is invoked in prayers for the sick in the Mystery of Holy Unction, and during the Blessing of Waters." 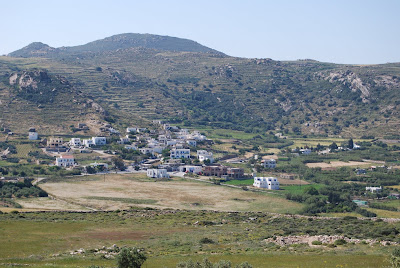 Picture of the village of Agios Thalelaios on the island of Naxos, Greece (taken from: http://3.bp.blogspot.com/_xIE6_e-O9X8/SgiCuecn-oI/AAAAAAAAAKc/suOzArqRfuU/s1600-h/DSC_0178.JPG)

St. Thallelaios is honored in many Orthodox locations throughout the world. One of these is the village named after him on the island of Naxos in Greece. This may be one of the reasons why St. Nikodemos of the Holy Mountain composed a full service of the Saint, in which St. Thallelaios is called "the protector of the island of Naxos", and where St. Nikodemos mentions that he works many miracles for those who flee to him for help (for the Greek text of the Service of St. Thallelaios, see: http://voutsinasilias.blogspot.com/2009/05/20.html). 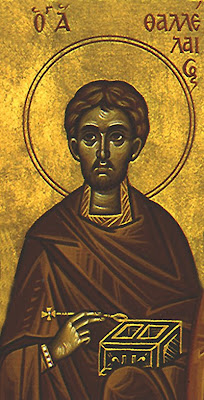 Kontakion in the Third Tone
With the Martyrs of the Lord thou didst contest and wast shown forth as a valiant soldier of the King of Glory, Who crowned thee for the harsh and bitter tortures that thou didst suffer, trampling down the pride of them that worshipped the idols. O Thalleleus, we therefore praise thine august and blessed remembrance today.
(taken from: http://goarch.org/chapel/saints_view?contentid=61)

Christ is risen from the dead, by death, trampling down upon death, and to those in the tombs, bestowing life!
Truly the Lord is risen!
Posted by Agioi_Anargyroi at 9:50 AM