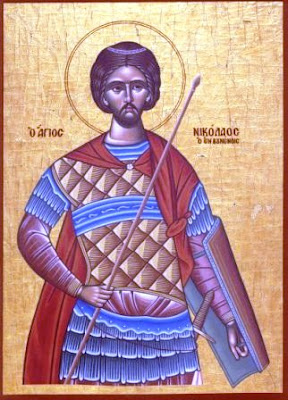 Icon of St. Nicholas the New Righteous Martyr of Vounena (taken from: http://www.synaxaristis.googlepages.com/9μαϊου)

"Life of St. Nicholas of Vounena - May 9th
The Righteous Martyr Nicholas the New was probably born in the land of Asia Minor. From a young age he was noted for his fervent faith, love for God and piety. Nicholas could not hide his virtue and valor. His reputation quickly exceeded the narrow limits of his homeland and spread to the Emperor in Constantinople. The Emperor in that time, Leo the Wise (886-912 AD), therefore requested Nicholas's services. After their first contact, Emperor Leo appointed him head of the imperial province of Larisa, and also appointed him guardian of the city of Thessalonica. Nicholas accepted the position, and over time his spirituality increased and he grew fondly in the hearts of his soldiers and all the inhabitants of Thessaly.

When the Avars invaded Thessaly, they caused much devestation and death. Nicholas with his armed forces tried to halt the enemy. However, because the Avars were in such great numbers, they succeeded to invade the land and conducted many massacres and much looting. Several of the residents fled to the city or the mountains. Nicholas and his soldiers retreated to the village called Vounena, where there existed several hermitages in the steep hills. He settled there with his soldiers, and they assumed a life of chastity and prayer. He and his soldiers lived the angelic life of monasticism. 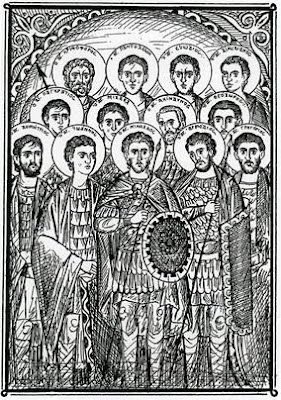 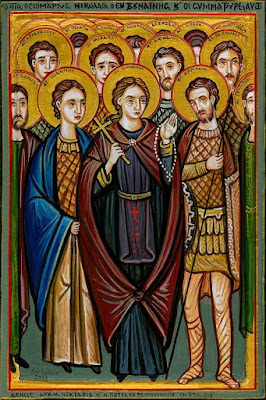 Another icon of St. Nicholas with his fellow soldiers (source)

One evening, while in prayer, the Angel of the Lord appeared and announced to Nicholas that his disciples would soon be martyred for Christ. Indeed, the enemies captured them, and submitted them to a multitude of torments. They urged them to abandon the faith and worship the Avar "gods," as well as swear their allegiance to the Avar chief. But they remained faithful to Christ and their names have thus been written in the Book of Life. The holy martyrs are known to be the monks Gregory, Demetrius, Evodius, Theodore, John, Michael, Pancratius, Panteleon, Christopher and Emilian, and the nuns Irene and Pelagia. 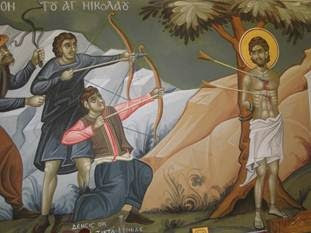 The Martyrdom of St. Nicholas of Vounena, the New (http://www.agiosnikolaosneos.gr/images/stories/clip_image020_b3eba28ae625bb8c8d193d01e3feb48f.jpg) 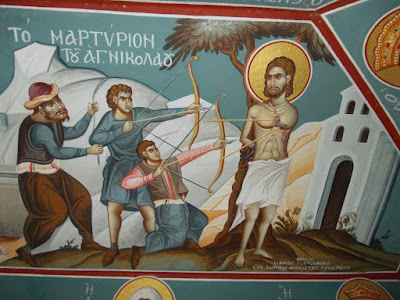 Another depiction of the Saint's Martyrdom for Christ (source)

Nicholas has himself escaped and continued his ascetic life, lodging in a cave which was covered by an oak tree. But soon he too was also captured and martyred for Christ. The barbarian invaders captured him and tortured him, attempting to convince him to deny the Faith. But he bravely resisted. He was tortured for ten days, until he received the crown of glory and entered into the choir of martyrs. 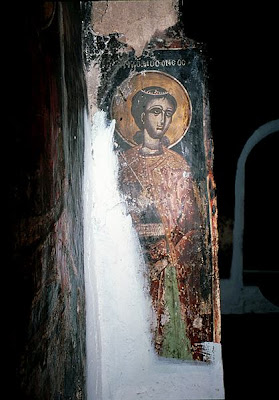 The Bishop of Larisa transferred his relics to the city of Tyrnabus. Years later, the Euphemian, the Duke of Thessalonica, discovered the relics. Euphemian suffered from the illness of leprosy. He searched for the treatments of doctors, but in vain. However, when he was visiting Larisa, he was advised to go to the place called Vounena for the feastday of St. Nicholas the New, and to witness the miracle of the blood that comes out of his cave of dwelling, out of the oak tree, and out of his grave, each year on his feastday. 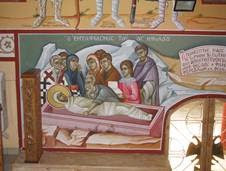 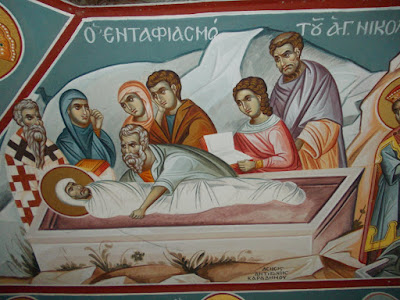 Another depiction of the Saint's burial (source)

Duke Euphemian went to Vounena, and anointed his body with the miraculously-appearing red liquid. He was immediately healed from leprosy, and glorified God who worked wonders through this holy saint. To thank the saint, he built a chapel dedicated to St. Nicholas, and placed the holy relics of St. Nicholas therein." The Holy Skull of St. Nicholas the New of Vounena is also treasured at the Monastery of St. Nicholas on Andros. (taken from: http://www.genuineorthodoxchurch.net/miraclevounena.html) 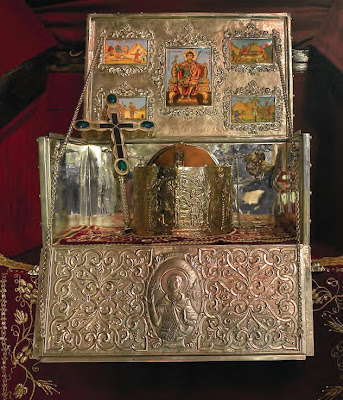 The Sacred Skull of St. Nicholas the New of Vounena, treasured by the Monastery of St. Nicholas, Andros (http://www.in-agiounikolaoutouneou.gr/assets/mymedia/1262799758_nfile2.pdf) 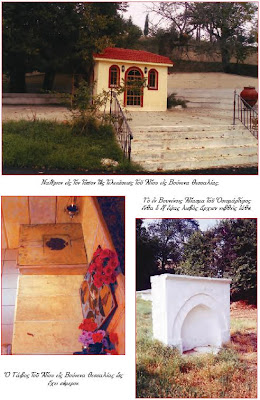 Top: Church at the Place of Martyrdom of St. Nicholas the New, Vounena, Thessaly; bottom left: the Tomb of the Saint; bottom right: agiasmo of the Saint (http://www.in-agiounikolaoutouneou.gr/assets/mymedia/1262799758_nfile2.pdf)

Every year on the Saint's feast day (May 9th) in Vounena, Thessaly, at the Church dedicated to him, at the Saint's grave and his place of martyrdom, a red-colored "blood" miraculously flows and is gathered by the faithful, causing many healings by the grace of Christ. I disagree with the source quoted above, however, as I've heard from numerous sources (e.g. http://www.agiooros.net/modules.php?name=Forums&file=viewtopic&t=5825) that this miracle (like many other miracles) occurs on both the New and the Old Calendar celebrations of St. Nicholas the New. 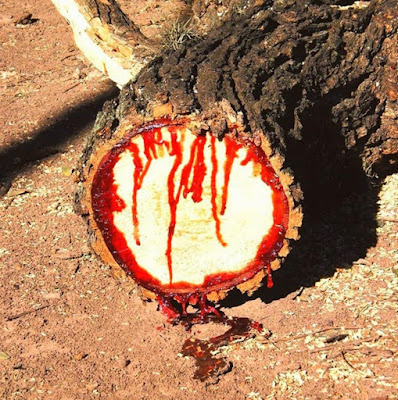 A picture of the tree pouring forth the wondrous "blood" on the feast of St. Nicholas the New at the place of his martyrdom (source)

May St. Nicholas the New intercede for all of us and help us!

Icon of St. Nicholas the New Osiomartyr of Vounena (Icon courtesy of www.eikonografos.com used with permission)

Apolytikion of St. Nicholas the New - 4th Tone (amateur translation)
As the free physician of the sick, and the impregnable help of those in dangers, the fervent protector of those in troubles, and the defender of those with all needs, O Righteous-martyr from the east Nicholas, intercede with Christ God to save our souls. 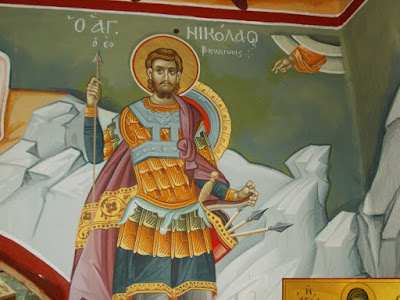 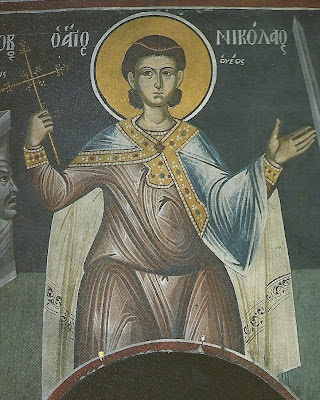 Christ is Risen from the dead, by death, trampling down upon death, and to those in the tombs, bestowing life!
Truly the Lord is risen!
Posted by Agioi_Anargyroi at 8:05 AM