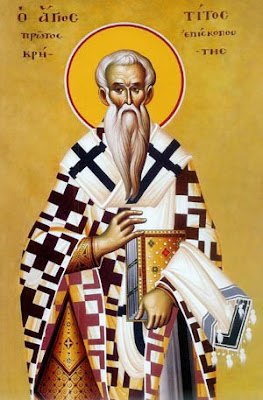 Icon of St. Titus the Apostle, the first bishop of Crete - Commemorated on August 25th (taken from: http://media.iak.gr/displayimage.php?album=6&pos=2)
"Titus was one of the Seventy [Apostles]. He was born in Crete and educated in Greek philosophy and poetry.

[Preoccupied by the sciences, Titus led a virtuous life, not devoting himself to the vices and passions characteristic of the majority of pagans. He preserved his virginity, as the Hieromartyr Ignatius the God-bearer (December 20) testifies of him. (http://ocafs.oca.org/FeastSaintsViewer.asp?SID=4&ID=1&FSID=102393)]

and doubted all the wisdom of the Hellenes. Hearing about Christ the Lord, Titus traveled to Jerusalem with other Cretans and personally heard the words of the Savior and witnessed His mighty works. His young heart completely adhered to Christ.

[He witnessed the suffering and death of the Savior on the Cross, His glorious Resurrection and Ascension to Heaven. On the day of Pentecost the future apostle heard how the Twelve Apostles, after the descent of the Holy Spirit, spoke in various languages, among which was the Cretan language (Acts 2: 11). (http://ocafs.oca.org/FeastSaintsViewer.asp?SID=4&ID=1&FSID=102393)]

Later, he was baptized by the Apostle Paul whom he served as a son to a father in the work of evangelization. Paul loved Titus so much that, at times, he referred to him as son: "To Titus, my beloved son" (Titus 1:4) and, at times, brother: "I urged Titus to go to you and I sent the other brother with him" (2 Corinthians 12:18). Titus traveled extensively with the great apostle of the people [St. Paul] and was appointed by him as the bishop of Crete. Titus was present at the suffering and death of Paul in Rome and honorably buried the body of his teacher and spiritual father. After that, Titus returned to Crete where, with great success, he baptized the pagans and prudently governed the Church of God until old age. Titus entered into rest at the age of ninety-four." (taken from: http://www.westsrbdio.org/prolog/prolog.htm)


[St Titus peacefully guided his flock and toiled at enlightening the pagans with the light of faith in Christ. He was granted the gift of wonderworking by the Lord. During one of the pagan feasts in honor of the goddess Diana, Titus preached to a crowd of pagans. When he saw that they would not listen to him, he prayed to the Lord, so that the Lord Himself would show to the mistaken people the falseness of idols. By the prayer of St Titus, the idol of Diana fell down and shattered before the eyes of all. Another time St Titus prayed that the Lord would not permit the completion of a temple of Zeus, and it collapsed. By such miracles St Titus brought many to faith in Christ...At the time of his death, his face shone like the sun. (http://ocafs.oca.org/FeastSaintsViewer.asp?SID=4&ID=1&FSID=102393)] 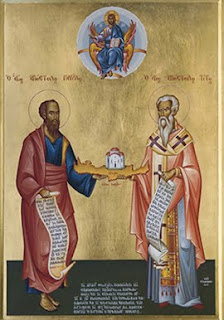 Icon depicting the Holy Apostles Paul and Titus, holding the island of Crete (taken from: http://www.imga.gr/apostolos_pavlos.htm) 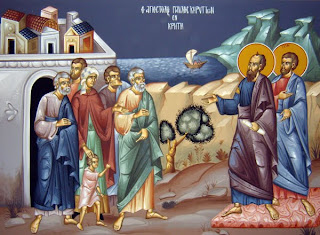 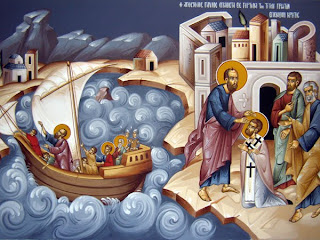 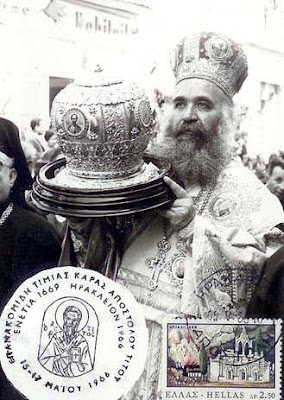 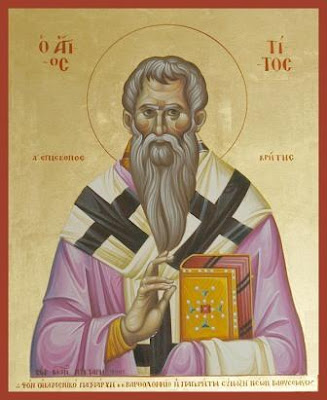 
Apolytikion in the Third ToneO Holy Apostles, intercede to our merciful God, that He may grant our souls forgiveness of sins.
Kontakion for St. Titus the Apostle in the Second ToneO yoke-mate of Paul, together with him, thou didst preach the tidings to us of saving grace bestowed of God, O Apostle Titus, blest and elect revealer of mysteries; for which cause we cry out to thee: Cease not to entreat Christ God for all of us.
(taken from: http://goarch.org/chapel/saints_view?contentid=177 and http://goarch.org/chapel/saints_view?contentid=178)
Through the prayers of our Holy Fathers, Lord Jesus Christ our God, have mercy on us and save us! Amen!
Posted by Agioi_Anargyroi at 11:01 AM