Sts. Florus and Laurus the Martyrs of Illyria 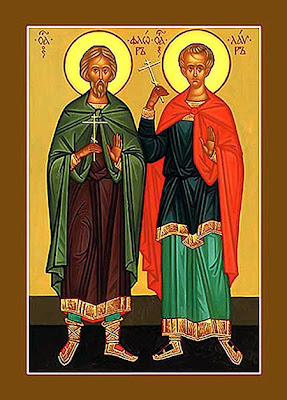 Sts. Florus and Laurus the Martyrs of Illyria - Commemorated on August 18 (taken from: http://ocafs.oca.org/FeastSaintsViewer.asp?SID=4&ID=1&FSID=102325)
+
"The Martyrs Florus and Laurus were brothers by birth not only in flesh but in spirit. They lived in the second century at Byzantium, and afterwards they settled in Illyria [now Yugoslavia]. By occupation they were stone-masons (their teachers in this craft were the Christians Proclus and Maximus, from whom also the brothers learned about life pleasing to God).
The prefect of Illyria, Likaion, sent the brothers to a nearby district for work on the construction of a pagan temple. The saints toiled at the structure, distributing to the poor the money they earned, while they kept strict fast and prayed without ceasing.
Once, the son of the local pagan-priest Mamertin carelessly approached the structure, and a chip of stone hit him in the eye, severely injuring him. Sts Florus and Laurus assured the upset father, that his son would be healed.
They brought the youth to consciousness and told him to have faith in Christ. After this, as the youth confessed Jesus Christ as the true God, the brothers prayed for him, and the eye was healed. In view of such a miracle, even the father of the youth believed in Christ.
When the construction of the temple was completed, the brothers gathered the Christians together, and going through the temple, they smashed the idols. In the eastern part of the temple they set up the holy Cross. They spent all night in prayer, illumined with heavenly light. Having learned of this, the head of the district condemned to burning the former pagan priest Mamertin and his son and 300 Christians.
The martyrs Florus and Laurus, having been sent back to the prefect Likaion, were thrown down an empty well and covered over with earth. After many years, the relics of the holy martyrs were uncovered incorrupt, and transferred to Constantinople. In the year 1200 the Novgorod pilgrim Anthony saw them. Stephen of Novgorod saw the heads of the martyrs in the Pantokrator monastery around the year 1350."
(taken from: http://ocafs.oca.org/FeastSaintsViewer.asp?SID=4&ID=1&FSID=102325)

The Holy Archangel Michael returning the horses of Sts. Florus and Laurus, and Sts. Elashippus, Speushippus & Melashippus (taken from: http://www.mmartltd.com/galleryimage.php?iid=303)
The following is the relationship between Sts. Florus and Laurus and horses:
"One day their horses were lost. The two brothers appealed to the Archangel Michael to help them recover the runaway horses. [Archangel] Michael helped them recover the horses and the two decided to dedicate their lives to horses and they in turn become the patron saints of horses in Russia. These two saints are much beloved even today in the Russian Orthodox Church." (taken from: http://www.mmartltd.com/galleryimage.php?iid=303)
"[Sts.] Elashippus, Speushippus & Melashippus [celebrated January 16th and also depicted on the lower portion of the above icon] were Cappadocian brothers, two of them twins, who were grooms and horse doctors, who had learned their skills from Ss. Florus & Laurus and the Archangel Michael. These three were also martyred for their faith. Laurus & Florus suffered in the early 2nd Century. On their feast day, it has been the custom to drive all of the horses down to a river or pond, after liturgy. Then a molebin is held, the waters are blessed and the horses are bathed. It is a day of rest for horses. Michael is particularly known for the protection of horses & cattle. Thus, he is at the top of the icon conveying blessing on all surrounding." (taken from: http://www.comeandseeicons.com/groups/pdr24.htm) 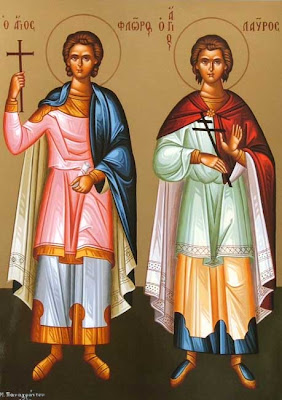 Icon of Sts. Florus and Laurus (taken from: http://christopherklitou.com/icon_18_aug_florus_laurus.htm)
Troparion - Tone 4
Let us praise as is meet, O you faithful, The most comely, radiant and divinely wise martyrs: Most blessed Florus and all venerable Laurus, Who proclaimed to all the uncreated Trinity. Suffering unto bloodshed, They were adorned with brilliant crowns. Entreat Christ our God to save our souls.
Kontakion - Tone 8
Today all the world honors in glory the divinely wise Florus and Laurus, As pious martyrs who suffered for Christ. Through their prayers may we receive grace and mercy And be delivered from calamity and temptation, And from wrath and sorrow on the Day of Judgment.
(taken from: http://molonlabe70.blogspot.com/2008/08/martyrs-florus-and-laurus-of-illyria.html)
+
Through the prayers of our Holy Fathers, Lord Jesus Christ our God, have mercy on us and save us! Amen!
Posted by Agioi_Anargyroi at 2:05 PM