The first visit of the Theotokos to Mount Athos 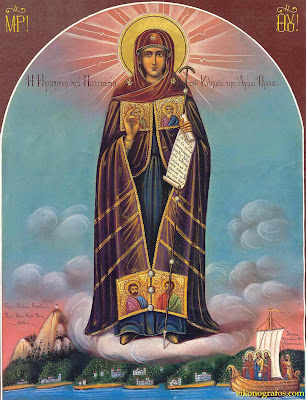 The Theotokos as the Abbess of the Holy Mountain, depicted also reaching Athos by boat with St. John and others (Icon courtesy of www.eikonografos.com used with permission)
The first visit of the Theotokos to Mount Athos (amateur translation)
When God's Mother ascended to the Mount of Olives to pray, the trees bent to venerate her. According to the general hagiorite tradition, the Lady Theotokos with St. John the Theologian were traveling by boat from Palestine to Cyprus to visit St. Lazarus (who was raised from the dead by Christ). Because of a great storm and in a supernatural manner, however, the boat reached Athos and specifically the bay of Klementos in the Monastery of Iveron.

There the inhabitants of Athos, led by divine Providence, hastened to receive the mother of our Lord, Panagia, and having heard her teaching, they accepted Christianity. It is further said by tradition that when the boat of the Panagia approached the Holy Mountain, the large statue of Dios at the summit of the Mountain was destroyed, and the remaining idols were crushed. The peak of Athos and all the trees and the houses bent to venerate towards the place of the bay of Klementos where Panagia's boat was coming.

The arrival of the Theotokos at the Mountain is mentioned by codices L' 66 and I' 31 of the Library of Great Lavra Monastery. 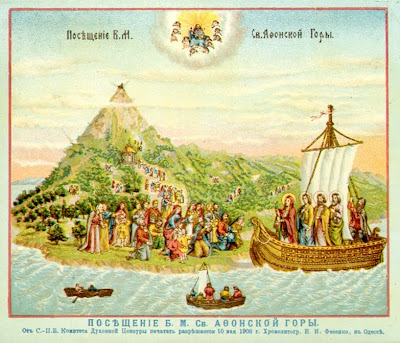 The Theotokos, St. John and others approaching Mount Athos by boat (http://kelliakalives.pblogs.gr/files/f/343630-10.jpg)
When the apostles cast lots for the regions where they would preach, Panagia sought to take a lot to preach the Gospel. Her lot showed the region of Iberia. The archangel Gabriel however appeared and said to the Virgin that her true region would be Macedonia and the Mount of Athos. When their boat entered the bay, there was great turmoil on the Mountain, and then the inhabitants came and asked John how all of these things happened, and with which power. And he explained to them and preached the word of God, speaking in Greek, though he was a Hebrew.

Panagia, pleased by the beauty of the Mountain and the share that she was granted, prayed to Christ saying:
“My Son and my God, bless this place and my share. And pour forth upon it your mercy and preserve it unharmed until the close of this age. And those who dwell in it, through Your Holy name and Mine, who through a small effort and struggle of repentance, are granted remission of their sins. Fill them with every good and necessary thing in this age, and grant them eternal life in the age to come. Glorify this place above all others, and miraculously and utterly fill it from all nations under Heaven, who are called by Your name, and enlarge their dwellings from one end to the other. Deliver them from eternal damnation, and save them from every temptation, from visible and invisible foes and from every heresy, and give peace to the orthodox dogma.”

Then she heard a voice from the Heavens that said:

Icon of the Theotokos as the Abbess of the Holy Mountain (http://vatopaidi.files.wordpress.com/2010/08/theotokos.jpg)
Theotokion from the First Ode of the Canon of the Athonite Fathers
When God apportioned the nations according to his Angels, knowing that you, O Virgin, would be his immaculate Mother, he then allotted you this great and beautiful mountain as an inalienable inheritance.
(http://anastasis.org.uk/athoscan.htm)

Most-Holy Theotokos, save us!
Posted by Agioi_Anargyroi at 3:45 PM