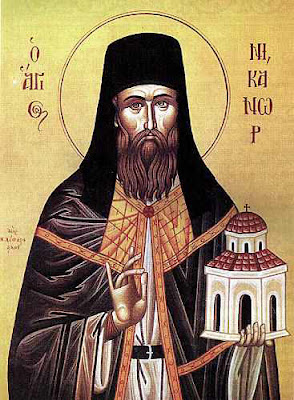 St. Nikanor the Wonderworker of Mount Kallistratos - Commemorated on August 7th (http://4.bp.blogspot.com/_GcLAjo-5_CM/SnrgN0tgAFI/AAAAAAAAHSw/8ErbnriuFPo/s1600-h/AgiosNikanor01.jpg)
The Righteous Nikanor was born in 1491 in Thessaloniki of wealthy parents, John and Maria, who had great difficulty having children. Their faith however, displayed by their prayers and good deeds, helped them after years bear a son named Nicholas (the baptismal name of the Saint). His parents from the beginning tried raise him according to the teachings of the Gospel. When Nicholas was 20 years old, his father died, and after a short time, so did his mother.

When his parents died, the Righteous Nikanor found himself the inheritor of a great inheritance. Most especially, however, he gained the Church from his parents. One night as he was praying, he heard a heavenly voice tell him: “Go to Mount Kallistratos, to struggle well there.”

Having distributed his inheritance to the poor, he began he left for his destination together with the Righteous Dionysios of Olympus. (http://full-of-grace-and-truth.blogspot.com/2010/01/st-dionysios-righteous-of-olympus-and.html) During the journey they roads separated, and the Righteous Nikanor alone reached Mount Kallistratos (known as Vermion Mountain, Grevena), where with much effort he built his ascetical dwelling in the Monastery that was there, and which survives to this day, in the treacherous canyon rocks, on the banks of the Aliakmona river. Besides all of this, he would routinely descend to strengthen the faithful of the surrounding towns and villages, to remain steadfast in their faith, even to end of sacrificing their lives.

One night when he was praying, he again heard a heavenly voice, which called him to go to the summit of the mountain to find the icon of the Savior, which was hidden during the time of the iconoclasts, and to built in that place a monastery. In reality, the next day, that which was said by the voice was verified, and Nikanor at that place built a church and monastery in the name of the Transfiguration of the Lord. 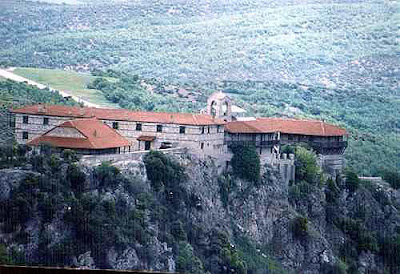 The Monastery of St. Nikanor (http://www.pigizois.net/ieres_mones/i_m_ag_nikanora/02.jpg)
The contribution of the monastery was invaluable during the struggles for independence of Greece, both because of its strategic location, and also its economical support.
St. Nikanor fell asleep in the Lord on August 7th 1549, at the age of 58. His sacred relic was buried in the Chapel of the Precious Forerunner.
The Monastery of Zavordas was known for its hospitality, and many would come from Grevena, Siatista, Kozani, Serbia, Deskate and other cities in the region of Western Macedonia. This tradition was sacred since the age when the Righteous Nikanor lived. Throughout all his years of service, those who would visit the monastery would always find a plate of food and a glass of wine, from the large stores that existed there.
The contribution of the Righteous one was invaluable, both in life and after his repose, as faith in him and the church has shone a great host of miracles up to today, especially regarding healings of plagues and diseases [Another source mentions that the Saint is a protector of shepherds and animals].
(amateur translation of the Greek text from: http://www.xfe.gr/modules.php?file=article&name=News&sid=427)
For a video of the Monastery of St. Nikanor, see: http://www.pigizois.net/arxeia/nikanoras.wmv. 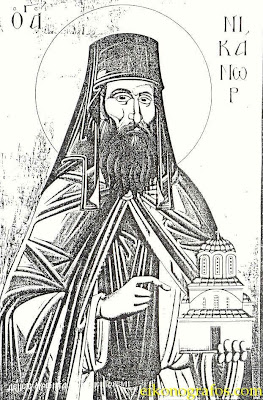 St. Nikanor the Wonderworker of Mount Kallistratos (Icon courtesy of www.eikonografos.com used with permission)
Apolytikion of St. Nikanor the Wonderworker in the Fourth Tone (amateur translation)
As an Angel in the flesh you lived on earth, and received the crown of victory in the heavens from God, O Righteous one, therefore receiving of the grace of miracles, you ever grant deliverance, O God-bearing Nikanor, to those who hasten to your divine intercessions in faith.
(http://www.xfe.gr/modules.php?file=article&name=News&sid=427)
The full service of the Saint in Greek is available here: http://analogion.com/forum/showthread.php?t=10467.

Through the prayers of our Holy Fathers, Lord Jesus Christ our God, have mercy on us and save us! Amen!
Posted by Agioi_Anargyroi at 7:25 AM