St. Abramius the Righteous Wonderworker of Smolensk (+1220) - Commemorated on August 21 (http://days.pravoslavie.ru/Images/ii40&1623.htm)
"The Monk Avraamii (Abraham) of Smolensk, a preacher of repentance and the impending Dread Last Judgement, was born in the mid-XII Century at Smolensk of rich parents, who before him had 12 daughters, and they besought God for a son. From childhood he grew up in the fear of God, he was often in church and had the opportunity to read books. The parents hoped that their only son would enter into marriage and continue their illustrious lineage, but he sought after a different life. After the death of his parents, having given away all his wealth to monasteries, to churches and to the destitute, the saint walked through the city in rags, beseeching God to show him the way to salvation.

He accepted tonsure in a monastery of the MostHoly Mother of God, five versts from Smolensk, at the locale of Selischa. Having passed through various obediences there, the monk fervently occupied himself with the copying of books, culling spiritual riches from them. The Smolensk prince Roman Rostislavich (+ 1170) started a school in the city, in which they taught not only in Slavonic, but also out of Greek and Latin books. The prince himself had a large collection of books, which the Monk Avraamii made use of. He had asceticised for more than 30 years at the monastery, when in the year 1198 the hegumen persuaded him to accept the dignity of presbyter. Every day he made Divine Liturgy and fulfilled the obedience of clergy not only for the brethren, but also for the laypeople.

Soon the monk became widely known. This aroused the envy of the brethren, and then of the hegumen also, and 5 years later the monk was compelled to transfer to the Cross-Exaltation monastery in Smolensk itself. From the offerings by the devout he embellished the cathedral church of the poor monastery with icons, and with curtains and candle-stands. He himself inscribed two icons on themes, which most of all concerned him: on the one he depicted the Dread Last Judgement, and on the other – the suffering of the trials of life. Lean and pale from extreme toil, the ascetic in priestly garb resembled in appearance Saint Basil the Great. The saint was strict both towards himself, and towards his spiritual children. He preached constantly in church and to those coming to him in his cell, conversing with rich and poor alike.

The city notables and the clergy demanded of Bishop Ignatii to bring the monk to trial, accusing him in the seduction of women and the tempting of his spiritual children. But even more terrible were the accusations against him, of heresy and the reading of forbidden books. For this they proposed to drown or burn the ascetic. At the trial by the prince and the bishop, the monk answered all the false accusations, but despite this, they forbade him to serve as a priest and returned him to his former monastery in honour of the MostHoly Mother of God. A terrible drought occurred in consequence of God's wrath over the unjust sentence, and only when Sainted Ignatii put forth a pardon of the Monk Avraamii permitting him to serve and preach, did the rain again fall on the Smolensk lands.

The bishop Saint Ignatii built a new monastery, in honour of the Placing of the Robe of the MostHoly Mother of God, and he entrusted the guidance of it to the Monk Avraamii, and he himself settled into it, having retired because of age from the diocese. Many were desirous to enter under the guidance of the Monk Avraamii, but he examined them very intensely and only after great investigation, so that at his monastery there were but 17 brethren. The Monk Avraamii, after the death of Saint Ignatii, having become his spiritual friend, – even moreso than before urged the brethren to reminisce about death and to pray day and night, that they be not condemned in the Judgement by God.

The Monk Avraamii died after the year 1224, having spent 50 years in monasticism. Already at the end of the XIII Century there had been compiled a service to him, conjointly with his student the Monk Ephrem. The terrible Mongol-Tatar invasion, seen as the wrath of God for sin, not only did not stifle the memory of the Monk Avraamii of Smolensk, but rather was a reminder to people of his calling to repentance and recollection of the dread Last Judgement."
(© 1996-2001 by translator Fr. S. Janos; http://www.holytrinityorthodox.com/calendar/los/August/21-03.htm)

"Magnanimous forgiveness of slanderers and prayer for them is a characteristic of Christian saints who do not ascribe all the slanders against themselves to men but rather to demons, the main instigators of every slander as well as every sin in general. St. Abraham of Smolensk was slandered by envious priests to the prince and the bishop as a deceiver, magician and hypocrite. The slanders sought nothing less than to have him burned. The prince and the bishop believed the slanderers and Abraham was banished from Smolensk and was forbidden to exercise his priestly functions. During the entire time of his investigation and trial, Abraham repeated the prayer of St. Stephen, the first martyr: "Lord, lay not this sin to their charge" (Acts of the Apostles 7:60). Later it was established that all of the accusers against Abraham lied and slandered. The infuriated prince wanted to severely punish the slanderers and the bishop wanted to excommunicate them from the Church but the holy Abraham fell on his knees before the bishop and, with tears, begged him to forgive them. Abraham did not want to return to his monastery nor to begin again to exercise his priestly functions until his slanderers were shown mercy and released."
(http://www.westsrbdio.org/prolog/prolog.htm)


HYMN OF PRAISE
VENERABLE ABRAHAM OF SMOLENSK
by St. Nikolai Velimirovitch
The candle burns and incense smells,
Day and night, Abraham prays
His neighbors, he loves as himself.
Withered body of St. Abraham
From fasting and prostrations,
Heart trembling, from the Name of God -
On the pages of time, eternity he writes
Of the sinner, sinners are not afraid
But, the righteous ones, they bitterly fear,
Sinful men, Abraham mock
Envious ones, Abraham accuse.
Mocked and accused, Abraham endures,
For his foes, the mercy of God he implores.
Abraham his heart conceals
Secretly kneeling, secretly shedding tears;
God does not judge as men judge,
The judgment of man desires to harm
But God desires salvation for all,
The aristocrat and the helpless slave.
In God, the saint places all his hope
Abraham, God eternally glorified.
(http://www.westsrbdio.org/prolog/prolog.htm) 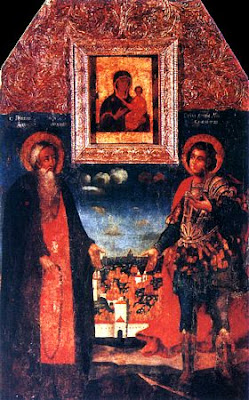 Sts. Abramius and Mercurius of Smolensk (http://days.pravoslavie.ru/Images/ii40&954.htm)
Apolytikion in the Plagal of the Fourth Tone
The image of God, was faithfully preserved in you, O Father. For you took up the Cross and followed Christ. By Your actions you taught us to look beyond the flesh for it passes, rather to be concerned about the soul which is immortal. Wherefore, O Holy Abramius, your soul rejoices with the angels.
(alterred from: http://goarch.org/chapel/saints_view?contentid=225&type=saints)
Through the prayers of our Holy Fathers, Lord Jesus Christ our God, have mercy on us and save us! Amen!
Posted by Agioi_Anargyroi at 3:21 AM

Labels: Forgiveness, Lives of the Saints