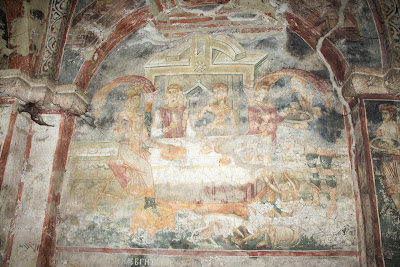 The Rich Man at banquet, and the poor Lazarus, whose sores are being licked by the dogs (http://www.srpskoblago.org/Archives/Decani/exhibits/Collections/PublicMinistry/CX4K2408_l.html)

Selected Quotes of the Fathers on the Parable of the Rich Man and Lazarus (Luke 16:19-31)
"We must observe also, that among the heathen the names of poor men are more likely to be known than of rich. Now our Lord mentions the name of the poor, but not the name of the rich, because God knows and approves the humble, but not the proud."
St Gregory the Great, Pope of Rome

"Lazarus is interpreted, "one who was assisted." For he was poor, and the Lord helped him.
St John Chrysostom

"This discourse concerning the rich man and Lazarus was written after the manner of a comparison in a parable, to declare that they who abound in earthly riches, unless they will relieve the necessities of the poor, shall meet with a heavy condemnation. But the tradition of the Jews relates that there was at that time in Jerusalem a certain Lazarus who was afflicted with extreme poverty and sickness, whom our Lord remembering, introduces him into the example for the sake of adding greater point to His words."
St Cyril of Jerusalem

But the insolence and pride of the wealthy is manifested afterwards by the clearest tokens, for it follows, and no one gave to him. For so unmindful are they of the condition of mankind, that as if placed above nature they derive from the wretchedness of the poor an incitement to their own pleasure, they laugh at the destitute, they mock the needy, and rob those whom they ought to pity."
St Ambrose, Bishop of Milan 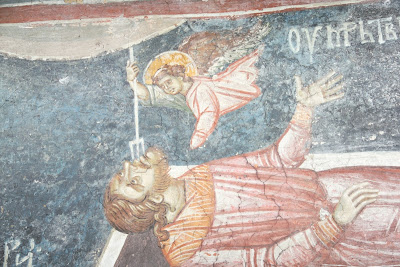 The death of the Rich Man (http://www.srpskoblago.org/Archives/Decani/exhibits/Collections/PublicMinistry/CX4K2416_l.html)

"Now if the wearing of fine and precious robes were not a fault, word of God would never have so carefully expressed this. For no one seeks costly garments except for vainglory, that he may seem more honorable than others; for no one wishes to be clothed with such, where he cannot be seen by others."

"And here we must narrowly watch ourselves, seeing that banquets can scarcely be celebrated blamelessly, for almost always luxury accompanies feasting; and when the body is swallowed up in the delight of refreshing itself, the heart relaxes to empty joys."

"But what means it, that when in torments he desires his tongue to be cooled, except that at his feasts having sinned in talking, now by the justice of retribution, his tongue was in fierce flame; for talkativeness is generally rife at the banquet. "
St. Gregory the Great, Pope of Rome 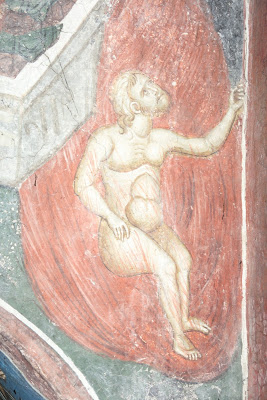 The Rich Man in the flame of Hades (http://www.srpskoblago.org/Archives/Decani/exhibits/Collections/PublicMinistry/CX4K2418_l.html)

"It may here be observed, that all who are offended by us are exposed to our view. But the rich man sees Lazarus not with any other righteous man, but in Abraham's bosom. For Abraham was full of love, but the man is convicted of cruelty. Abraham sitting before his door followed after those that passed by, and brought them into his house, the other turned away even them that abode within his gate."

"He [the rich man] died then indeed in body, but his soul was dead before. For he did none of the works of the soul. All that warmth which issues from the love of our neighbor had fled, and he was more dead than his body. But no one is spoken of as having ministered to the rich man's burial as to that of Lazarus. Because when he lived pleasantly in the broad road, he had many busy flatterers; when he came to his end, all forsook him. For it simply follows, and was buried in hell. But his soul also when living was buried, enshrined in its body as it were in a tomb."
St John Chrysostom 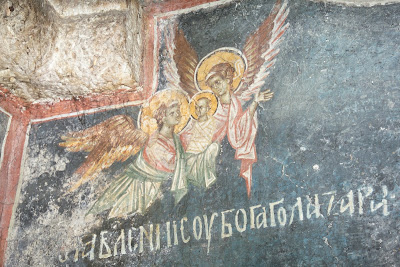 The soul of Lazarus being carried by Angels (http://www.srpskoblago.org/Archives/Decani/exhibits/Collections/PublicMinistry/CX4K2417_l.html)

"And here we must remark what fearful sufferings are heaped upon the rich man in flames. For in addition to his punishment, his knowledge and memory are preserved. He knew Lazarus whom he despised, he remembered his brethren whom he left. For that sinners in punishment may be still more punished, they both see the glory of those whom they had despised, and are harassed about the punishment of those whom they have unprofitably loved."
St Gregory the Great, Pope of Rome

"All this then is said to Him because he chose the happiness of the world, and loved no other life but that in which he proudly boasted; but he says, Lazarus received evil things, because he knew that the perishableness of this life, its labors, sorrows, and sickness, are the penalty of sin, for we all die in Adam who by transgression was made liable to death."
Blessed Augustine

"He says, You received good things in your life, (as if your due;) as though he said, If you have done any good thing for which a reward might be due, you have received all things in that world, living luxuriously, abounding in riches, enjoying the pleasure of prosperous undertakings; but he if he committed any evil has received all, afflicted with poverty, hunger, and the depths of wretchedness. And each of you came hither naked; Lazarus indeed of sin, wherefore he receives his consolation; you of righteous wherefore you endure your inconsolable punishment; and hence it follows, But now he is comforted, and you are tormented. "
St John Chrysostom

"Whatsoever then you have well in this world, when you recollect to have done any thing good, be very fearful about it, lest the prosperity granted you be your recompense for the same good. And when you behold poor men doing any thing blameably, fear not, seeing that perhaps those whom the remains of the slightest iniquity defiles, the fire of honesty cleanses."

"Whom does this rich man represent, this man so richly dressed, who enjoyed all those daily banquets? Is it not the Jewish people [or in another sense, hypocritical, false "Christians", for that matter], who made a cult of exterior things, using the delights of the law which they had received, for vain motives, not for true profit? And whom does Lazarus signify, covered in wounds, if not the Gentile peoples? These, when converted to God, were not ashamed to confess their sins, that is to say, they had many wounds and open sores. As when some infection comes from within the body to ulcers of the skin, so showing itself exteriorly, so when we confess our sins, it is in a sense an outbreak of our sores. In confession we manifest in a very profitable way the virus of sin which had concealed its venom within the soul. Exterior wounds bring to the surface the festering sore beneath, and when we confess our sins, we uncover this hidden sore. But the unfortunate Lazarus wished only to eat of the crumbs that fell from the rich man's table, and no one would give him any, because those proud people disdained to admit the Gentiles to the knowledge of their law.
St. Gregory the great, Pope of Rome 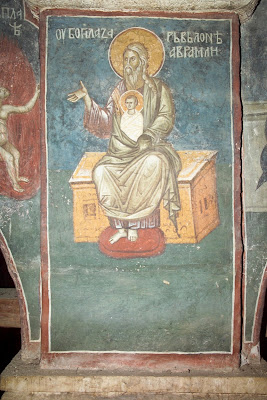 Lazarus' soul in the Boosm of the Patriarch Abraham (http://www.srpskoblago.org/Archives/Decani/exhibits/Collections/PublicMinistry/CX4K2419_l.html) 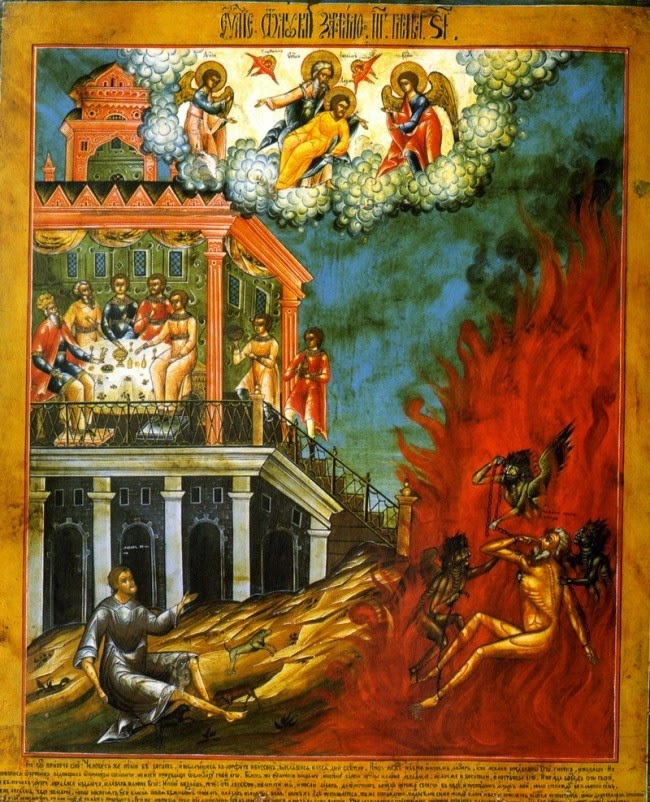 
Through the prayers of our Holy Fathers, Lord Jesus Christ our God, have mercy on us and save us! Amen!
Posted by Agioi_Anargyroi at 5:28 PM