St. Sampson the Innkeeper and Unmercenary 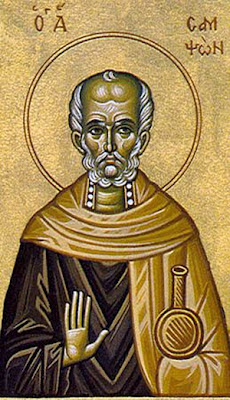 Saint Sampson the Hospitable was the son of rich and illustrious Roman parents. In his youth he received an excellent education, he studied the medical arts, and doctored the sick without charge. After the death of his parents St Sampson generously distributed alms and set his slaves free, preparing himself to go into the wilderness.

With this intent in mind he soon journeyed from Rome to the East. But the Lord directed him onto a different path, that of service to neighbor, and so St Sampson came to Constantinople. Settling into a small house, the saint began to take in homeless wanderers, the poor and the sick, and he attended to them. The Lord blessed the efforts of St Sampson and endowed him with the power of wonderworking. He healed the sick not only through being a skilled physician, but also as a bearer of the grace of God. [St. Sampson is numbered with the Holy Unmercenary Saints.] News of St Sampson spread abroad. The patriarch heard of his great virtue and ordained him to the holy priesthood.

It was revealed to the grievously ill Emperor Justinian (527-565), that he could receive healing only through St Sampson. In praying, the saint put his hand on the afflicted area, and Justinian was healed. In gratitude the emperor wanted to reward his healer with silver and gold, but the saint refused and instead asked Justinian to build a home for the poor and the sick. The emperor readily fulfilled his request.

St Sampson devoted the rest of his life to serving his neighbor. He survived into old age and after a short illness he departed peacefully to the Lord. The saint was buried at the church of the holy Martyr Mocius, and many healings were effected at his grave. His hospice remained open, and the saint did not cease to care for the suffering. He appeared twice to a negligent worker of the hospice and upbraided him for his laziness. At the request of an admirer of St Sampson the hospice was transformed into a church, and beside it a new edifice was built for the homeless. During the time of a powerful fire at Constantinople the flames did not touch the hospice of St Sampson. Through his intercession a heavy rain quenched the fire.
(http://oca.org/FeastSaintsViewer.asp?SID=4&ID=1&FSID=101828) 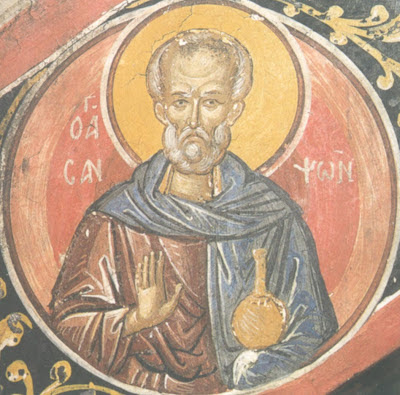 
Troparion - Tone 8
Through your patience, your unceasing prayer, your love for the poor and the help you gave to them, you became worthy of your reward, O holy Sampson. Intercede with Christ God that He may save our souls.

Kontakion - Tone 8
We honor your relics, for you are an excellent physician and powerful intercessor; as we gather to praise you with psalms and hymns, divinely-wise and venerable Sampson, we glorify Christ, who granted you the grace of healing.
(http://oca.org/FStropars.asp?SID=13&ID=101828) 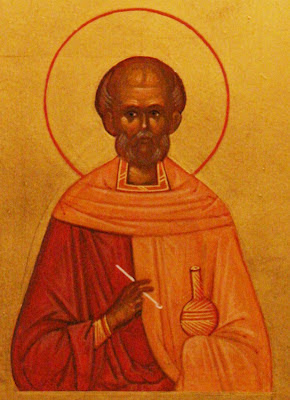 
Through the prayers of our Holy Fathers, Lord Jesus Christ our God, have mercy on us and save us! Amen!
Posted by Agioi_Anargyroi at 4:11 PM