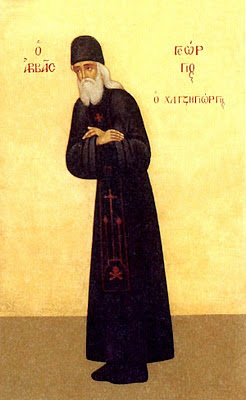 This great, yet previously little-known Elder of the Holy Mountain, was brought to light by St. Paisios, in his book on his life: Elder Hadji-Georgis the Athonite, translated into English and published in 1996 by Holy Monastery "Evangelist John the Theologian", Souroti, Thessaloniki, Greece.

The Elder's life is truly incredible, and worth reading. From his youth, he served Christ, and experienced countless wonders. He lived as a very strict ascetic on Mount Athos, and serves as a great example for monastics and laity. As Elder Paisios writes: "It does not matter that the Church has not [officially] proclaimed him a Saint, in order to give him a halo. That which has great significance is the radiant life of the Elder, his simple and innocent and silent example. He was full of virtue and Divine powers, which he possessed within himself in order to help his fellow men. He preached Christ, even from afar. He worked wonders, he saw divine visions, and had the gift of clairvoiyance. He had much grace from God, which did not abandon him! When the uncovering of his Holy Relics occurred, an unspeakable fragrance permeated from the Relics."
(source)

May we all have his blessing! 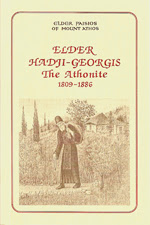 
Through the prayers of our Holy Fathers, Lord Jesus Christ our God, have mercy on us and save us! Amen!
Posted by Agioi_Anargyroi at 10:23 AM