St. Dionysios of Zakynthos, the Bishop of Aegina 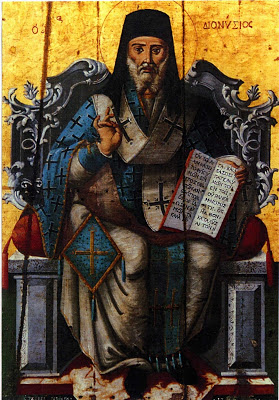 St. Dionysios of Zakynthos, the Bishop of Aegina - Commemorated December 17 (his repose) and August 24 (the transfer of his Relics) (source)

For a fuller life of this great Saint, see: http://www.johnsanidopoulos.com/2009/12/saint-dionysios-of-zakynthos-1.html.

Saint Dionysius of Zakynthos, the Bishop of Aegina was born in 1547 on the island of Zakynthos. Though born into a noble family, he was determined to flee the world and set his mind upon heavenly things. He entered the monastery of Strophada, and after the prescribed time, he was clothed in the angelic schema by the abbot. Though young in years, he surpassed many of his elders in virtue, and was found worthy of ordination to the holy priesthood.

Although he protested his unworthiness, St Dionysius was consecrated Bishop of Aegina. In that office he never ceased to teach and admonish his flock, and many were drawn to him in order to profit from his wisdom. He feared the praise of men, lest he should fall into the sin of vainglory, so he resigned his See and returned to Zakynthos.

In 1579 the diocese of Zakynthos was widowed (when a bishop dies, his diocese is described as "widowed"), and Dionysius agreed to care for it until a new bishop could be elected. Then he fled from the worldly life which gave him no peace, and went to the Monastery of the Most Holy Theotokos Anaphonitria, twenty miles from the main village.

A certain stranger murdered the saint's brother Constantine, an illustrious nobleman. Fearing his victim's relatives, the stranger, by chance or by God's will, sought refuge in the monastery where St Dionysius was the abbot. When the saint asked the fugitive why he was so frightened, he confessed his sin and revealed the name of the man he had murdered, asking to be protected from the family's vengeance. St Dionysius wept for his only brother, as was natural. Then he comforted the murderer and hid him, showing him great compassion and love.

Soon the saint's relatives came to the monastery with a group of armed men and told him what had happened. He pretended to know nothing about it. After weeping with them and trying to console them, he sent them off in the wrong direction. Then he told the murderer that he was the brother of the man he had killed. He admonished him as a father, and brought him to repentance. After forgiving him, St Dionysius brought him down to the shore and helped him to escape to another place in order to save his life. Because of the saint's Christ-like virtue, he was granted the gift of working miracles. 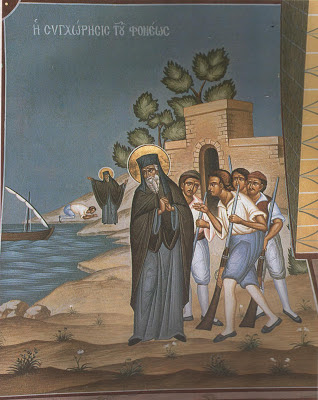 Having passed his life in holiness, St Dionysius reached a great age, then departed to the Lord on December 17, 1624. 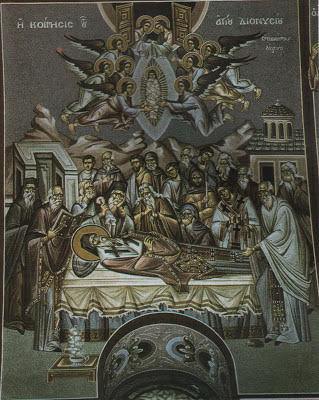 The dormition of St. Dionysios of Zakynthos (source)

Not only are the saint's relics incorrupt, but he is also one of Greece's "walking saints" (St Gerasimus and St Spyridon are the others). He is said to leave his reliquary and walk about performing miracles for those who seek his aid. In fact, the soles of his slippers wear out and must be replaced with a new pair from time to time. The old slippers are cut up, and the pieces are distributed to pilgims. On August 24, we celebrate the Transfer of his Holy Relics. Through the prayers of Saint Dionysius, may Christ our God have mercy upon us and save us.
(source) 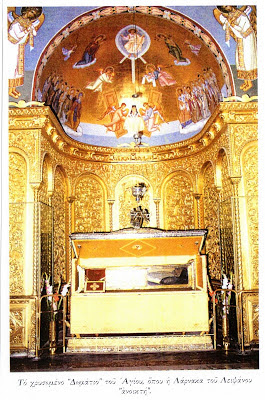 The holy, incorrupt and wonderworking Relic of St. Dionysios of Zakynthos (source)


Through the prayers of our Holy Fathers, Lord Jesus Christ our God, have mercy on us and save us! Amen!
Posted by Agioi_Anargyroi at 1:30 AM

Labels: Forgiveness, Lives of the Saints, St. Dionysios of Zakynthos