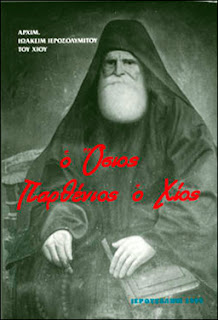 Desiring to behold his dead fiancee with his own eyes (when he was a young man), he went to the tomb at night, uncovered her, and took her in his arms. He philosophized, as is said in the hymns from the Funeral Service: “We went out and saw in the tombs that the naked bones of man are worms and filth and stench”, and without telling anyone, he left the cares of this vain world, and became a monk in Nea Moni of Chios, and was noted for his ascetical feats.

With the blessing of his elder, he ascended the peak of Mount Penthodous, and lit the vigil lamp, and cared in general for the abandoned church there of the Holy Apostle and Evangelist Mark. At one point, at the will of God, he uncovered a cave at the Southeast side of the mountain, where he decided to live in asceticism. There he lived with fasting, vigil and prayer day and night.

The Lord, beholding his spiritual feats, bestowed on him many spiritual gifts, among which was clairvoyance. He foretold the great and terrible earthquake of Chios in 1881. Soon, his fame grew, and the abandoned church of St. Mark was transformed into a Skete, where St. Parthenios and his disciples performed their monastic duties.

All the people gathered from the various parts of the island to hear his sweet word and to seek his prayer and his blessing. Lazarios Zanaras the teacher relates that, without the will of the Saint, St. Parthenios performed many miracles in his life.

He reposed in faith on December 8th 1883.
(http://syndesmosklchi.blogspot.com/2011/12/8.html)
St. Parthenios of Chios on the Spiritual Struggle
This is how it is, brother of Christ by adoption: We step on earth and we look towards heaven. This will be repeated till the grace of God covers you and you come out as victor. Nevertheless, know the voice of God which says: "Did you fall? Arise." To fall is human. To remain fallen is satanic.

Our life is a battle, a struggle, and do not despair, no one comes out a victor if the struggle does not finish. The believer's despair is the demon's joy, and repentance is the angel's joy. Struggle as much as you can to gain the crown of life. Do not give up the weapons when you fall; attack again. Struggle to make the angels joyous.
(http://frbenedict.blogspot.com/2011/03/st-parthenios-of-chios-on-spiritual.html)

Note: St. Parthenios is missing from many Synaxaria, and I have been unable to officially confirm if he has been canonized, but may we all have his blessing, and may we emulate his example! 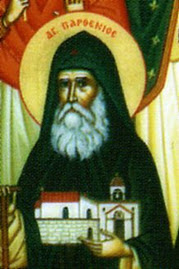 
Through the prayers of our Holy Fathers, Lord Jesus Christ our God, have mercy on us and save us! Amen!
Posted by Agioi_Anargyroi at 10:03 AM

I can be reached at: https://www.facebook.com/debpetr?fref=ufi