The Athonite Metochi (Dependency) of the Ascension of Christ, Vyrona, Attica 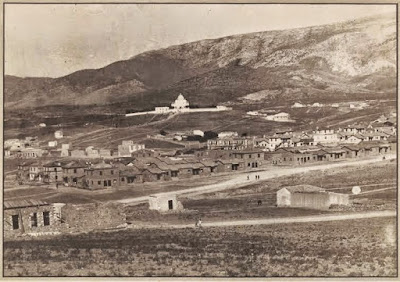 The Metochi of Simonopetra of the Ascension of Christ, Vyrona, as it appeared in 1924 (source)

An Athonite Metochi (Dependency) in Athens: The Metochi of Simonopetra of the Ascension of Christ, Vyrona, Attica
by Monk Moses the Athonite (+2014)
The only Athonite dependency in the capital city of Athens today is the beautiful church of the Ascension of Christ in the area of Pankratiou-Vyrona, a metochi of Simonopetra Monastery of Mount Athos. Holy Ascension was the most important spiritual centers. Regarding this, Monk Moses writes in his book of "Ieronymos of Simonopetra, the Elder of Holy Ascension", in Athens in 1982:

"Holy Ascension and Prophet Elisseus (Elisha) are the two deepest and refreshing centers in the center of Athens at that time (1931). There were constantly gathered Kollyvades, lovers of monasticism and Athonites, lovers of vigils, services and feasts, and humble lovers of virtue. Holy Ascension was frequented by St. Nicholas Planas, St. Savas of Kalymnos, Elder Philotheos Zervakos, St. Amphilochios Makris, Athanasios of Neratziotissas, and many Athonite Fathers, who show all together that holiness lives even to our days.

The history of the Church of Holy Ascension begins at the begin of our century. The Elder Levite Ignatios, the uncle of the learned Monk Neilos of Simonopetra, with his will "unto memory of his parents and his" left that piece of property to the Monastery. Then, the area around was totally uninhabited and a lot of time was needed before a road could be built to reach the area. 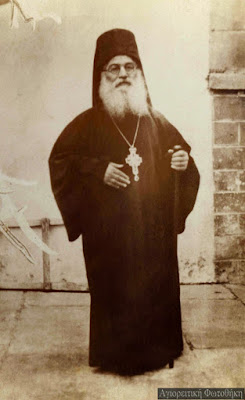 Blessed Elder Ieronymos of Simonopetra, who was the caretaker and spiritual father of the Metochi in Vyrona for 26 years (source)

From then on, good Athonite Spiritual Fathers and stewards of the Metochi, with vigils, holy confessions and sermons made this place known to the thirsting Athenians. The forebearers of Elder Ieronymos, Panaretos and John, spiritual fathers from Katounakia, Methodios of Kavsokalyvia, the great cave-dweller Panaretos and Matthew the spiritual father left many examples of the spiritual life for their church-goers..."

Elder Ieronymos's time served as a major period in the history of the Metochi with his virtuous life, his sermons, holy confessions, his almsgiving and his many gifts.

To this day, daily services occur there according to the Athonite typikon, and there are frequent vigils. The Metochi serves as a good witness of Mount Athos to the capital city. Besides those who live there, who love it greatly, there are many lovers of Mount Athos who travel their to participate in services.
(source) 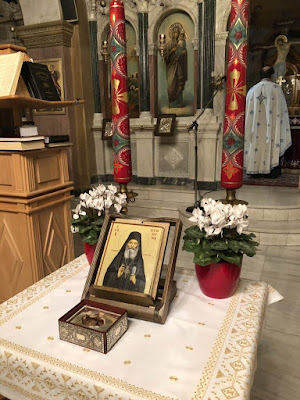 The Holy Icon and Relics of St. Ieronymos of Simonopetra (Source)

Announcement at the Recent Canonization of Elder Ieronymos of Simonopetra
With feelings of holy contrition and joy, it was made known the recent canonical decision of our Sacred Ecumenical Patriarchate regarding the numbering among the Saints of our Orthodox Church of our greatly-honored St. Ieronymos of Simonopetra, who was known as "Elder of the Ascension."
His holy memory is ordained to be served yearly on May 9th [the day of the Uncovering of his Relics, as the Saint reposed on the great feast of Theophany].
The Holy Dependency has the special blessing to have the grave of the Saint, along with a portion of his Holy Relics.
According to the request of the faithful, they are put forward for veneration daily from:
6-11:30am,
and 5:30-8:30pm.
Services during the winter hours take place according to the following schedule:
Daily Orthros and Divine Liturgy 6-8:30am.
Sunday Liturgies and Feast Days 6-10:30am.
Daily Vespers 5:30pm-6:30pm.
Vigils 8pm-1am, such as upcoming for the feast of St. Nicholas on December 6th and December 13th (with the service of St. Ieronymos).
(source) 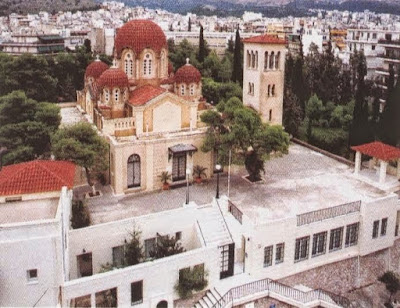 The Metochi of the Ascension as it appears today (Source)
Through the prayers of our Holy Fathers, Lord Jesus Christ our God, have mercy on us and save us! Amen!
Posted by Agioi_Anargyroi at 8:46 AM