The Sacrifice of Abraham as a Foreshadowing of Christ 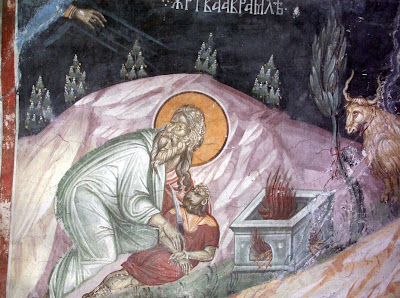 The Sacrifice of Abraham (http://www.srpskoblago.org/Archives/Gracanica/exhibits/digital/s3-e1e2/large/s3-e1e2-16.jpg)

The Sacrifice of Abraham as a Foreshadowing of Christ
"A year after the appearance of God to Abraham in the form of three strangers, the prophecy of God was fulfilled. Abraham and Sarah gave birth to a son whom they called Isaac. Abraham was then one hundred years old and Sarah ninety. They loved their only son very much.

When Isaac grew up, God wished to elevate the faith of Abraham and thus teach all men through him to love God and obey His will.

God appeared to Abraham and said, "Take now thy son, thine only son Isaac, whom thou lovest, and get thee into the land of Moriah, and offer him there for a burnt offering upon one of the mountains which I will tell thee of."

Abraham obeyed. He was very sorry for his only son, whom he loved more than his own self. He loved God more than everything, he had perfect faith in Him and knew that God never desires anything evil. He rose early in the morning, saddled a donkey and took his son Isaac and two servants with him. He also took wood and fire for the sacrifice and set out on his way.

On the third day of the journey they came to the mountain which the Lord showed him. Abraham left the servants and the donkey at the foot of the mountain, took the fire and knife, loaded the wood on Isaac, and went with him to the mountain.

When they both were climbing the mountain, Isaac asked Abraham, "My father, we have fire and wood, but where is the lamb for a burnt offering?"

Abraham answered, "My son, God will provide a lamb for Himself."

The Sacrifice of Abraham (source)
They both went further and came to the top of the mountain to the place indicated by the Lord. There Abraham built an altar, laid out the wood, bound his son Isaac and placed him on the altar on top of the wood. He lifted the knife in order to slay his son, but then the angel of the Lord called to him from Heaven and said, "Abraham, Abraham ... lay not thy hand upon the lad, neither do thou anything unto him, for I know that thou fearest God, and for that reason thou hast not begrudged thine only son for Me." Not far away, Abraham saw a ram caught in a bush, and he offered it in place of Isaac.

For such faith, love, and obedience God blessed Abraham and promised him that he would have as many offspring as the stars in the heavens and the sand on the shore of the sea, and that in his offspring all the peoples of the earth would receive a blessing, that is, the Saviour of the world would come forth from his descendants.

The offering of Isaac in sacrifice was a prefiguration to men of the Saviour, Who, being the Son of God, would be offered by His Father as a sacrifice for the sins of all men by death on the Cross.

Isaac, appearing as a prefiguration of the Saviour over two thousand years before the Birth of Christ, foreshadowed, according to God’s will, Jesus Christ. He, like Jesus Christ, went without complaint to the place of sacrifice. As Jesus Christ bore the Cross Himself, so Isaac himself carried the wood for the sacrifice.

The mountain on which Abraham offered Isaac in sacrifice received the name of Mount Moriah. Later, at God’s command, King Solomon built the Temple of Jerusalem on this mountain. 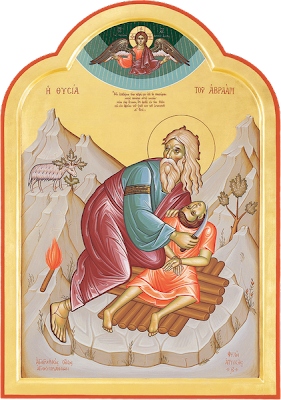 The Sacrifice of Abraham (http://1.bp.blogspot.com/_Ir0BxevvGe4/TMEv8q_vfQI/AAAAAAAAAus/ReTyhTMjmyU/s600/Thysia-Avraam.png)

"As you contemplate the [bundles of sticks that Isaac was laid upon] reflect on the cross. As you look on the fire, meditate on the love. Look too, on the sheep hanged by its two horns on the plant that is called ‘Sabek’. Look too, on Christ, the Lamb of God, hanged by his two hands upon a Cross. The plant called Sabek means ‘forgiveness’, for it saved from slaughter the old man’s child, It foreshadows the cross that forgives the world its sins and grants it life. The ram hanging on the Sabek plant mystically redeemed Isaac alone, While the Lamb of God hanged on the cross delivered the world from Death and Hell."
St Ephrem the Syrian,'On Abraham and Isaac'
(http://web.ukonline.co.uk/ephrem/AbrIsaac.htm, http://www.orthodox.net/gleanings/cross.html) 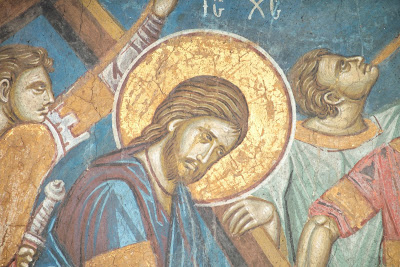 
Through the prayers of our Holy Fathers, Lord Jesus Christ our God, have mercy on us and save us! Amen!
Posted by Agioi_Anargyroi at 2:39 PM