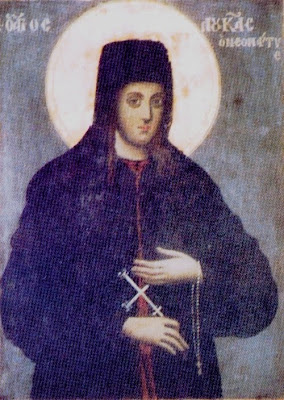 St. Luke the New Righteous Martyr of Mytilene - Commemorated on March 23rd (http://vatopaidi.files.wordpress.com/2010/03/agios-loukas-neomartys-en-mytilini.jpg)
He was born in Adrianoupolis. At six years of age he lost his father, and his mother, unable to handle the difficulties in raising the small Luke, entrusted him to a merchant from Zagora of Peliou, who traveled with him to Russia and Constantinople. Thus Luke was able to visit far awat lands. At a young age, he fought with a Turkish boy, and because of this he was seized by the Turks and forced him to become a muslim. He fled from the house of the Turk where he was staying, and met with his adopted father, who sent him to Smyrna. There near a spiritual father he confessed his passion and with tears in his eyes, he was told to go to the Holy Mountain to flee from further dangers. In the Garden of the Panagia, he met righteous elders, such as Fr. Ananias of St. Anna and Elder Bessarion, who strengthened him in faith and love towards Christ, His desire to cleanse the weight of his sin of denying Christ, caused him to seek a way to leave the Holy Mountain [with the blessing and spiritual preparation of his spiritual father for martyrdom], which occurred when a friend of Elder Bessarion was preparing to leave Mount Athos and head to Tenedo and Mytilene. In Pamphila where the righteous Luke arrived, he came to know the priests at the church of St. Barbara, Frs. Gregory and Parthenios. After fervent supplications and meditation on the martyrdom of St. Theodore (http://full-of-grace-and-truth.blogspot.com/2009/02/holy-neomartyr-st-theodore-byzantine.html), who had been martyred seven years before in Mytilene, St. Luke appeared before Nazer the Aga of Mytilene, and with bravery of soul sought to bear witness as a Christian. He was imprisoned and martyred by hanging on March 23rd 1802.
(amateur translation of text from: http://www.immyt.net/saints/martyrs9.htm; more complete biography in Greek available here: http://vatopaidi.wordpress.com/2010/03/23/%ce%bf-%ce%ac%ce%b3%ce%b9%ce%bf%cf%82-%ce%bd%ce%b5%ce%bf%ce%bc%ce%ac%cf%81%cf%84%cf%85%cf%82-%ce%bb%ce%bf%cf%85%ce%ba%ce%ac%cf%82/) 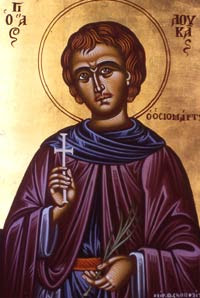 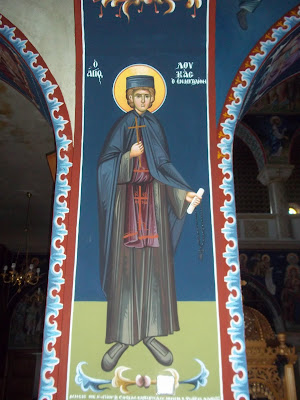 St. Luke the New Righteous Martyr of Mytilene (http://4.bp.blogspot.com/-FAgdanSyhK0/ThX0H8qFSWI/AAAAAAAAIPg/tozAS5i1JXg/s1600/102_3368.JPG)
Through the prayers of our Holy Fathers, Lord Jesus Christ our God, have mercy on us and save us! Amen!
Posted by Agioi_Anargyroi at 12:06 PM