St. Theodora the Righteous, Queen of Arta and Epiros 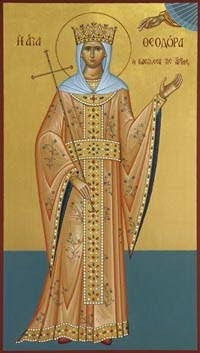 St. Theodora the Righteous, Queen of Arta and Epiros - Commemorated on March 11th (http://3.bp.blogspot.com/_ahw5m8lrDls/S5axwI-ikdI/AAAAAAAAAIY/umnjEbrDJDA/s1600-h/agtheodwra+1.jpg)
“Theodora has been one of the most emblematic figures of Arta, queen of Epirus and later on a saint of the city. Religious and modest she devoted her life to God, although she had quite an unsettling life...

Descendant of the family of Petralife, an Italian family from Alife, a town near Caserta in the south of Italy, Theodora was, according to the historical sources, related to Petro di Alife, one of the crusaders that participated in the First Crusade during the 11th century.

Her father was Ioannis Petralife, commander of Thessaly and Macedonia, while her mother Helen was member of an aristocratic family in Constantinople.

Born in 1210 in Serbia of Kozani and soon after her father’s death she was taken under protection by the ruler of Epirus, Theodoros Aggelos Komninos. From 1224 until 1230 she remained under his custody. In 1230 and soon after his defeat by the Bulgarians, Theodoros gave away his throne to his nephew Michael II and son of Michael I who founded Epirus. Komninoi Doukes settled in Epirus just after the 1204 crusades in Constantinople. 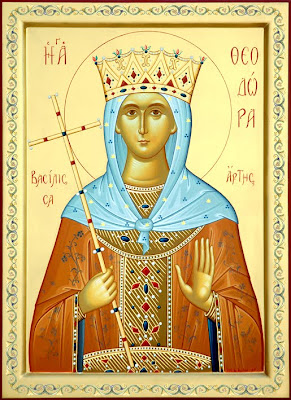 St. Theodora, Queen of Arta (http://1.bp.blogspot.com/-ZgC7parKKts/T24BlzyV54I/AAAAAAAACyI/kLw_zxyee2A/s1600/ag-Theodora-1-2.jpg)
Michael II met young Theodora and was impressed by her beauty and her character so much that he asked her to marry him. As soon as they got married, Theodora moved to Arta where she became queen.

The couple was not at all compatible. On the one hand, Theodora was very religious and on the other hand Michael enjoyed the carnal relationships. Unable to follow Michael in his social life, Theodora was forced to withdraw and the gap between them started to grow bigger. At this point the ruler of Epirus fell in love with Gaggrini, a local woman belonging to the high society of Arta. His love for this woman pushed him to bring her in the Royal Courtyard and soon next to him on the throne of Epirus, together they had two sons. It was at this point that Queen Theodora decided to abandon the palace, wondering for almost five years on the Mountains of Tzoumerka.

According to the author of her biography, monk Job who lived in the 17th century, Theodora, escorted by her son Nikiforos, was wondering on the mountains for almost five years feeding only on cabbages. Although she was suffering, Theodora never lost her faith to God. After five troubled years a priest from Prenista, today known as Korfovouni, took her in and offered her a shelter. 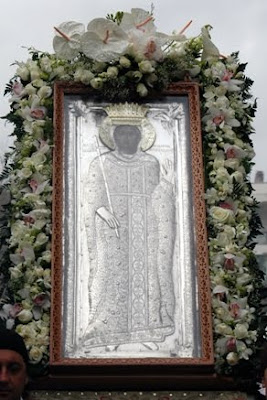 The icon of St. Theodora of Arta being carried in procession (http://www.imartis.gr/imartis/eidiseis.php?action=fullnews&showcomments=1&id=87)
Theodora was eventually traced down. The people of Arta, who adored her for her modesty, religiousness and philanthropies, outraged by the vicious life of Michael II, demanded her return to the palace as the lawful Queen. Michael II was confronted with this public demand and was ‘forced’ to take Theodora back, at the same time Gaggrini was forced to leave the royal courtyard.

The queen continued her work and philanthropies more intense than ever. She had four more children; Ioannis, Demetrios, Helen and Anna and she was now following Michael everywhere. In a gesture of sincere regret for his behaviour towards his wife, Queen Theodora, Michael built many glorious byzantine monuments in Arta. He founded the monastery of Kato Panagia, owned by Theodora, the Monastery of Panagia Vlahernon in the local village of Tzoumerka Mt and the monastery of Aghios Georgios where Queen Theodora retreated after Michael’s death in 1270. In this very monastery she spent the last ten years of her life until her death in 1280 or 1281.

Theodora was procured a saint (Aghia) by the people of Arta who honoured her in this way for her devotion to God and her philanthropies. She was buried in the monastery of Aghios Georgios, which eventually became a temple named after her.

Theodora’s memory is honoured every year on 11th March and her remains are still kept in a silver case on the right hand side of the temple. The case is shown every year on 11th March around the city. Additionally, her figure is depicted on the iconographies of the monastery of Kato Panagia.”
(http://www.artainfo.gr/artagreece/artaprefecture/importantpersons/agiatheodora/index.html) 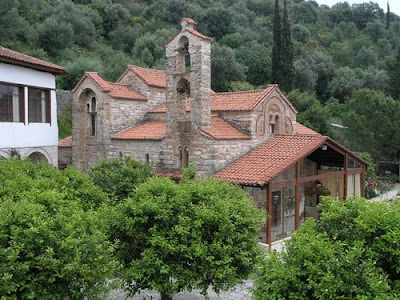 The Monastery of Kato Panagia, built by St. Theodora of Arta (http://www.imartis.gr/imartis/katopanagia.htm) 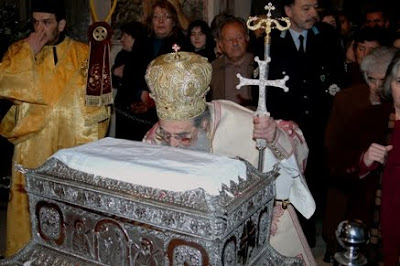 For the full life of the Saint in English, translated by Talbot, see: http://www.doaks.org/publications/doaks_online_publications/HolyWomen/talbch10.pdf. 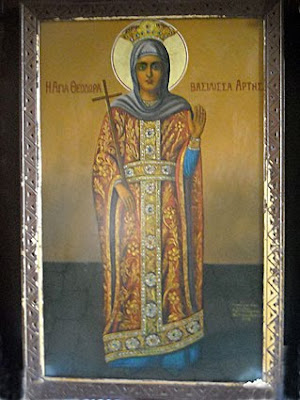 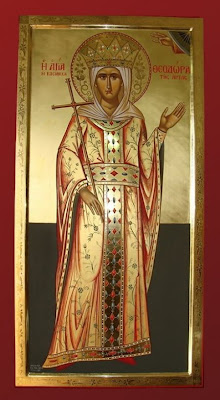 Through the prayers of our Holy Fathers, Lord Jesus Christ our God, have mercy on us and save us! Amen!
Posted by Agioi_Anargyroi at 8:49 AM