The Saturday of the Akathist Hymn, and the miraculous icon of Panagia of the Salutations, or Panagia the Myrrh-streamer 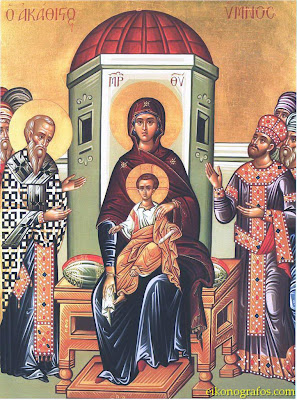 The Akathist Hymn to the Most-Holy Theotokos (Icon courtesy of www.eikonografos.com used with permission)

Saturday of the Fifth Week of Great Lent: The Saturday of the Akathist Hymn
"About the year 626, the Persians, Avars, and Slavs came with a great host and besieged the imperial city of Constantinople while the Emperor Heraclius and the main body of the Byzantine army were absent in the East. Enemy ships filled the sea, especially the Golden Horn, and on land the adversaries were ready for attack with foot-soldiers, horses, and engines of war. Though the citizens courageously withstood them, yet they were few in number and would be unable to repulse the attack of such a great host. Hence, they could not count on any other means of salvation, except the protection of the Theotokos. And truly, suddenly a violent tempest broke up all the ships and submerged them, and the bodies of the invaders were cast out near the Blachernae quarter of the city where the famous Church of the Theotokos stood. Taking courage from this, the people went forth from the city and repulsed the remaining forces, who fled out of fear. In 673, the city was miraculously delivered yet again, this time from an invasion of the Arabs. Then in 717-718, led by the Saracen general Maslamah, the Arab fleet laid siege once more to the city. The numerical superiority of the enemy was so overwhelming that the fall of the Imperial City seemed imminent. But then the Mother of God, together with a multitude of the angelic hosts, appeared suddenly over the city walls. The enemy forces, struck with terror and thrown into a panic at this apparition, fled in disarray. Soon after this, the Arab fleet was utterly destroyed by a terrible storm in the Aegean Sea on the eve of the Annunciation, March 24, 718. Thenceforth, a special "feast of victory and of thanksgiving" was dedicated to celebrate and commemorate these benefactions. In this magnificent service, the Akathist Hymn is prominent and holds the place of honour. It appears that even before the occasion of the enemy assaults mentioned above, the Akathist Hymn was already in use as the prescribed Service for the Feast of the Annunciation, together with the kontakion, "When the bodiless one learned the secret command," which has the Annunciation as its theme. It was only on the occasion of the great miracle wrought for the Christian populace of the Imperial City on the eve of the Annunciation in 718 that the hymn "To thee, the Champion Leader" was composed, most likely by Saint Germanus, Patriarch of Constantinople.

Historians have ascribed the Akathist Hymn to Patriarch Sergius of Constantinople (638), to Saint George the Confessor, Bishop of Pisidia (818), or even to Saint Photius the Great (891), all of whom lived either at the time of or after the above-mentioned sieges. However, it appears most likely from its language, content, and style that the true composer of the Akathist Hymn is Saint Romanus the Melodist (6th century)."
(http://goarch.org/chapel/saints_view?contentid=901&PCode=5LENTSa&D=SA&date=3/20/2010) 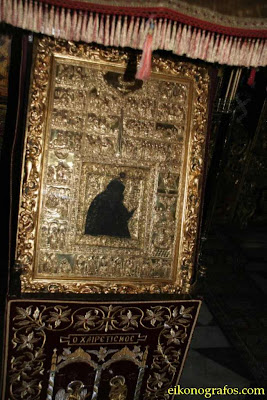 Holy Monastery Dionysiou - Panagia of the Salutations the Myrrhgusher
"According to an inscription on the back of this icon, it was given as a gift to Saint Dionysius, founder of the Holy Monastery of Dionysiou on Mount Athos, by Emperor Alexios Komnenos, upon his visit to Trebizond in Asia Minor. According to Holy Tradition, this is the same icon that Patriarch Sergius processed around the walls of Constantinople in 626 A.D. during the reign of Emperor Heraclius. At that time Constantinople was attacked by the Persians and "Scythians" (Avars and Slavs) but saved through the intervention of the Most Holy Theotokos. A sudden hurricane dispersed the fleet of the enemy, casting the vessels on the shore near the great Church of the Theotokos at Blachernae near the Golden Horn. The people spent the whole night in front of this icon thanking her for the unexpected deliverance. In memory of this event the Akathist Hymn is chanted in the Orthodox Church.

In 1592 Algerian pirates stole the icon, but after a fierce storm, a frightening dream, and a great miracle, the leader of the pirates was forced to return it to the monastery. They had hid it in a chest, but the icon shattered it and it was drenched in myrrh. Because of this miracle, some pirates repented and entered the monastery to become monastics.

In 1767 certain theives from Dalmatia stole the icon, and upon their return to Dalmatia were apprehended by Greek shepherds who took the icon and brought it to Skopelos. On Skopelos island the Greek community leaders elected by the Turks, known as Dimogerontes, denied to the Dionysian monks from Mount Athos the return of the icon when they came to request its return. After three months Skopelos was punished by a plague which brought great tragedy to the island, and the Dimogerontes repented and had the icon returned to Dionysiou Monastery and also established a metochion for the monastery on the island.

The icon is small and darkened by time. It is housed in a chapel dedicated to the icon at Dionysiou Monastery where the Akathist Hymn is sung daily."
(http://www.johnsanidopoulos.com/2010/02/three-miraculous-athonite-akathist.html)
Panagia herself, appearing to the Saints has said: “I will love, I will protect, I will shelter every faithful person who greets me every day that he us able with the beautiful hymns of My Salutations, and who lives in accordance with the law of God. And on the last day of his life, I will defend him before My Son.”
(amateur translation of text from: http://www.pigizois.net/galery/xeretismoi%20theotikou/panagia_ton_xeretismon.htm)

For the text of the Akathist Hymn, see: http://full-of-grace-and-truth.blogspot.com/2010/03/akathist-hymn-to-most-holy-theotokos.html. 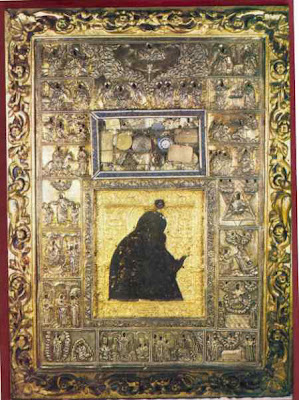 Panagia of the Salutations, Dionysiou (http://www.pigizois.net/galery/xeretismoi%20theotikou/eikona_akathistou.jpg)
Apolytikion in the Plagal of the Fourth Tone
When the bodiless one learned the secret command, in haste he came and stood before Joseph's dwelling, and spake unto the Maiden who knew not wedlock: The One Who hath bowed the Heavens by His descent is held and contained unchanging wholly in thee. Seeing Him receiving the form of a servant in thy womb, I stand in awe and cry to thee: Rejoice, thou Bride unwedded.

Kontakion in the Plagal of the Fourth Tone
To you, Theotokos, invincible Defender, having been delivered from peril, I, your city, dedicate the victory festival as a thank offering. In your irresistible might, keep me safe from all trials, that I may call out to you: "Hail, unwedded bride!"
(http://goarch.org/chapel/saints_view?contentid=901&PCode=5LENTSa&D=SA&date=3/20/2010)

(taken from the Paraklesis to the icon of the Theotokos of the Akathist (in Greek): http://www.pigizois.net/latreia/paraklitikoi_kanones/pdf/paraklitikos_kanon_panagias_akathistou.pdf)

Apolytikion of the Icon of Panagia of the Akathist in the First Tone (amateur translation)
Your Holy icon of the Akathist, our Mother, we now venerate all-reverently, and we glorify You, O Lady. For our protections towards us has come and it pours forth healings from sympathy-from all dangers and sorrows drive away, as we cry out in thanksgiving: Glory to God Who glorified You, glory to Him Who magnified You, glory to You who saved us through Your giving birth! 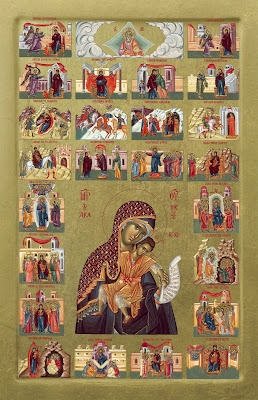 Modern rendering of the wondrous Icon of the Theotokos "Of the Akathist Hymn" from Dionysiou Monastery, Mount Athos (source)
Through the prayers of our Holy Fathers, Lord Jesus Christ our God, have mercy on us and save us! Amen!
Posted by Agioi_Anargyroi at 3:37 PM