Excerpt from the Homily on the Annunciation, by St. John Chrysostom 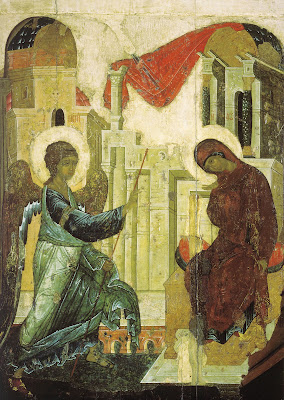 The Annunciation of the Theotokos (source)

Excerpt from the Homily on the Annunciation, by St. John Chrysostom (amateur translation)

And he [the Archangel] received all the commandments like these [from the Lord]: “Come, O Angel, become a servant of this awesome mystery. Serve this hidden wonder, as an answer to fallen Adam, who will come under my compassion. Sin has made he that is fashioned in my image to grow old, and has soiled my creation, and has darkened where I created beauty. The wolf has scattered my flock. The dwelling place of Paradise has become a desert. The Tree of Life is guarded by the flaming sword, and the place of nourishment is closed. I have mercy on him who was attacked, and I wish to make war with him who fought against him [i.e. the devil]. I wish for all of the heavenly powers to know, but to you alone I impart the mystery. Go to the Virgin Mary, go to the Spiritual Gate, of which the Prophet said: “Glorious things have been said of you, O City of God.” Go to my Rational Paradise. Go to the Eastern City. Go to her who is the worthy dwelling-place of the Word. Go to the second Heaven on earth. Go to the Light Cloud. Tell her of my coming, the Thunderstorm. Go to her who is my prepared holy place. Go to the Bridal Chamber of my incarnation. Go to the pure Bridal Chamber of my nativity in the flesh. Speak to the ears of this rational Ark, to prepare the entrance of my hearing. But do not be fearsome, do not trouble the soul of the Virgin...First cry out to her with a voice of joy, and tell Mariam: “Hail, O Full-of-grace,” that I might have mercy on Eve, who is full-of-shame.”

The Angel [Gabriel], having heard what was spoken to him, said: “Strange is this thing, surpassing every thought to speak. He Who is awesome to the Cherubim, and invisible to the Seraphim, He Who is incomprehensible to all the Angelic Powers, is proclaimed to become nature!”

...But having truly all of this, the Physician has come to the sick, and the Sun of Righteousness has dawned for those who sat in darkness, the Anchor and Calm Harbor to those storm-tossed, the Intercessor has been born for the despised slaves, and peace has been united, and the Redeemer of captives has come, the strong unspeakable Joy and Love and Protection has come for those who are embattled. He is our peace, as the divine Apostle says, through Whom we have all received grace, Christ our God, to Whom belong glory to the ages of ages. Amen.
(source)
Through the prayers of our Holy Fathers, Lord Jesus Christ our God, have mercy on us and save us! Amen!
Posted by Agioi_Anargyroi at 8:25 PM

Labels: St. John Chrysostom, The Annunciation of the Theotokos, The Most-Holy Theotokos, Writings of the Saints

Thank you for translating and posting the sermon.

however the sermon above is from the Four Great Homilies by St. Gregory Thaumaturgus and not St. John Chrysostom.