Excerpts from the Kontakion on the Holy Forty Martyrs, by St. Romanos the Melodist 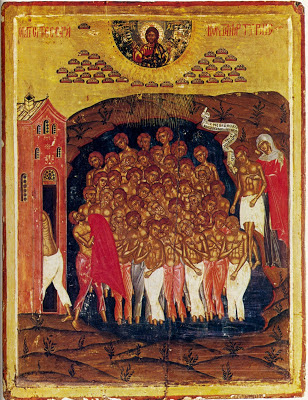 Excerpts from the Kontakion on the Holy Forty Martyrs, by St. Romanos the Melodist (amateur translations below, with the exception of the first two sections)

Proemion I
When you had forsaken every worldly battalion, then you joined yourselves unto the Master in heaven, as the Lordʹs forty‐numbered contenders who won the prize. Inasmuch as you have gone through fire and through water, O blessed ones, you worthily received * heavenly glory from on high, and manifold crowns.

Oikoi
O Christ the Ruler over all,
Our Creator and God,
The One who is carried on an insufferable throne,
Who stretched out the heavens like a curtain,
Established the earth, and gathered the water into its places,
Who brought all things from nothingness into being,
And who gives breath and life to all,
Who receives praise from the Archangels,
And is glorified by Angels and worshipped by all:
I the unworthy come before You and bring my prayer,
Asking for the grace of speech,
So that I may piously extol the holy Martyrs,
Whom You showed to be victorious,
And to whom You have given
heavenly glory from on high, and manifold crowns.
(source)
The champions were arrayed with all wisdom,
In a manner surpassing encomiums,
As they fought Satan,
And trampled upon the band of the idols.
They deposed irreverence in favor of reverence.
These steadfast ones were preachers of piety.
They, without a doubt, were teachers of precision.
They ever heal the sick, and deliver from evil spirits.
They make the blind see and cleanse lepers.
They raise up from the dung hill and lift up the fallen.
They are the harbor for those who sail,
They are the good fellow-traveling guides.
They especially protect from tyrants, as the band that received
Heavenly glory from on high, and manifold crowns.

Surpassing the light of the sun
Shines this joy of the Saints.
For though the sun can be covered by clouds,
The Saints are never succeeded by night.
The sun makes jewels to shine,
And after it sinks at dusk, again it comes back to all.
This all-joyous and radiant lamp of the Saints
Proclaims the day,
While the night again is greatly amazed
How they were able to traverse the hurricane of deeds.
For they stand full of glory beside Him Who glorifies the faithful,
And they hear from Him: "You glorified me upon those on the earth.
Now I will confess you in the highest,
Granting you good things,


Heavenly glory from on high, and manifold crowns.


O wise beloved ones of the all-wise Master,
And well-known children of Him Whom we know to be begotten [of the Father],
The accountable army of Jesus our God Who enlisted you,
The wondrous flock of the wondrous Shepherd,
And the sowing of the Sower,
For He pours forth the waters of an ineffable spring upon them.
O divine branches of the divine Vine,
And holy shoots from the holy Root,
As the beloved creations of the Creator of all,
And the all-joyous gathering of the Pure Lord,
The disciples of Christ, the Savior of all, Who gathered them together,
And ordained that they dwell in the living pastures,
Granting to them
Heavenly glory from on high, and manifold crowns.

Greatly they were exalted by the Fashioner,
And with the Angels they celebrate,
The unconquerable phalanx of forty athletes.
For as ones bearing victory,
They rejoice together with the Saints of all ages in the highest,
Being arrayed with holy and spotless garments
From their struggles,
And through faith received the crown,
That is praised by all of the noetic powers
As a worthy bride standing beside the Lord,
The Good Bridegroom, which He adorned through His gifts,
Ever shining with divine jewels,
For they were made worthy to receive

Heavenly glory from on high, and manifold crowns.
Which mouth is sufficient to praise,
Which tongue is strong enough to hymn
The holy martyrs, who left the fleeting glory towards that to come,
Who separated themselves from the devil
And joined themselves to our Savior with faith,
Who broke apart every sin
And were united to righteousness,
Who are inapproachable in commendations,
Who fled from the whole land of error
And preached Orthodox dogma everywhere,
The soldiers of Christ, who ever fight on behalf of the faithful,
And fervently make war against the enemies of God?
For to them was granted

Heavenly glory from on high, and manifold crowns.
They were shown strong in war,
And again, they were shown very strong in struggles,
These all-joyous ones, who were from various and sundry places.
One was their desire in one harmony
To worship the God of all with their whole soul.
They were one of mind and one of knowledge in truth,
As they fled delusion,
As they stood against distortion,
As they partook of good things,
As they received crowns as ones worthy, through their steadfastness.
Forty, they appeared, the athletes of Christ,
Who glorified Christ, the only Redeemer,
Who granted them

Heavenly glory from on high, and manifold crowns.

My soul is unable to recount
Of the divine multitude with one heart,
Though divided in forty bodies and known as one.
Therefore, they fled from the tortures of the north
And bravely resisted the devil.
I would need forty tongues
To be able to hymn
Those who with one tongue
Clung to and hastened to the noetic powers
Which, together with them, sing a holy song that cannot be silenced
To God in the highest, Who separated them from the fleeting dangers
And united them to His servants,
For He granted them

Heavenly glory from on high, and manifold crowns...
Mighty is the way of the athletes,
For they waged war against the enemies
As when Moses warred against Amalek, lifting his eyes towards the Lord,
His nous and heart soaring to the heights
Together with his hands and all his senses,
And therefore truly, with many entreaties
And lifting his hands with his heart
He reached Him Who is in the highest.
He was upheld by Aaron and Or, as it is written,
And he upheld them with faith and hope, as we know.
Moses was therefore shown a victor, teaching all to turn to God,
And that the way of the faithful is victory through prayer,
Showing as they received

Heavenly glory from on high, and manifold crowns...
(source)


Through the prayers of our Holy Fathers, Lord Jesus Christ our God, have mercy on us and save us! Amen!
Posted by Agioi_Anargyroi at 6:09 PM

Labels: Hymns, Kontakia of St. Romanos the Melodist, The Holy Forty Martyrs of Sebaste, Writings of the Saints